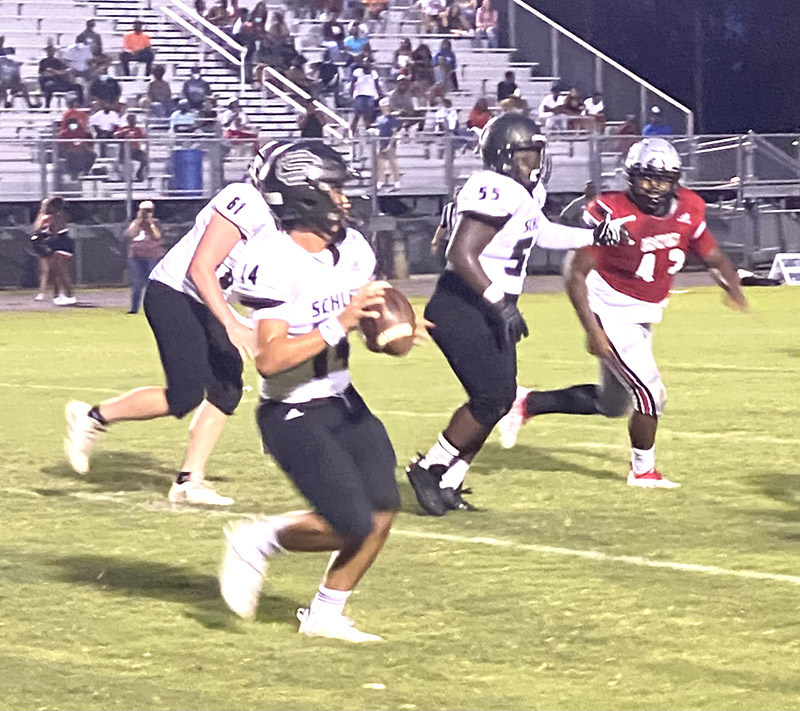 OCILLA, GA – Coming off a solid performance in their 35-14 win over Tiftarea Academy in their first scrimmage game the week before, the Schley County Wildcats (SCHS) went down to Ocilla on Friday night, August 13 to test their medal against back-to-back GHSA Class A-Public State Champions Irwin County (IC). After the game, SCHS Head Coach Darren Alford told the Americus Times-Recorder that he scheduled this game because he wanted to see where his club is at as the season opener approaches. Though the Wildcats lost the scrimmage to the Indians 40-21, Alford got his answer and he is very pleased with it.

“I’m really proud of them because, I mean, we know what we’re playing. We’re playing the two-time defending state champions. They’ve got a lot of the kids coming back this year, so we knew they were good,” Alford said. “Now, I have a good idea of where we’re at. We have the potential, I feel like, to be a really, really good football team if we will continue to work hard and practice every day. The entire game, our guys played hard. They had a couple of miscues on defense, a couple of things that we’re supposed to do that we’ve worked on all week long, but we didn’t adjust on the play and we gave up some big plays.” 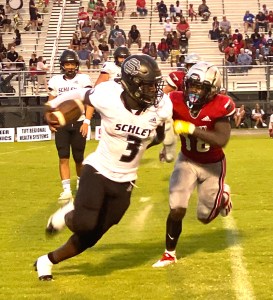 The first half was pretty much dominated by the Indians and the SCHS offense struggled to move the ball at times. While the Wildcats made some plays on the defensive side of the ball, the Indians were able to use their running attack to score both of their first half touchdowns. With 6:19 left in the first quarter, IC got on the board when running back Matthew Payne scored from two yards out. The PAT by Cooper Yanzetich was good and the Indians had a 7-0 lead.

With 3:13 to go before halftime, IC Running Back Shane Marshall scored the first of his three rushing touchdowns on the night from one yard out. Yanzetich’s PAT was good and the Indians led 14-0.

On their next possession, the Wildcats were able to move the ball into IC territory when SCHS Quarterback Jay Kanazawa connected with Jack Clark for an 11-yard gain at the IC 48.  However, the drive bogged down and SCHS was forced to punt.
The Wildcats’ defense was able to stop the Indians on their next possession and it gave the SCHS offense one last chance to get points on the board before halftime. However, as time ran out, Kanazawa was trying to run for yardage, but was sacked near the IC 35-yard line by Nehemiah McCoy to end the first half. 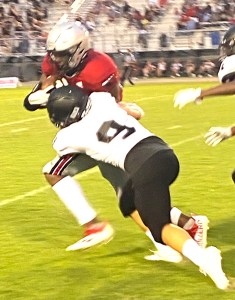 However, the momentum of the game would soon swing towards the Wildcats early in the second half. On the Indians’ first possession of the third quarter, IC Quarterback Cody Soliday threw a pass that was picked off by JaLewis Solomon, who ran the ball 45 yards back the other way for a SCHS touchdown. The PAT by Javier Lopez was good and just like that, the Wildcats were back in the game, trailing 14-7.

Then with 7:30 to go in the third quarter, the Wildcats tied the game when Kanazawa found Solomon for a 24-yard touchdown pass. Lopez’s extra point was good and the score was tied at 14-14.

However, the Indians would have a response. With 4:35 to go in the third, Marshall scored his second touchdown of the night from 14 yards out. The extra point by Yanzetich was good and the Indians had regained the lead 21-14.

However, the Wildcats fought back once again. With 3:26 to go in the third, Kanazawa threw a 22-yard touchdown pass to Luke Forehand. The extra point by Lopez was good and the game was tied at 21-21.

However, the IC running attack couldn’t be stopped on this night as Marshall scored his third touchdown of the game on a three-yard run with 53 seconds left in the third quarter. Yanzetich’s PAT was good and the Indians had the lead once again at 28-21. 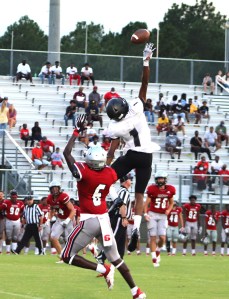 After three quarters of play, it was time to give the varsity players of both teams a rest and let the JV players get some experience. The IC JV Squad scored two more touchdowns to seal a 40-21 victory for the Indians, but all in all, the Wildcats put on a strong performance against the two-time GHSA Class A-Public State Champions.

“In the second half when JaLewis came out and had that pick six, that put a little fire in us and then the offense got lit up real good,” Alford said. “I was really proud of Jay (Kanazawa) at quarterback. He really, really showed some leadership tonight. He was getting a lot of pressure, but we worked through it. I’m proud of the overall effort that we had. Now, it’s for real. Deerfield-Windsor will come to us and we will see what we got next Friday night.”