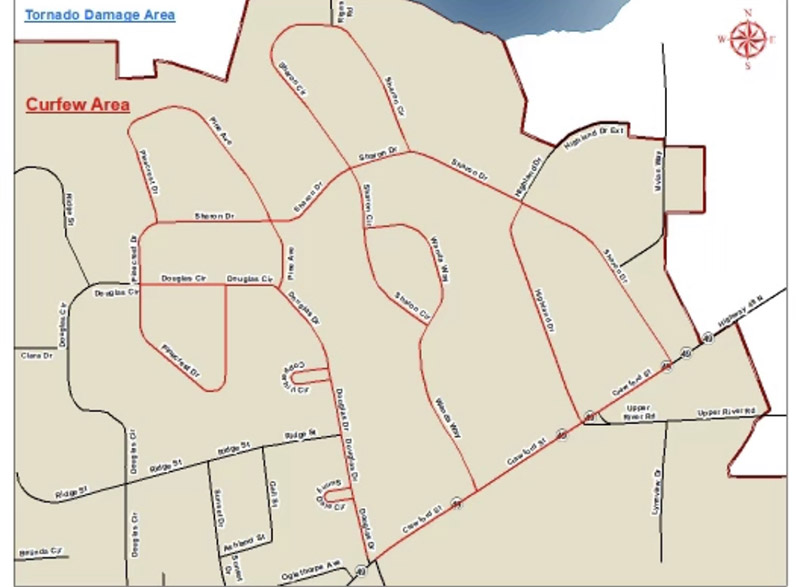 Americus Mayor Barry Blount and the Americus City Council issued an 8 p.m. curfew earlier this afternoon for those living along the streets and neighborhoods ravaged by Tuesday morning’s tornado. That curfew goes into effect at 8 p.m. and will last until 7 a.m. tomorrow morning. The streets that are listed subject to the curfew include all of Sharon Drive, all of Wanda Way, all of Sharon Circle, all of Douglas Drive, including Sunny Dale Circle and Copper Hill Circle, all of Pine Avenue, all of Pinecrest Drive and Douglas Circle to the intersection of Pinecrest Drive.

AMERICUS – At the Sumter County Board of Commissioners’ monthly meeting on Tuesday, August 17, Sumter County EMA Director Nigel Poole stated that Americus Mayor Barry Blount and the Americus City Council issued a curfew that will go into effect from 8 p.m. tonight until 7 a.m. Wednesday morning for the area that was ravaged by the tornado that took place at approximately 1:30 a.m. Tuesday morning.

Poole met with the Mayor Blount and the city council at 5 p.m. on Tuesday and they decided to implement the curfew. This curfew will be in effect from 8 p.m. tonight and will last until 7 a.m. Wednesday morning for these streets: all of Sharon Drive, all of Wanda Way, all of Sharon Circle, all of Douglas Drive, including Sunny Dale Circle and Copper Hill Circle, all of Pine Avenue, all of Pinecrest Drive and Douglas Circle to the intersection of Pinecrest Drive.

Poole stated that 124 residences in this area are still without power at this time and that those residences that are capable of receiving power will have their power turned on by noon tomorrow. “There are several residences that will not be able to receive power because of the damage from the storm pulling the entire side of the power source from the houses,” Poole told the BOC. Poole went on to say that those citizens have been told that they need to consult with electricians to make sure that their homes are ready to receive power.

In a press release that was sent to the Americus times-Recorder, Poole stated that

Americus Chief of Police Mark Scott and Sumter County Sheriff Eric Bryant both want to remind the citizens who are using generators to use them in well-ventilated areas and to not use them inside their homes.

Poole also stated that a shelter for those displaced by the tornado has been set up in the gymnasium of Central Baptist Church, which is located at the rear of the church at 190 Upper River Rd. here in Americus. For those who need assistance from the American Red Cross, Poole states that they can call 1-800-RED CROSS.

Americus Fire Chief, Roger Bivins reminds the citizens of Americus that burning is not allowed within the city limits of Americus.

For any additional information, please contact Sumter County EMA Director Nigel Poole at 229-815-9531 or email him at npoole@sumtercountyga.us.