Tornado touches down in Americus 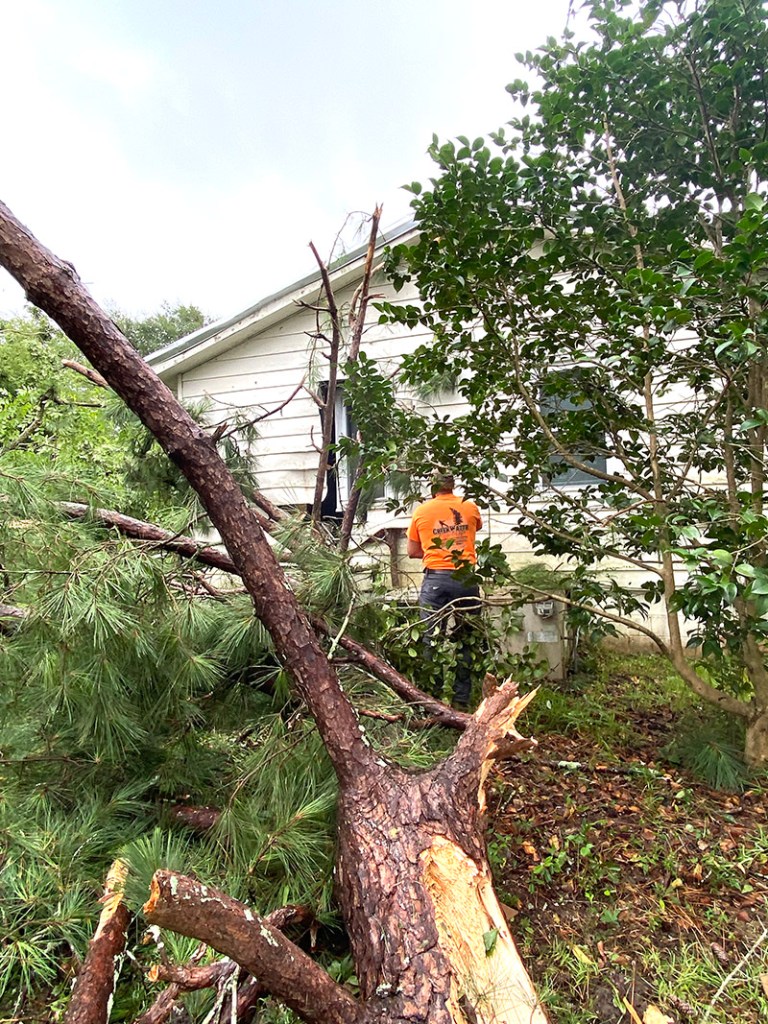 This is the house where Garrett Scarborough and his parents live on Douglas Dr. This tree fell right at the door that leads into Scarborough’s bedroom. Photo by Ken Gustafson

AMERICUS – At approximately 1:30 a.m. on Tuesday, August 17, a tornado ripped through the neighborhoods of Pine Avenue, Douglas Dr., Sharon Circle and Wanda Way knocking down trees, downing telephone and power lines and scattering debris throughout the area. Fortunately, no injuries or fatalities were reported.

“It was about 1:30 because I got a call about 1:45 and I got here at about 2 a.m.,” said Thomas Welch, who lives on Douglas Dr. “My little cousin was in his back bedroom sleeping and he heard the wind picking up and he said, ‘I don’t like the way this is sounding’ and he took about two steps out of his bedroom and that pine tree fell into the side of his house.” Herman Ekkle, the owner of Creek water Cowboys Tree and Fence Service, said that if Welch’s cousin hadn’t gotten up out of bed, the tree would have hit him. Welch’s cousin, Garrett Scarborough, told the Americus Times-Recorder that he was relaxing with his girlfriend when it all happened. “I heard the wind pick up but didn’t think anything about it. Just thought it was a normal, every day gust,” Scarborough said. “It picked up a little bit more and I just told her that I didn’t like the way it sounded and the lights flickered.” Scarborough went on to say that he told his mother that the power was out and that a storm was taking place. “She stepped out about a minute behind me and as soon as she stepped out the door is when it hit. It sounded like a gun shot,” Scarborough said. 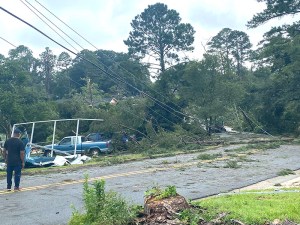 Trees and telephone/power lines were knocked down along Sharon Dr. as a result of a tornado that ripped through the area in the wee hours of Tuesday morning, August 17.
Photo by Ken Gustafson

A little ways down Douglas Dr., Wilma Lovette, who lives with her daughter, wasn’t able to hear what was going on due to bad hearing, but thanks to her daughter, she was able to get out and away from danger. “She (Lovette’s daughter) said that it come a hard rain and then it just got so quiet,” Lovette said. “And then, all of a sudden, it came down and she came in and woke me up and told me that I’d better get out. I’m scared of bad weather anyway. I just didn’t hear it, but it is terrible back here in this yard.”

Along the streets of Pine Avenue, Sharon Dr., Douglas Dr., Douglas Circle, Pinecrest Dr. and other nearby streets in the area, numerous trees, branches, telephone and power lines and scattered debris could bee seen everywhere. The sound of chain saws from the numerous tree removal crews could be heard as they, along with crews from Georgia Power, were their to try and remove trees and restore power to the residents of the area.

Trees fell on the roof and in front of this house as a result of the tornado.
Photo by Ken Gustafson

One of the hardest hit areas of the neighborhood was the area along Pine Avenue and Sharon Dr. Numerous trees, along with telephone and power lines, were knocked down. Some of them fell on cars and houses. George Holt, who lives at the corner of Pine Avenue and Sharon Dr., said that at about 1:30 a.m., he heard his alarm go off and thought at first that someone was trying to break into his house. “I looked around and I saw all the trees down and the car port flipped upside down and stuff,” Holt said. “Me and my wife, we came out and looked around. It’s a mess. We’ve got a bunch of trees down…debris, we’ve got a lot of damage around here. It’s just material stuff. I just thank God. As far as I know, there were no fatalities.” 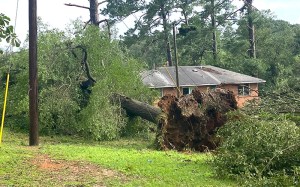 A tree in the front yard of a house on Pine Avenue was ripped from its roots by a tornado that touched down in this neighborhood during the early morning hours of Tuesday, August 17.
Photo by Ken Gustafson

According to Sumter County EMA Director Nigel Poole, it will take at least a couple of days for power to be restored in the areas affected by the tornado. 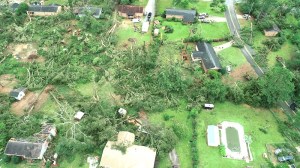 “We don’t have an idea yet,” Poole said. “It’s bigger than we thought it was. When we saw it this morning, it was bigger than we expected. It’s going to be a couple of days for sure before they can get it back because they’re going to have to install not only lines, but we have 68 homes that have complete removal from their homes to the breakers, so it’s going to be a while, a couple of days at the fewest.”