Rough first half leads to loss for Panthers in season opener 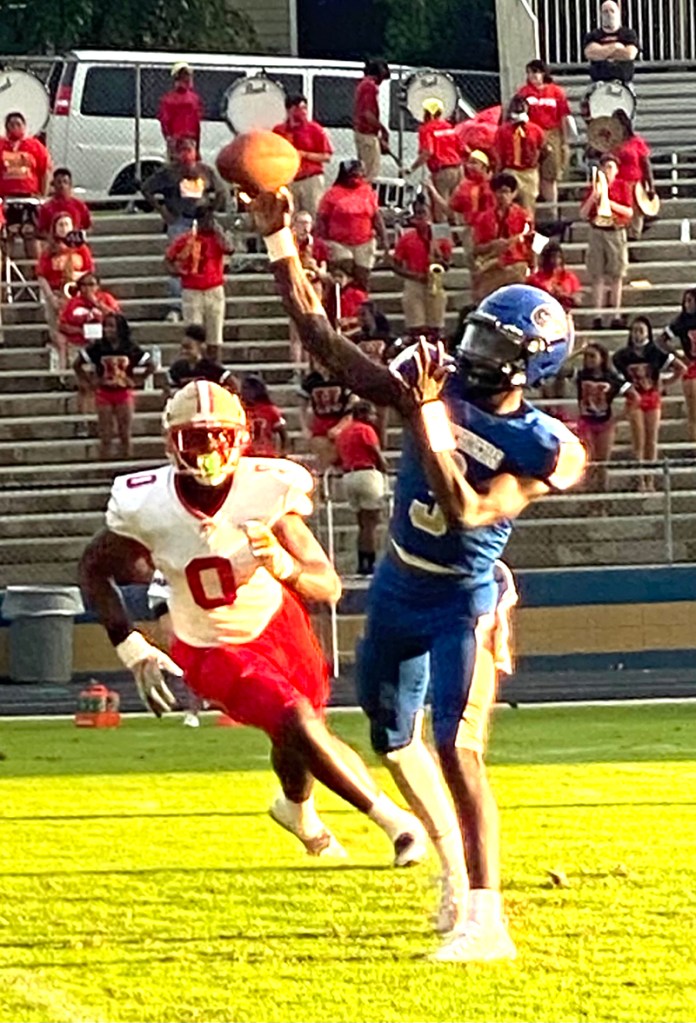 Sumter County Quarterback Cameron Evans is about to throw a pass. Photo by Ken Gustafson

AMERICUS – The Sumter County High School Panthers (SCHS) finally got to hit the football field for real on Friday night, August 27, when they hosted Hardaway (HHS) in their season opener at Alton Shell Stadium. The Panthers had to wait an extra week to play football, as they were forced to cancel their previously scheduled season opener against Westover due to an issue with COVID-19. Having had the beginning of its season disrupted, SCHS was more than determined to come out and fight for a win over the Hawks to open the season. However, it was not to be, as the Panthers were plagued by turnovers, bad snaps from center and mistakes on Special Teams in the first half. All of these things resulted in a 34-6 deficit at halftime and they eventually led to a 41-14 loss to HHS.

Though they gave maximum effort throughout the contest and tried to claw their way back into the game in the second half, the Panthers were not able to overcome those numerous mistakes in the first half that led to 34 points for HHS. 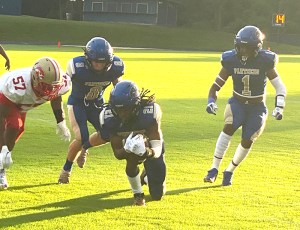 Sumter County’s Tre’veon Lamar recovers a squib kick for the Panthers on the opening kickoff against Hardaway.
Photo by Ken Gustafson

However, according to SCHS Head Coach Ross Couch, this game was the first live football event the team has played since April and the team has had very limited practice time in pads due to the forced quarantine as a result of a COVID-19 issue.

“I expected there to be some bumps and bruises, some mistakes. I didn’t expect it to land slide in the first half,” Couch said. “I thought our guys did a good job of making adjustments to themselves and taking the coaching adjustments. We came out in the second half and we were able to make some changes to what we were trying to do and have some success in everything we do. Like I told the guys, we can’t mess up everything. We can’t have breakdowns in everything and expect good things to happen. We’ve got to refocus. We’ve got to keep the kids focused and make sure that they’re doing things the right way and stay engaged all the time.” 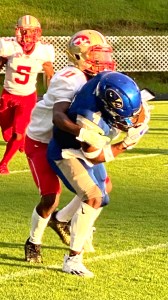 The Panthers won the toss and elected to defer till the second half. However, they decided to try a squib kick to try and prevent a long kickoff return. Jose Diaz’s squib kick was not executed properly, but it was a blessing in disguise as the kick ended up being like an onside kick, which was recovered by Tre’veon Lamar of the Panthers. It was a dream start to the game for SCHS.

After a couple of plays on offense, the Panthers had the ball down inside the HHS 20-yard line, but the drive bogged down. Then on fourth down, SCHS quarterback Cameron Evans tried to find a receiver in the end zone, but fortunately for SCHS, the Hawks were called for pass interference, which moved the ball down near the HHS six-yard line. This gave the Panthers a golden opportunity to get a touchdown early in the game, but on fourth and goal from the six, Evans’ pass was intercepted by Gerren Thibodeaux, who ran the ball 91 yards back the other way to the SCHS four-yard line. A couple of plays later, HHS running back De’ante Childs scored the first of his three rushing touchdowns on the night. The extra point was blocked, but the Hawks had an early 6-0 lead with 6:01 left in the first quarter. 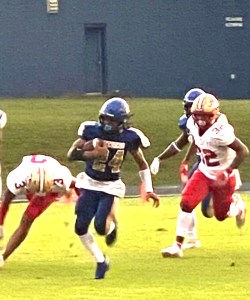 Sumter County’s Jarod Lewis makes a long kickoff return against Hardaway. Lewis scored a touchdown and a two-point conversion in the second half against the Hawks.
Photo by Ken Gustafson

The Panthers tried to mount a drive on their next possession, but struggled to move the ball. Part of this was due to some faulty snaps from center. This gave the Hawks another opportunity to increase their lead, which they did when Childs scored his second rushing touchdown with 31 seconds left in the first quarter. The extra point was good and the Panthers found themselves trailing 13-0.

Later on in the second quarter, a special teams mistake proved costly for SCHS. As the Panthers were getting ready to punt the ball away on fourth down, the ball was snapped over punter Traunta Robinson’s head. Robinson recovered the ball and tried to run for first down yardage, but was tackled well shy of the marker. This gave HHS great field position and another opportunity to add to its lead. On the ensuing drive, HHS quarterback D.J. Lucas through a 39-yard touchdown pass to Christian Curry. The extra point was good and the Hawks led 20-0. 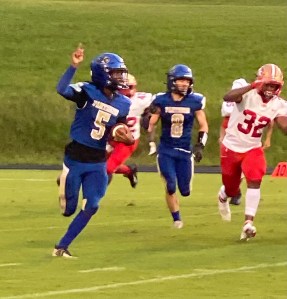 Sumter County punter Traunta Robinson runs with the ball after the ball was snapped over his head as he was trying to get off a punt.
Photo by Ken Gustafson

Then with 5:09 left before halftime, HHS struck again. On fourth down from the SCHS 25, Lucas found Curry again for a 25-yard touchdown pass. The extra point was good and the Hawks had a commanding 27-0 lead.

Fortunately for the Panthers, they were able to put some points on the board before halftime. SCHS was able to move the ball down to the HHS 15. Then with 24.8 seconds left, Evans scored on a quarterback keeper. The extra point was missed, but it looked as if the Panthers would go into the locker room with some momentum.

However, the Hawks were able to execute a kickoff return all the way down near the SCHS five-yard line, which proved to be a backbreaker for SCHS. A penalty against the Hawks moved the ball back close to the 25-yard line, but with seven seconds left, Lucas found Curry in the end zone for his third touchdown of the night. The extra point was good and the Panthers had to regroup at the half, trailing 34-6. 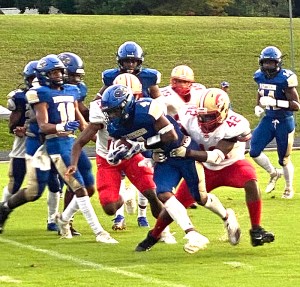 Anthony Tyson fights for yardage on a kickoff return for Sumter County.
Photo by Ken Gustafson

Late in the third quarter, the Panthers were able to get their offense going. They were able to move the ball down inside the HHS 10-yard line. Then with 2:09 to go, Jarod Lewis scored and converted a two-point conversion to get SCHS to within 20 at 34-14 with still a whole quarter to play.

However, the Hawks responded with 8:19 left in the fourth quarter, as Childs scored his third rushing touchdown of the game from five yards out.

In the closing minutes of the game, the Panthers continued to fight hard and the offense was able to move the ball into HHS territory, but on fourth and four from the Hawks’ 34, quarterback Kavon Lewis’s pass was intercepted. The Hawks were then able to run out the clock and left Americus with a 41-14 win.

The Panthers will try to rebound from this setback and earn their first win of the season when they host Worth County on Friday, September 3 at 7:30 p.m.