Raiders unable to solve McCard in loss at Tiftarea 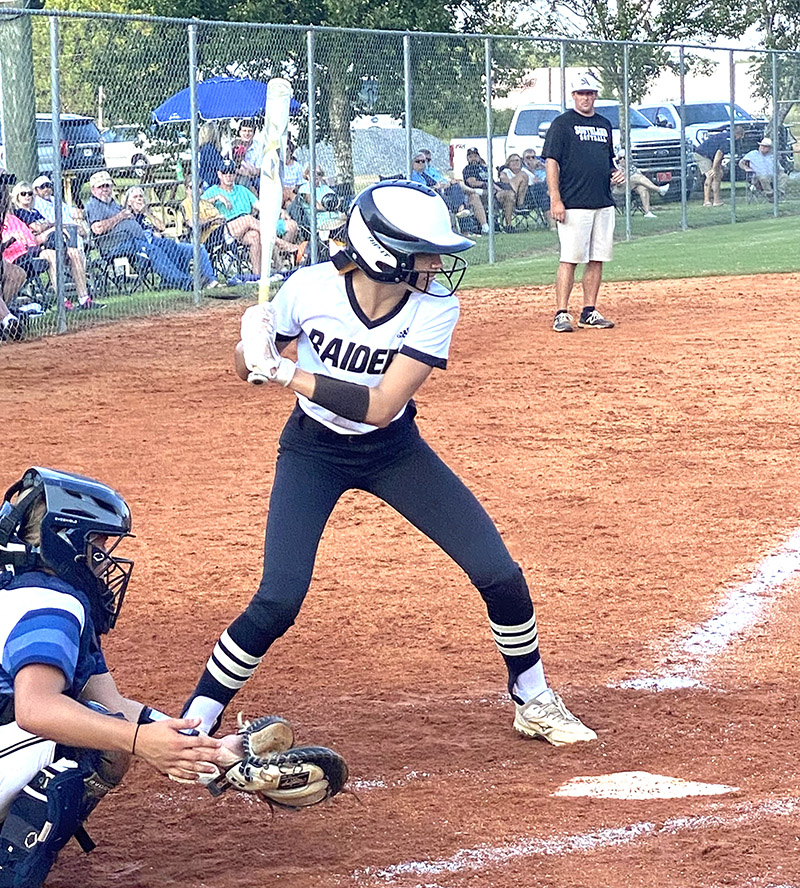 CHULA, GA – The Southland Academy Softball Team (SAR) made every conceivable effort to solve the speed and the skill of Tiftarea Academy Pitcher Pyper McCard. However, the Raiders could only muster three runs on two hits against the TA sophomore standout. In spite of McCard’s dominance in the circle, SAR was able to stay within striking distance of the Panthers for much of the game, but the bottom of the sixth inning proved to be the Raiders’ undoing, as the Panthers scored five runs on three hits, including a two-run homer by Ali Strength, to hand SAR a 10-3 loss in a GISA Region 3-AAA contest on Thursday, September 2 at Tiftarea Academy (TA).

In spite of the loss to the Panthers, SAR Head Coach Blaze Hargrove was extremely pleased with the effort that his squad gave in battling a quality opponent in TA.

“That (TA) is a really good team. I’m super, super proud of the way they (SAR) came out and competed today,” Hargrove said. “I thought that without that sixth inning, we did everything that I wanted us to do. We kept in the ballgame. We kept competing. We were getting after it. We were putting together good at bats. We were making the plays in the field. We let one inning get the best of us and they scored five in the sixth. Besides that inning, I was super, super proud of them and we are moving in the right direction as a team. They’re working hard for me and I couldn’t be more proud of them. As long as we keep improving, good things are going to happen with this team.”

Going into the bottom of the sixth, SAR only trailed 5-3, but a two-run triple by Elli Bryan and the two-run home run by Strength proved to be backbreaking plays that the Raiders could not overcome.

McCard was almost unhittable in the circle for TA, striking out 11 batters while giving up three runs on two hits and issuing two walks. SAR senior Morgan Minick and sophomore Landry Hart were the only two Raiders to earn hits off McCard. 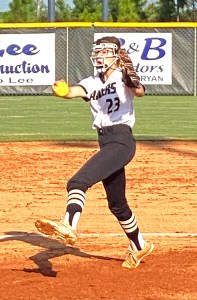 Chelci Woody got the start in the circle for the Raiders. In a little over six innings of work, she gave up six runs on eight hits, while four of those runs were earned. Ila Johnson came on in relief of Woody and gave up four earned runs on three hits, while walking three batters.

SAR took a 1-0 lead in the top of the first inning. Minick led off the inning with a double and Avery Ledger was able to draw a walk. Minick would later score on a wild pitch before T.J. Bowden flew out for the first out. However, SAR was not able to do any further damage, as McCard struck out Landry Hart and got Morgan Weaver to ground out to end the threat. 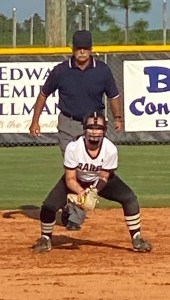 Southland Academy Junior Shortstop Morgan Weaver fields a ground ball at shortstop against Tiftarea Academy. Weaver reached on an error and scored a run against the Panthers.
Photo by Ken Gustafson

TA responded with two runs in the bottom of the first to take the lead. Isabel Fernandez led off with a single and Elli Bryan drove her in on an RBI double to left field. Later on in the inning with two outs, Madi Hartsfield gave the Panthers a 2-1 lead with an RBI single.

Then in the bottom of the third, the Panthers added three more runs on four hits, including an RBI double by McCard and an RBI single by Hartsfield. Laura Ann Jones would later add to the TA lead when she drove in a run on a sacrifice fly to centerfield.

In the top of the fourth, the Raiders were able to strike back. They took advantage of two TA errors and with one out, Samantha Wojnar drove in Weaver on a sacrifice fly.

The Raiders were able to hold the Panthers scoreless over the next two innings before scoring a run in the top of the sixth. Landry Hart led off the frame with a single and later advanced to second on a passed ball. After Weaver struck out looking, Hart was able to advance to third on another passed ball and then scored when Maddie Godwin hit into a fielder’s choice. Wojnar then reached on an error and the tying run came to the plate in the form of Eva Grace Studdard. However, McCard struck out Studdard to end the Raiders’ threat and that set the stage for the Panthers’ five-run explosion in the bottom of the sixth. 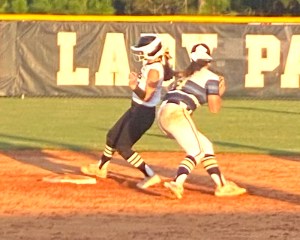 Southland Academy Senior Second Baseman Samantha Wojnar steals second base in the bottom of the sixth against Tiftarea Academy.
Photo by Ken Gustafson

In the top of the seventh, the Raiders made one last effort to get back in the game, but it was not to be. McCard struck out Gracie Wilson, got Minick to ground out to second and struck out Kayla Hudgins to end the game.

With the loss, SAR drops to 4-5 on the season and 1-2 in the Region 3-AAA standings, while the Panthers improve to 5-1 and are undefeated at 3-0 in Region 3-AAA competition.

The Raiders will try to get themselves back into the win column when they host Crisp Academy on Tuesday, September 7 at 4 p.m.