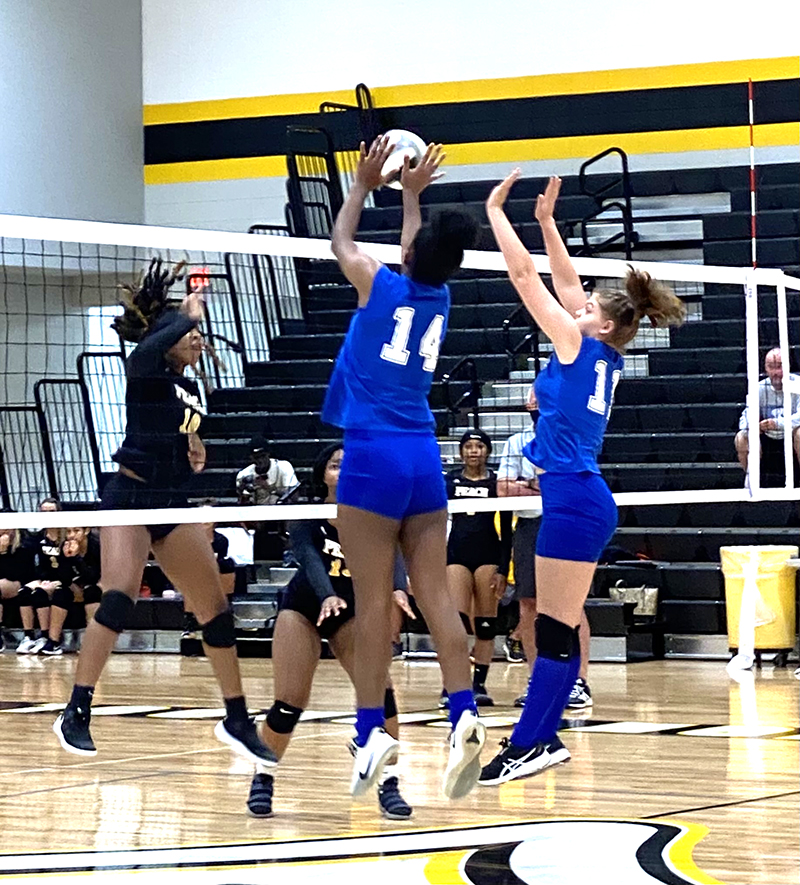 In these matches, the Lady Panthers simply struggled with receiving errors, ball control and giving up service aces.

According to SCHS Head Coach Alonzo Lockett, the lack of movement on the court by the Lady Panthers also played a factor in the results of the tri match.

“That’s something we need to work on,” Lockett said. “Like I said yesterday, we’ve got a young group. We’re going to try to get it together as much as we can.” Lockett went on to say that he is hopeful that the mistakes that the Lady Panthers have been making can be corrected before the play-in match to get into the region tournament.

In a tri match involving three teams, the matches are a best-of-three affair, meaning that the first team to win two sets wins the match.

In their first match against the Lady Trojans, SCHS found themselves trailing 13-7 in the first set. The Lady Panthers struggled to control the ball with their digs and were unable to generate a consistent offense. As a result, they went on to lose the first set to PCHS 25-12. In the second set, the Lady Panthers were able to get off to a good start by taking an early 3-1 lead. One of those points was the result of a service ace by Curtissa Evans. Over the next few rallies, the Lady Panthers were playing much better and they took a 9-5 lead before PCHS called a timeout. 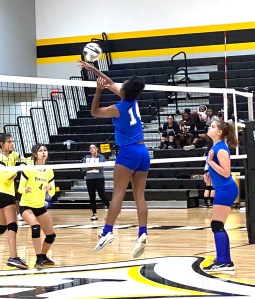 However, out of that timeout, the Lady Trojans went on a 7-1 run to take a 12-10 lead. That proved to be the turning point of the second set and the match, as the Lady Trojans increased their lead to 16-11 before committing a net violation that gave the Lady Panthers a point.

PCHS continued to maintain the lead and went up 21-14 before committing a service error that gave SCHS a point, but the Lady Panthers were not able to mount a comeback and went on to lose the second set 25-17 and the match 2-0.

After a lengthy warm up period, the Lady Panthers took the floor again for their second match of the tri match against Chattahoochee County. Once again, the Lady Panthers got off to a good start when Ty Harvey scored the first point of the match on a service ace. However, Chattco scored four straight points to take a three-point lead, but the SCHS Lady Panthers roared back and outscored Chattco 11-3 to take a 12-7 lead.

However, the Lady Panthers of Chattco responded by scoring three straight points before SCHS Middle Hitter Georgia Wooden was able to dig the ball off a serve back over the net for a point, making the score 13-10 in favor of SCHS. It seemed as if the SCHS Lady Panthers were going to have the upper hand in this first set. Over the next several rallies, SCHS was able to maintain a 16-12 lead and would later lead 19-16 after another service error by Chattco.

Unfortunately for the SCHS Lady Panthers, at this point, the momentum swung in the other direction. SCHS struggled to control the ball on the incoming serves from Chattco. This allowed the Chattco Lady Panthers to score four straight points and take a 20-19 lead. After the next couple of rallies, the score was tied at 22-22, but Chattco finished off SCHS by scoring three straight points on service aces and won the first set 25-22.

In the second set against Chattco, the SCHS Lady Panthers fell behind early 4-1, but went on a 4-1 run, which was capped off by a service ace from Evans to tie the set at 5-5.

Chattco, however, went on a 9-3 run over the next several rallies before Georgia Wooden was able to earn a point for the Lady Panthers.

SCHS was able to outscore Chattco 6-2 over the next few rallies to get to within two points at 17-15. However, that would be as close as the Lady Panthers would get.

Over the next several rallies, Chattco took control of the set and the match. The Lady Panthers continued to struggle with handling the ball and scoring points. As a result, the Chattco Lady Panthers went on an 8-2 run to close out the second set 25-17 and win the match 2-0.

SCHS will try to put a halt to their three-game losing streak when they head to Cuthbert, GA on Tuesday, September 7 to take on Randolph-Clay. First serve is scheduled for 5 p.m.