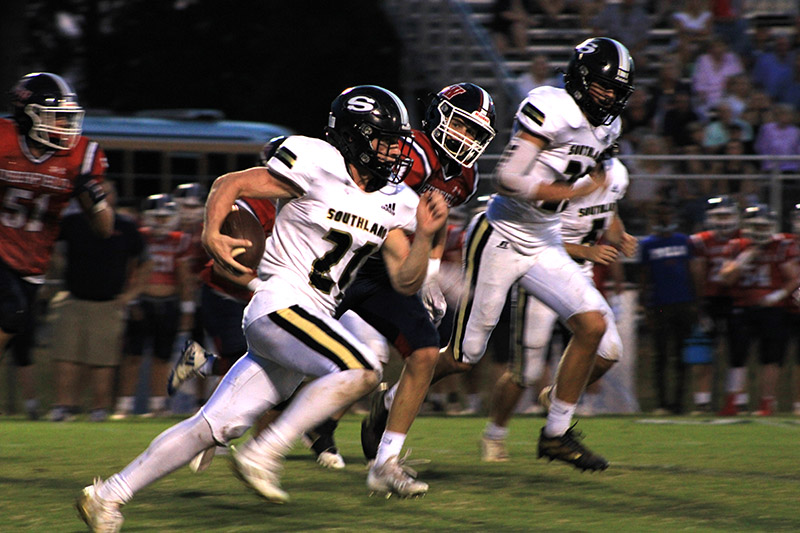 ALBANY – Southland Academy (SAR) senior DB/RB Hudson Collins had the game of his life in the Raiders’ 16-14 win at Deerfield-Windsor (DWS). Collins tallied three interceptions, including two crucial ones late in the fourth quarter. The first of those two interceptions led to a game-winning field goal by SAR’s Caleb Law with 1:25 to go in the game and the second one came in the waning seconds of the contest and ended up securing the hard-fought victory for the Raiders over their long time archrivals on Friday, September 3 at Webb Memorial Stadium in Albany.

SAR senior running back David Dickens also had a tremendous game for the Raiders.  Dickens scored both of SAR’s touchdowns on a 50-yard and a 70-yard run from scrimmage that gave the Raiders a 13-0 lead, which they held until the latter part of the third quarter.

While Collins and Dickens both stood out in this contest, SAR Head Coach Rod Murray credits the hard work of the entire Raider team and its ability to overcome adversity, and some of that adversity was self-inflicted.

“Our kids played very hard.  We were up, and we were down, but our kids chose to keep playing and believing in each other,” Murray said.   “They believed that we could find a way, and they did!  It was a great team effort and it certainly gives us some momentum heading into this week.” 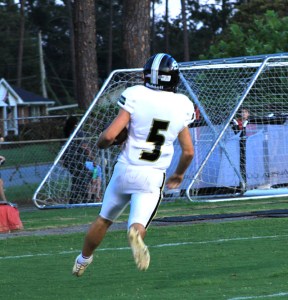 Southland Academy senior running back David Dickens scores one of his two rushing touchdowns in the Raiders’ win over the Knights.
Photo by Kayla Hudgins

In the first quarter, the Raiders got on the board when Dickens scored the first of his two touchdowns on a 50-yard run. The extra point was missed, but SAR had an early 6-0 lead. Then later in the second quarter, Dickens exploded for a 70-yard run for a touchdown. This time, the extra point attempt by Caleb Law was good and the Raiders went into halftime leading 13-0.

Unfortunately for the Raiders, the momentum swung in favor of the Knights in the third quarter when an SAR player was ejected from the contest for unsportsmanlike conduct. SAR was also assessed a 15-yard penalty on the play and it would eventually lead to the Knights’ first touchdown of the game. 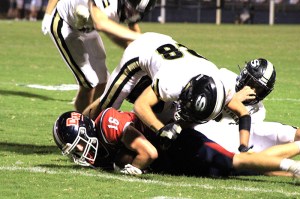 Then in the fourth quarter, DWS scored the second of its two touchdowns with a little over three minutes to go. The extra point was good and the Raiders found themselves trailing 14-13 after leading by two scores for most of the game.

Then in the closing minutes of the game, the Knights had the ball and were trying to march towards the end zone to ice the game with another touchdown, but Collins was able to intercept DWS quarterback Thomas Ray’s pass and ran the ball all the way down inside the DWS 20-yard line. 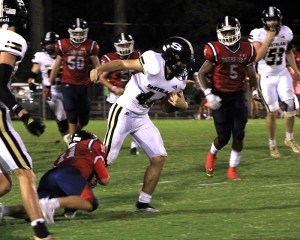 The Raiders were able to run the ball down near the 5-yard line and had a chance to score a touchdown, but a personal foul penalty against SAR pushed the ball back to the 16. Eventually, SAR was forced to attempt a 28-yard field goal, which Caleb Law converted with 1:25 to go. That was still plenty of time for the Knights to mount a drive for a game-winning field goal of their own. However, Collins continued his heroics by intercepting another pass, which sealed the win for SAR.

Dickens led the Raiders in rushing with 159 yards on nine carries and scored two touchdowns, while Collins rushed for 88 yards on 15 carries. In total, the SAR ground game produced 259 yards of offense on 41 caries with two touchdowns.

The Raiders (1-1) will try to continue their winning ways when they make the trek east to Bellville, GA on Friday, September 10 to take on Pinewood Christian.  Kickoff for this game is scheduled for 7:30 p.m.