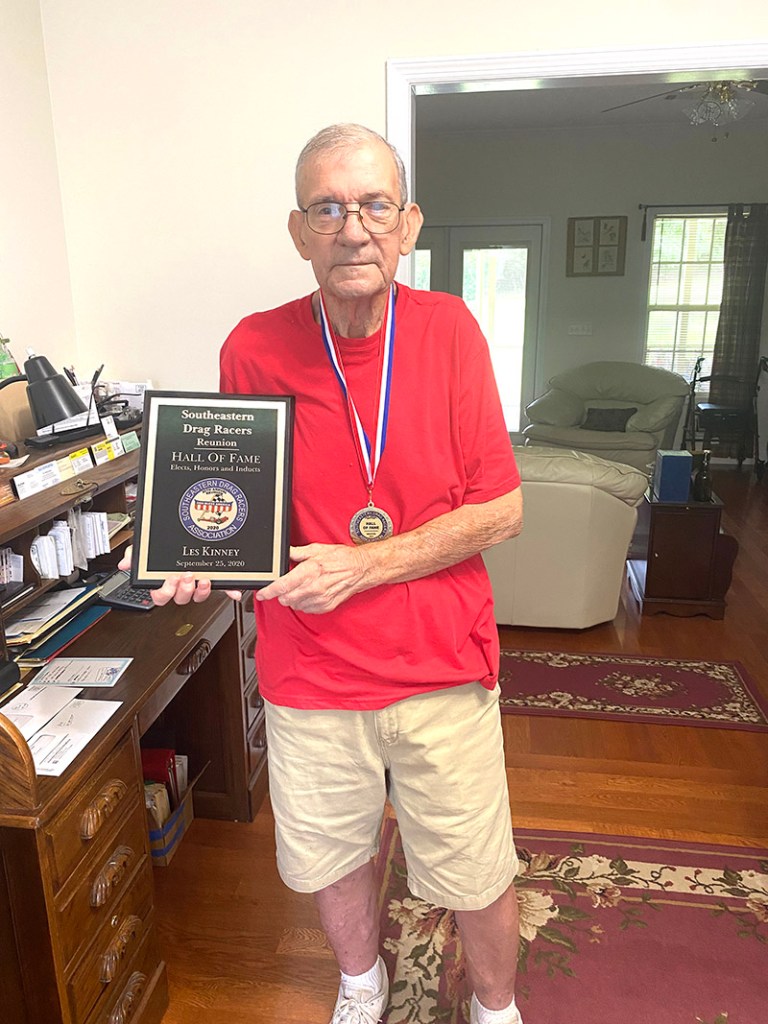 Les Kinney poses for a photo of his plaque signifying his induction into the Southeastern Drag Racers Association (SDRA) Hall of Fame. The official induction ceremony took place a year ago in September in Dothan, AL. Photo by Ken Gustafson

AMERICUS – As a young boy growing up in Troy, Alabama, Les Kinney loved being around cars and was captivated by the thrill and exhilaration of flying down the drag way. His passion led to an extremely successful career as a drag racer and has ultimately led to his induction into the Southeastern Drag Racers Association (SDRA) Hall of Fame.

The induction ceremony took place back in late September of 2020 in Dothan, AL, almost exactly a year ago from now. On Thursday, August 19, the Americus Times-Recorder sat down with Kinney and his wife Martha to talk about his 40 years of racing as a drag racer and how he was able to work his way to achieving this prestigious honor.

According to Kinney, 83, there was no definite point in his life at which he decided to be a drag racer. He simply has had a love for automobiles all of his life. “I really didn’t do any racing or anything until she (Martha) and I had already gotten married,” Kinney said. “I guess the first car that I actually did racing with was our regular passenger car.” Kinney went on to say that he competed in a National Hot Rod Association (NHRA) drag racing competition at Smokey Hill Air Force Base in Salina, KS. “I was excited about it so I went out and registered and they let me run,” Kinney said. “Of course, we didn’t do any good. We had a good time and I think I got eliminated in the second round.” 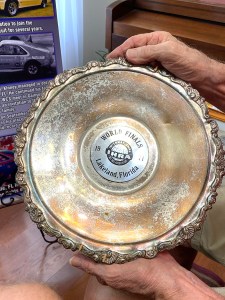 This is the plaque signifying Kinney’s 1971 championship at the International Hot Rod Association (IHRA) World Finals in Lakeland, FL.
Photo by Ken Gustafson

After that one competition in Kansas, Kinney said that he didn’t do any racing at all for a number of years, but when he got out of the service, he met up with a friend of his from Americus named Harry Adams. Lo and behold, this meeting between Kinney and Adams would evolve into a successful comraderie and partnership that would last for about 10 years.

“He liked racing and I did too,” Kinney said. He recalls that one of the cars that he and Adams used while racing back in 1962 was a factory-bought 409/409 Chevrolet that had a 409-horsepower engine and two full-barrel carburetors. Before that, Kinney raced with a 55 Chevrolet that eventually gave out. “That was about it for that car. We ran it for years,” Kinney said. “But then when I got with Harry, that’s when I met Harry and he had the 409 Chevrolet that he bought. That was in 1962.

We started racing that car and did really well with it and we pulled the car with a tow bar. We didn’t even have a trailer back then.”

He went on to say that his sponsor back then was a gentleman by the name of Ray Fushae, who owned and operated Fushae Trucking; an Albany-based trucking company that specialized in hauling livestock. According to Kinney, there were pictures of hogs, cows, sheep and goats plastered all over the 55 Chevrolet and it was a car that he raced for years at the drag strip in Albany before he teamed up with Adams. 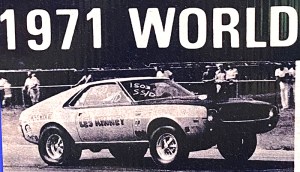 This is a photograph of the 1969 AMX car that Kinney used to win many of his competitions, including the 1971 World Finals and the 1972 Gator Nationals in Gainesville, FL.
Submitted Photo

While he liked racing the 409/409 and 55 Chevrolet vehicles with Adams, Kinney also had a 1965 GTO that he liked to race for fun on Sunday afternoons at the Albany Drag Way. To this day, Kinney still has that 1965 GTO in his garage and he has kept it in brand new condition all of these years. During his time with Adams, Kinney also used that 1965 GTO to tow the 1962 409/409 Chevrolet to drag racing events. 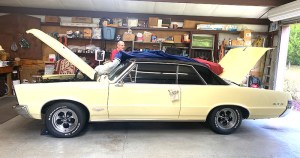 This is Les Kinney’s 1965 Pontiac GTO: one of the cars that he used in some of his drag racing competitions. He still has it today in his garage and it is in brand new condition.
Photo by Ken Gustafson

During this time, Kinney was racing with a team called the Dixie Pro Stockers and Mike Moore was right there with him. “Mike was always there. In other words, wherever we went, we went together,” Kinney said. “Mike was the mechanic and I drove. Mike could drive too and probably as good as I could, but he didn’t like to drive.”

During a time period that went from approximately 1969 to 1975, Kinney raced everywhere from Suffolk, VA to Columbus, OH to Gainesville, FL, winning numerous drag racing awards and national competitions along the way. He also set numerous records at NHRA, IHRA and AHRA events and set a new national record at the Southeast Division WCS Meet in Gainesville, FL before winning the championship at the IHRA World Finals in Lakeland, FL in 1971. 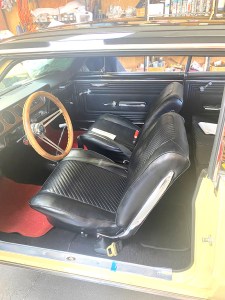 This is the inside of Les Kinney’s 1965 Pontiac GTO. As one can see, it has been kept in a “brand new” condition.
Photo by Ken Gustafson

Kinney was supposed to compete in the 1972 NHRA Southeast Division WCS Meet in September of that year, but could not compete due to illness. Mike Moore drove in his place and set a new national record of 10.70, breaking the old record of 10.79.

Throughout this six-year span, Kinney drove his 1969 AMX car to victory in all of those events. 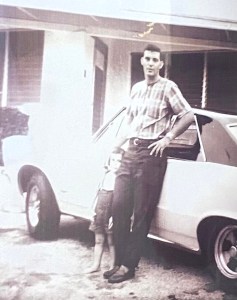 Les Kinney stands next to his race car with his three-year-old son Kevin (left).
Submitted Photo

Kinney passed his passion for drag racing on to his three sons and one daughter: Buck, Kevin, Keith and their sister Beth. Buck Kinney, who now serves as the Senior Pastor of Plains Baptist Church in Plains, GA, raced for eight years through the 80s and the early 90s. He credits his father for giving him and his siblings the passion for drag racing while growing up.

“My Dad was the heart and soul of my racing career, but I raced dirt bikes (Motocross) instead of cars,” Buck Kinney said. “He was my mechanic and mentored/coached me in racing. My Dad helped me start out racing at small local tracks and build up over the years to win points championships and finish in the top ten at amateur nationals as a Kawasaki factory support rider with major sponsors for every product required to race at a high level (riding gear, tires, sprokets/chains, engine/suspension components and modifications, etc.). We had a lot of success together, but if I would’ve listened to him more, and not been such a typically stubborn young guy, we probably would’ve been really successful. Kevin raced motocross as well for a few years. Both of my brothers (Keith and Kevin) raced recreationally in various arenas, and my sister Beth, who might be the most naturally gifted driver in the family next to my Dad, has raced some as well,” Buck Kinney continued. 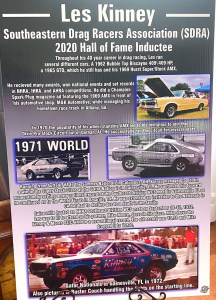 This is a picture listing all of Kinney’s awards that he has won over the years, as well as pictures of the cars he raced with and his induction into the SDRA Hall of Fame.
Photo by Ken Gustafson

Once his competitive racing days were over, Les Kinney went into the restaurant business and owned his own restaurant in Albany called Kinney’s. After selling the restaurant in 1979, Kinney worked as a car salesman for various motor companies and was a trucker for Southeastern Freight Lines until he retired in 2006 at age 68. 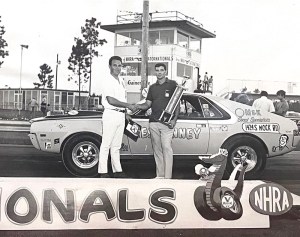 This is a picture taken of Les Kinney with his trophy (right) and his racing partner Mike Moore (left) after winning the National Hot Rod Association (NHRA) Nationals.
Submitted Photo

Kinney and his wife Martha still live in Americus. They have four children: Keith Kinney (Tammy), Beth Davis (Terry), Kevin Kinney (Sally) and Buck Kinney (Beth). They also have 11 grandchildren and 13 great grandchildren. Kinney is one of the many people who call Americus and Sumter County home who have gone on to become champions in their sport and have made both Americus and Sumter County proud.