Barineau firmly in command in leading Lady Wildcats to victory 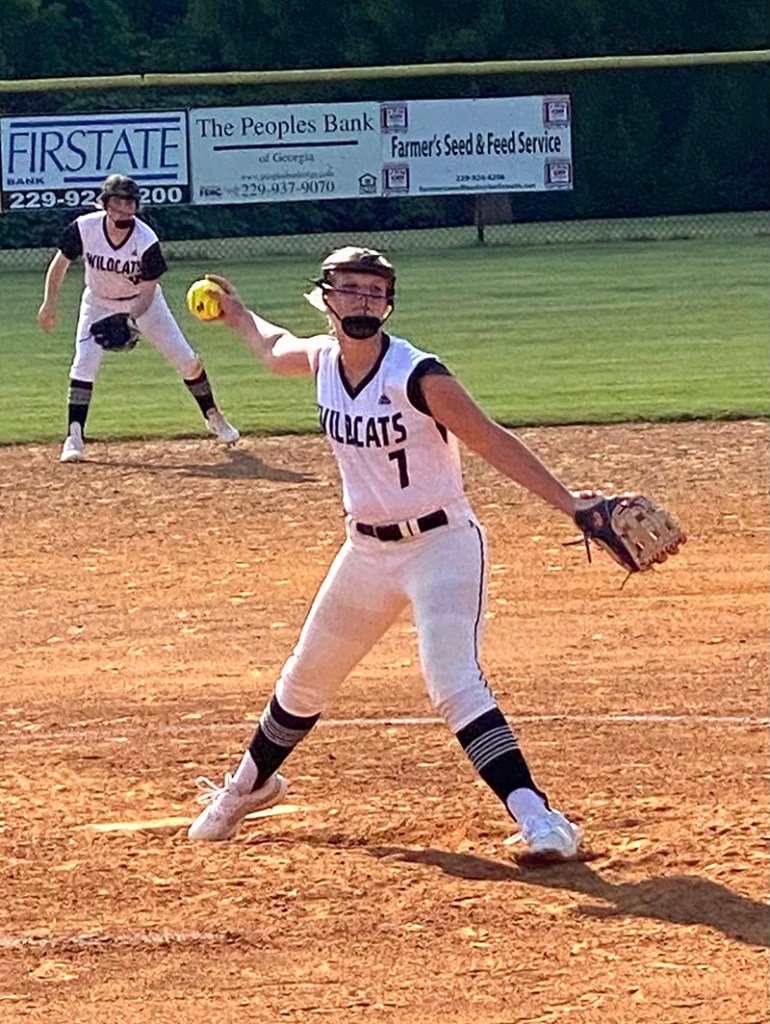 Sumter County sophomore pitcher Lizzie Barineau gave up only two runs on four hits and struck out five batters to help lead the Lady Wildcats to a 7-2 victory over Taylor County. ATR Archive

ELLAVILLE – After their heartbreaking loss at Crawford County the day before, the Schley County Varsity Girls Softball Team (SCHS) rebounded nicely as SCHS starting pitcher Lizzie Barineau gave up only two runs on four hits and struck out five batters to help lead the Lady Wildcats to a 7-2 victory over Taylor County on Thursday, September 9 at Wildcat Park.

Barineau also contributed at the plate as well. She went 1 for 2 with a single, an RBI and scored a run.

The Lady Wildcats found themselves trailing 2-1 going into the fourth inning, but erupted for four runs on four hits in the bottom of the fourth to take a 5-2 lead. With one out in the fourth, Landry Whaley belted a triple to centerfield and would later score on a wild pitch to tie the game at 2-2. Later on in the frame with two outs, Maddie Walker, who reached on a single, eventually scored on an error and Brenna Jacobs followed that up with an RBI single to left field, giving the Lady Wildcats a 4-2 lead. Emma Walker capped off the frame with an RBI single to left field and SCHS had a 5-2 lead with three more innings to play.

From that point on, Barineau was in complete command in the circle. She pitched three scoreless innings the rest of the way and only allowed one hit. The SCHS offense, on the other hand, was able to add two more runs. In the bottom of the fifth, Whaley drove in Berkley Goodin on a sacrifice fly and Makena Wurtz would later score on an error in the bottom of the sixth.

In the top of the seventh inning, Barineau walked Hannah Harris to lead things off, but retired the next three batters in order to seal the 7-2 win for SCHS.

The Lady Wildcats (5-5) will try to stay in the win column when they travel over to Rochelle, GA to take on Wilcox County on Monday, September 13. First pitch is scheduled for 5:30 p.m.