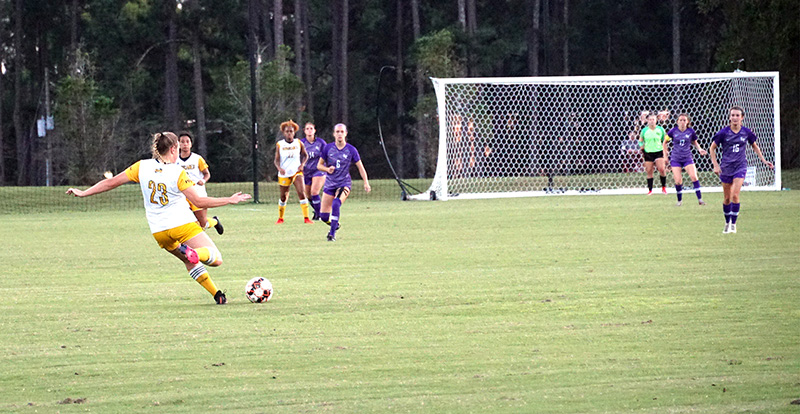 GSW freshman defender Emily Davis (#23) is about to take a shot on goal against Spring Hill College. Photo by Christopher Finn

AMERICUS – The Georgia Southwestern State University Women’s Soccer Team (GSW) is off to its best start in school history at 3-0 under first-year head coach Kerry Edwards. The Lady Hurricanes battled all night in a tough and competitive environment against a hard-nose Spring Hill College side, but GSW was able to come away with a 2-1 victory over SHC on Thursday, September 9 at Hurricane Field.

During the second half, it was an intense back and forth affair between the two sides, but neither could add to the scoreboard until GSW senior defender Laura Duran Blanco passed the ball to an open Lauren Ford, who put it into the back of the net, giving the Hurricanes a 2-0 lead with just 10 minutes left in the match.

SHC would not quit, however. Three minutes later, Carson Reeves sent a ball past O’Shaughnessy on a free kick, making the score 2-1 in favor of GSW with just seven minutes left and signaling the end of the Lady Hurricanes’ shutout streak that lasted 263 minutes of game-time. However, the Lady Hurricanes were able to close the game out for the 2-1 victory.

The Lady Hurricanes will try to stay unbeaten when they travel up to Rome, GA to take on the Lady Hawks of Shorter University on Saturday, September 11. Kickoff is scheduled for 2 p.m.