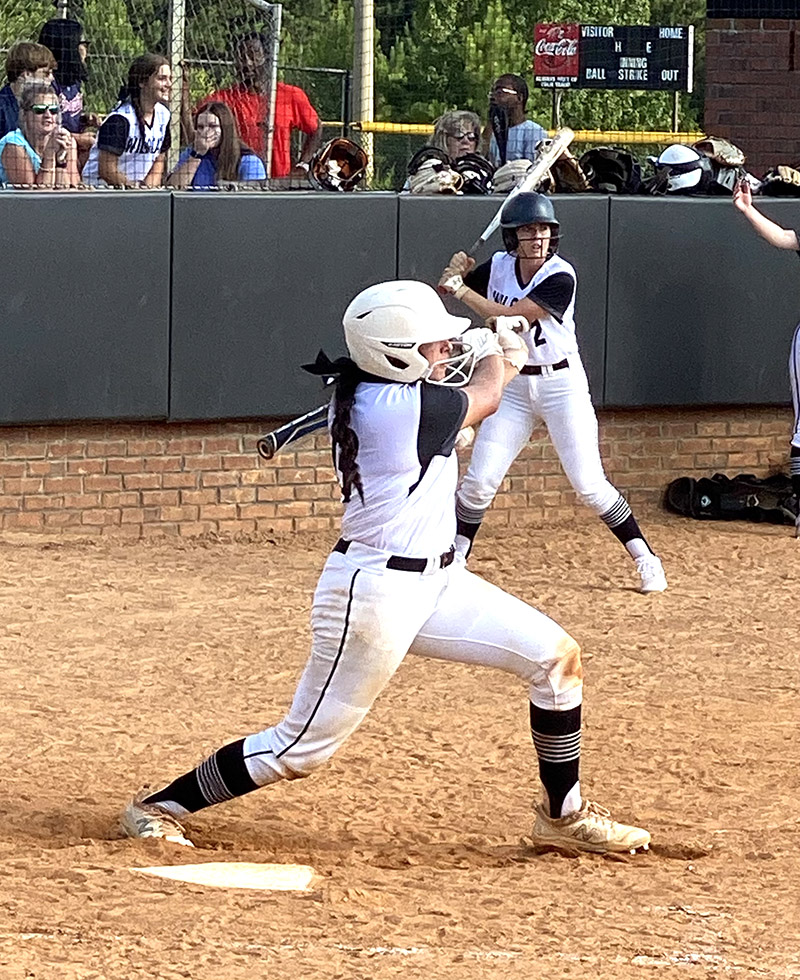 Schley County catcher Zoe Molina went 2 for 4 at the plate with two singles and drove in a run in the Lady Wildcats’ 7-3 loss to Marion County. ATR Archive

ELLAVILLE – With the exception of scoring two runs in the sixth and one in the seventh, the Schley County Lady Wildcats went scoreless against their Region 5A-Public opponents Marion County (MC) in spite of tallying nine hits in the contest. As a result, SCHS fell to the Lady Eagles 7-3 on Tuesday, September 14 at Wildcat Park on the SCHS campus.

Makena Wurtz and Zoe Molina each went 2 for 4 at the plate and Molina drove in an RBI to lead the SCHS offense. Maddie Walker also had a productive day at the plate, as she went 1 for 3 with two RBIs.

Lizzie Barineau got the start in the circle for the Lady Wildcats and pitched the entire game. She gave up seven runs on 10 hits, walked two batters and struck out one.

This was a game in which SCHS was able to put runners on base with nine hits, which was one less than the Lady Eagles’ total of 10 hits. However, with the exception of the sixth and seventh innings, the Lady Wildcats could not get the timely hitting they needed and stranded several base runners.

The Lady Eagles jumped out to a 2-0 lead in the top of the first inning. Tori Green led off the inning with a double and Brea Miller drew a walk to put runners on first and second with nobody out. J.K. Shivers was called out for batter interference, but Green was able to score on a fielders’ choice by Emily Dickerson. Savannah Taylor then reached on an error that allowed Miller to score, giving MC a 2-0 lead.

The Lady Eagles added two more runs in the top of the third when Miller drove in a run on an RBI triple and then stole home plate to give the Lady Eagles a 4-0 lead.

In the bottom of the third inning with one out, the Lady Wildcats were able to get a runner aboard when Emma Walker singled to centerfield. Then Wurtz singled on a line drive to right field, but Walker was thrown out at third. Zoe Molina then grounded out to the pitcher for the third out and the Lady Wildcats’ opportunity to score runs in the inning went by the boards.

The Lady Eagles added another run in the top of the fifth. With runners at first and third and one out, Dickerson drove in Miller on a sacrifice fly to give MC a 5-0 lead.

In the bottom of the sixth, the Lady Wildcats got on the scoreboard with two runs on four hits. Maddie Walker was able to drive in both runs on an RBI single to left field, cutting the SCHS deficit to 5-2 with one more inning to play.

However, that would be as close as the Lady Wildcats would get. In the top of the seventh, the Lady Eagles scored two insurance runs on four hits. SCHS tried to strike back in the bottom of the seventh and scored a run when Molina drove in Brenna Jacobs from third on a fielder’s choice. However, Dickerson, who was pitching for MC, got Berkley Goodin to ground out into a fielder’s choice to end the game.

Miller led the Lady Eagles’ offense by going 3 for 3 at the plate with two triples, an RBI and four runs scored. Dickerson went the entire way in the circle for MC. She gave up three runs on nine hits, walked one batter and struck out two.

The Lady Wildcats are now 5-7 overall and 2-1 in Region 5A-Public competition.

The Lady Wildcats will try to end their two-game losing streak when they host Manchester (3-5, 0-4) in another region contest on Thursday, September 16 at 5 p.m.