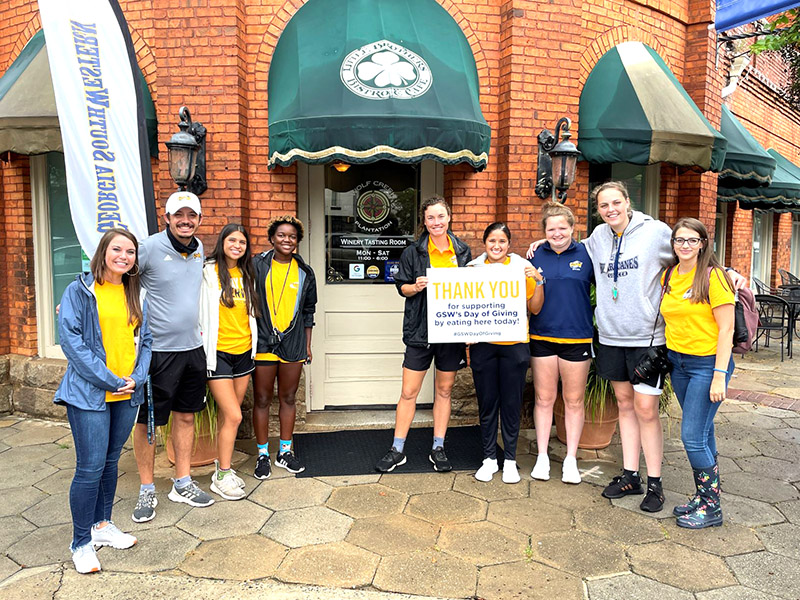 AMERICUS – Georgia Southwestern State University’s (GSW) third annual Day of Giving, which ran midnight to midnight on Thursday, September 16, doubled the initial goal of $50,000, netting a total of $99,925.50 for the University surpassing last year’s amount by over 188%.

This year, the Hurricanes included an additional challenge during the 24-hour timeframe attempting to gain donors from all fifty U.S. states asking contributors to “turn the map gold.” The GSW community watched in anticipation throughout the day as each state turned gold when a gift was received. Alumni and friends from a whopping 44 states made gifts – an increase from only seven states the previous year.

“Thanks to the hard work of our committee, donors, community partners and volunteers, we exceeded our fundraising goal by 99.9 percent,” stated Stephen Snyder, executive director of the GSW Foundation and assistant vice president for Advancement. “In just three years, our Day of Giving totals jumped from $19,000 to nearly $100,000 and gifts from 6 states to 44 states. I consider this a huge success, and it makes me so proud to be a Hurricane.”

A total of 243 gifts rolled in from 44 states and three countries – Canada, Brazil and Belgium. Out of the 223 donors, 76 were first-time donors. This effort was made possible by contacting potential donors in advance, sharing promotions in the weeks leading up to the event, and tagging friends and family on social media on the Day of Giving.

Contributions were designated for scholarships, general support, athletics, facility improvements and many other areas.

“The GSW Advancement Team had high expectations for this 24-hour event focused on philanthropy and community,” said GSW President Neal Weaver, PhD. “Thanks to the energy, support and generosity from the Hurricane family across the nation and around the globe, we stormed past our initial financial goal! I love seeing the ‘gold force’ come together every year to make a difference in the lives of students and the future of Georgia Southwestern.”

As another statement of support, Americus Mayor Barry Blount signed a proclamation on September 2 announcing Thursday, September 16, 2021 as the third annual Day of Giving, recognizing GSW as a vital asset to the community and economic growth. Visit www.gsw.edu/dayofgiving for more information.