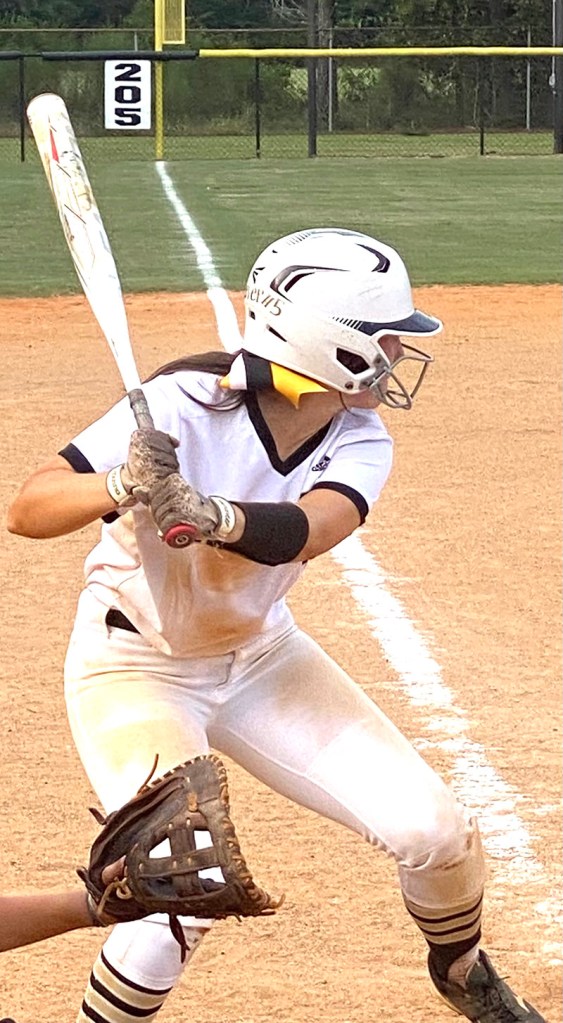 Southland Academy shortstop Morgan Weaver went 3 for 5 at the plate and belted a grand slam home run in the top of the seventh inning to help lead the Lady Raiders to a 14-12 victory over Terrell Academy. ATR Archive

DAWSON, GA – The Southland Academy Lady Raider Softball Team (SAR) trailed Terrell Academy 7-1 after the first three innings, but the Lady Raiders showed what they are made of.  They scored one run in the fourth and exploded for six runs in the fifth inning. This offensive explosion would eventually lead to a 14-12 come-from-behind victory for SAR over the Lady Eagles on Thursday, September 23 at Terrell Academy.

The big blow by SAR in the fifth came on a three-run home run by T.J. Bowden, which gave the Lady Raiders an 8-7 lead.  From there on out, SAR would not relinquish its lead.

The Lady Raiders (8-7, 2-3 in region) added another run in the sixth inning when Morgan Weaver scored on a wild pitch. Then in the seventh, the SAR offense erupted again for five more runs. Four of them came off the bat of Weaver, who belted a grand slam home run over the left field wall.

However, the Lady Eagles (2-9) staged their own comeback in the bottom of the seventh by scoring five runs on two hits and taking advantage of three SAR errors. Fortunately for the Lady Raiders, SAR pitcher Maddie Godwin was able to get TA catcher Bailey Harvey to fly out to right field to end the game.

Weaver led SAR’s attack by going 3 for 5 at the plate with the three-run homer in the fifth and drove in a total of six RBIs on the day.  Samantha Wojnar also had a strong performance at the plate against the Lady Eagles. Wojnar went 3 for 4 and scored three runs.  In total, the Lady Raiders scored 14 runs on 15 hits and committed four errors, while TA scored 12 runs on 10 hits and also committed four errors.

Chelci Woody got the start in the circle for the Lady Raiders. In two innings of work, Woody gave up six earned runs on four hits, walked two batters and struck out two.

Maddie Godwin came on in relief of Woody and pitched the remaining five innings. She gave up six runs on six hits, but only one of those runs was earned.  She walked four batters and struck out four.

However, SAR began its comeback in the very next inning.  The Lady Raiders got a lead off triple by Landry Hart in the top of the fourth.  Hart would subsequently score when Bowden hit into a fielder’s choice, cutting the deficit to 7-2.

Then in the top of the fifth, it all started four the Lady Raiders when Jadie Burrell reached on a dropped third strike. This was followed by a single from Wojnar and a two-run RBI single by Morgan Minick, bringing the Lady Raiders to within three at 7-4. Weaver followed that up with an RBI single and just like that, SAR was within two runs at 7-5.  Avery Ledger then singled to centerfield and the Lady Raiders had
runners at first and second with still nobody out.

After Landry Hart grounded into a fielder’s choice for the first out, Bowden drilled a three-run home run over the centerfield wall to give the Lady Raiders an 8-7 lead.  In the bottom of the fifth, the Lady Eagles were able to load the bases with one out, but Godwin got DeBary to ground into a double play to end the threat.

Minick and Weaver had back-to-back singles to start off the top of the sixth for SAR. That would eventually lead to the Lady Raiders scoring another run on a wild pitch and taking a 9-7 lead.

SAR would add five more runs in the seventh with Weaver’s grand slam and Hart’s RBI double, but the Lady Eagles did not go quietly in the bottom of the seventh.  They scored five runs on two hits and were aided by three SAR errors.  DeBary, who belted a three-run homer in the first, doubled in another run in the seventh to bring the Lady Eagles to within two runs at 14-12.  Fortunately for the Lady Raiders, Godwin was able to get Bailey Harvey to fly out to end the game.

DeBary was clearly the offensive leader for TA.  She went 4 for 5 with two doubles, a three-run home run and drove in a total of five RBIs while scoring two runs of her own. DeBary also pitched the entire game for the Lady Eagles. She gave up 14 runs on 15 hits, walked one and struck out three.

The Lady Raiders have now won two straight games and will try to extend their winning streak to three when they face these same Lady Eagles in a rematch on Monday, September 27 at Southland Academy. First pitch is scheduled for 4 p.m.