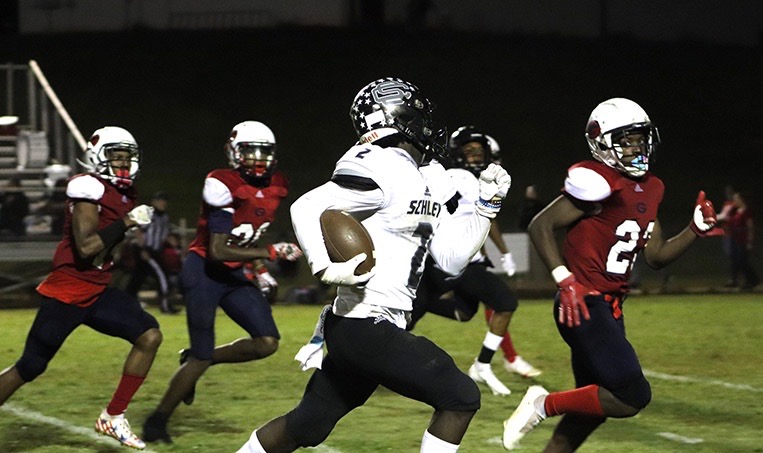 GREENVILLE, GA – The Schley County Wildcats (SCHS) excelled on both sides of the ball and on Special Teams against Greenville and that excellence led to a 57-26 GHSA Region 5A-Public victory for SCHS over the Patriots on Friday, September 24 at Greenville High School (GHS).

With the win, SCHS is now 5-0 overall on the season and 3-0 in Region 5A-Public competition.

“I felt like we played well. Greenville had a good team with a lot of athletes,” SCHS Head Coach Darren Alford said. “Other than a few big plays on the defensive side of the football, we played a complete game. We were kind of banged up going into this game so I am very pleased with the outcome. We have a few weeks to get well now and get ready for the meat of our schedule so we can see if we can contend for the top of our region.” 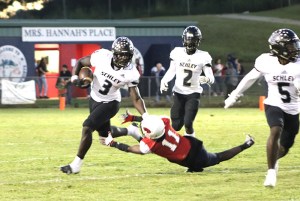 Schley County Freshman Running Back Zayden Walker (#3) rushed for 118 yards on 11 carries and scored three touchdowns to help lead the Wildcats to victory over Greenville.
Photo by Kaia McLennan

On offense, the Wildcats were clicking on all cylinders. Sophomore quarterback Jay Kanazawa completed 13 of 22 passes for 271 yards and threw three touchdown passes, while running backs Zayden Walker and Malachi Banks each scored two rushing touchdowns. Walker, a freshman, also caught a touchdown pass from Kanazawa in the second quarter.

Walker led the Wildcats’ rushing attack with 118 yards on 11 carries and Banks, a junior, rushed for 49 yards on 14 carries. Junior Mathew Nyguen also carried the rock for 16 yards on three carries and senior Sidney Blackwell rushed for seven yards on two carries. 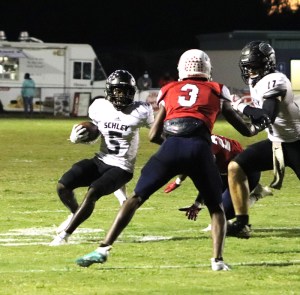 The Wildcats also got the job done catching the football as well. Sophomore JaLewis Solomon caught five passes for 155 yards and two touchdowns and Walker caught two passes for 40 yards, with one of those receptions being for a touchdown.

On the defensive side of the ball, the Wildcats made an impact as well. Junior Luke Forehand had two interceptions on the night and returned one of them 51 yards for an SCHS touchdown. In addition to forcing two turnovers, the Wildcats also got it done on Special Teams, as Zayden Walker and Clinton Jackson each blocked a punt.

The Patriots got on the scoreboard with 11:41 to go in the first quarter when quarterback A.J. Bridges threw a 63-yard touchdown pass to Jaime Wheelous. The extra point attempt failed, but the Patriots had drawn first blood and led 6-0. 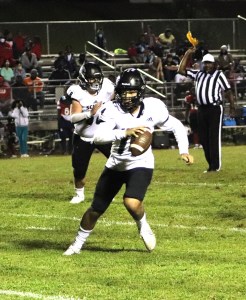 The Wildcats responded by moving the ball down to the GHS 13-yard line. Then Walker was able to score the first of his three touchdowns by running the ball 13 yards into the end zone. The extra point attempt by Javier Lopez was good and SCHS had a 7-6 lead with 10:41 left in the first quarter.

GHS responded with a big play by Javion Sands, who scored on a 59-yard run from scrimmage to give the Patriots a 12-7 lead, but the Wildcats countered with another scoring drive that culminated in a six-yard rushing touchdown by Banks. Lopez’s extra point attempt was good and SCHS led 14-12 with 4:33 to go in a back-and-forth first quarter.

However, from that point onward, the Wildcats took over the game. With 2:32 to go in the first quarter, Kanazawa threw the first of his three touchdown passes to Solomon for 62 yards. Lopez’s extra point was good and the Wildcats led 21-12. Then with 11:03 to go in the second quarter, Kanazawa found Zayden Walker for a nine-yard touchdown pass. The extra point by Lopez was good and SCHS had a double digit 28-12 advantage.

Then with 2:14 left before halftime, the Wildcats were able to add to their lead when Banks scored his second rushing touchdown of the night from three yards out. Lopez’s extra point was good and SCHS had a 35-12 lead at the half. 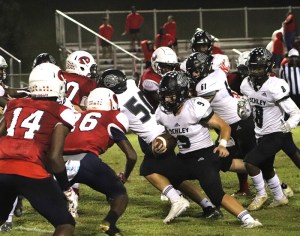 With 10:46 left in the third quarter, the Wildcats came up with a big play on defense when Luke Forehand intercepted a pass and ran the ball 51 yards back the other way for another SCHS touchdown. Lopez’s extra point was good and the Wildcats had a commanding 42-12 lead.

Then with 9:32 to play in the third quarter, Kanazawa connected with Solomon on a 49-yard passing play for another touchdown. This time, Carson Westbrook scored on a two-point conversion attempt to give the Wildcats a 50-12 lead.

The Patriots finally were able to respond offensively when Bridges connected with Wheelous for a 90-yard touchdown pass, but SCHS responded once again when Walker scored his third touchdown of the night on a 42-yard run from scrimmage.

The Wildcats will have next week off, but will return to action on Friday, October 8 when they host Macon County in another Region 5A-Public contest. Kickoff is scheduled for 7:30 p.m.