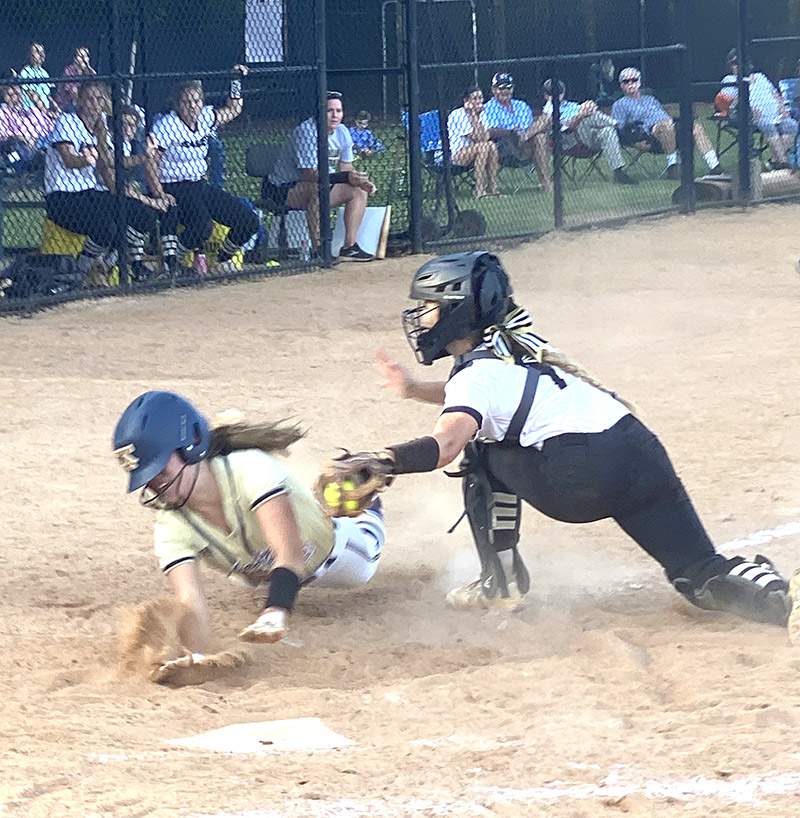 Southland Academy Catcher Avery Ledger tags out a TA runner at the plate. Ledger went 1 for 3 at the plate with an RBI for SAR against the Lady Panthers. Photo by Ken Gustafson

AMERICUS – The Southland Academy Lady Raider Softball Team (SAR) fell behind early against Tiftarea Academy (TA), but clawed their way back into the game by scoring one run in the third and two runs in the fourth inning. Unfortunately for SAR, it would not be enough as the Lady Panthers would go on to defeat the Lady Raiders 5-3 on Tuesday, September 28 at the Southland Academy Softball Complex.

In spite of the loss, SAR Head Coach Blaze Hargrove is very pleased with the improvement that his club making as the postseason draws near. Some of that improvement showed up in this game, as the Lady Raiders were able to get seven hits off TA sophomore lefthander Pyper McCard. In the first meeting of the year between these two teams in Chula on Thursday, September 2, McCard only gave up two hits and struck out 11 batters in the Lady Panthers’ 10-3 win over SAR. In Tuesday’s second meeting in Americus, the Lady Raiders were able to pound out seven hits off McCard and limited their strikeouts to five.

“As a coach, you want to see improvement throughout the year,” Hargrove said. “We go down there and she (McCard) was overpowering a little bit down there. We put the bat on the ball and forced them to make some plays and we battled. Even down there, it was a 5-3 game in the sixth and the wheels fell off in that sixth inning. Today, I couldn’t be more proud of them. That’s one of the top teams in our division in GISA. That’s one of the top two teams in the state and we gave them everything they wanted for seven innings, so I couldn’t be more proud of them. I just hope that they don’t let this linger and keep fighting and improving because the results don’t lie. We have definitely improved. I hope we keep going that way,” Hargrove continued. 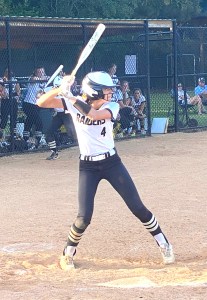 Southland Academy Centerfielder Morgan Minick went 3 for 4 at the plate to lead the Lady Raiders’ offense against Tiftarea Academy.
Photo by Ken Gustafson

SAR centerfielder Morgan Minick led the Lady Raiders’ offense by going 3 for 4 at the plate with three singles and shortstop Morgan Weaver went 2 for 3 with a double and a run scored.

Maddie Godwin got the start in the circle for SAR. In three innings of work, Godwin gave up five runs on three hits, walked two batters and struck out one. Ila Johnson came on in relief of Godwin and pitched four scoreless innings, while giving up two hits and walking three. 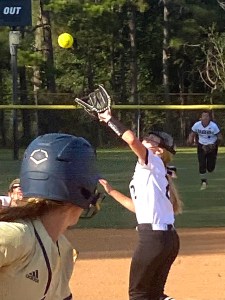 The Lady Panthers jumped out to a 2-0 lead in the top of the first and scored three more runs in the top of the third to take a 5-0 lead. However, the Lady Raiders were able to fight back in the bottom of the third when Jadie Burrell scored on a wild pitch. Then in the bottom of the fourth, SAR scored two more runs on two hits and a walk. Weaver led off the frame with a double and Ledger followed with an RBI single. Later on in the frame, courtesy runner Gracie Wilson scored on a wild pitch and the Lady Raiders found themselves trailing the 13-1 Lady Panthers by only two runs at 5-3. 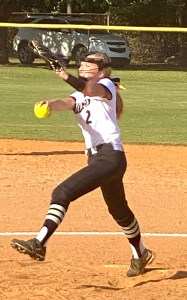 However, McCard returned to her usual dominant form and limited the Lady Raiders the rest of the way. Over the final three innings, McCard gave up no runs and gave up only two singles and a walk. In the bottom of the seventh, SAR made one last attempt at a comeback and they had a runner at second base with two outs. Morgan Minick them singled, but Jadie Burrell, the runner at second, tried to score on the play. However, Burrell was thrown out at the plate to end the game.

Elli Bryan and Hannah Grace Murphy each went 2 for 3 at the plate to lead the TA offense and McCard went the entire way in the circle for the Lady Panthers.  She gave up three runs on seven hits, walked three batters and struck out five. 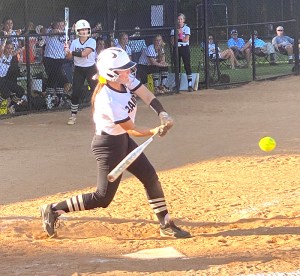 Southland Academy Shortstop Morgan Weaver belted a leadoff double in the bottom of the fourth inning against Tiftarea Academy.
Photo by Ken Gustafson

The Lady Raiders (9-8) will not have long to think about this loss, as they will head across the Flint River to Cordele to take on Crisp Academy on Wednesday, September 29. First pitch is scheduled for 4:30 p.m.