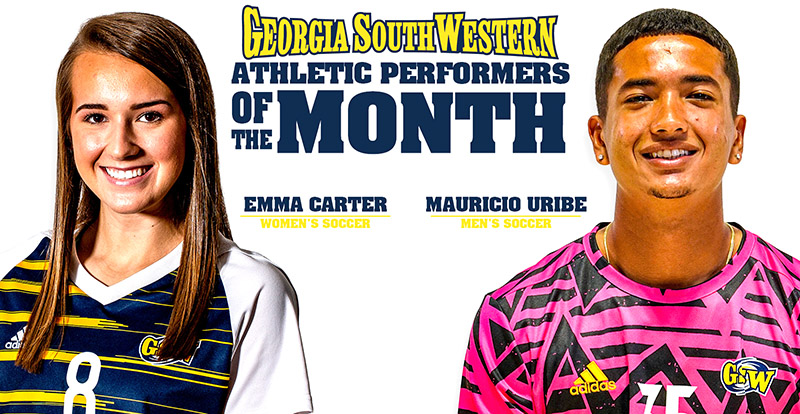 Carter, a sophomore from McDonough, GA., helped the GSW defense post a pair of shutouts over her seven matches played. She was on the pitch the entire 90 minutes against Peach Belt Conference opponent Georgia College in a 1-0 loss on Sept. 25, where the Lady Hurricanes held the Bobcats to their lowest goal total in the all-time series (16 matches). Carter followed that effort by giving GSW a 1-0 lead over the second-ranked team in NCAA Division II, Flagler College, on Sept. 29, with a goal from outside the top of the 18-yard box. It was the first goal of her collegiate career.

Uribe, a sophomore from Miami, Fla., turned in a pair of clean sheets during play in September. Uribe opened the month with a 3-0 shutout of Embry-Riddle on Sept. 11. His second clean sheet came a week later in 1-0 victory at USC Aiken for the Hurricanes first-ever win at the Pacer Pit. Uribe made five saves on Sept. 22, in a 1-1 draw with conference foe Clayton State. Over the five matches he played in the month, Uribe held opponents to five total goals. He currently leads the PBC in save percentage at .769 and his two shutouts are tied for the league lead.