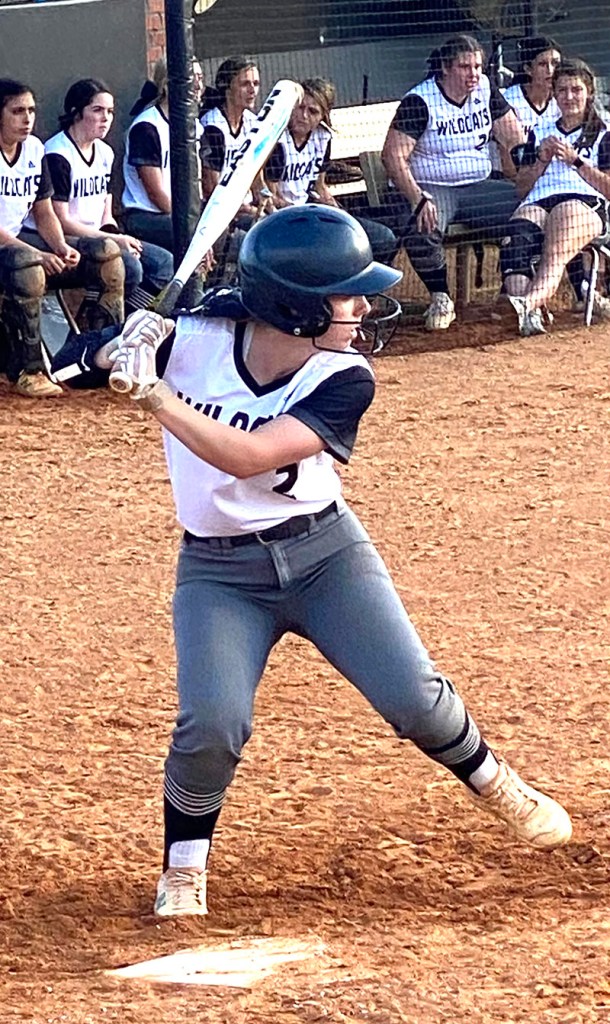 Schley County Third Baseman Landry Whaley went 1 for 3 at the plate with a single and three RBIs in the Lady Wildcats’ 7-6 loss at Bleckley County. ATR Archive

COCHRAN, GA – Going into the bottom of the fifth inning, the visiting Schley County Lady Wildcats (SCHS) had a 5-3 lead over Bleckley County (BCHS), but thanks mainly to a grand slam home run over the left field wall by BCHS third baseman Clara Rickerson in the bottom of the fifth, the Lady Wildcats would have to leave Cochran, GA with a 7-6 loss to the Lady Royals on Monday, October 4.

The grand slam by Rickerson put the Lady Royals up 7-5, but Schley County was able to get to within one in the top of the seventh. With one out, Emma Walker drew a walk off BCHS pitcher Addisyn Keel. Then Zoe Molina reached on an error and the Lady Wildcats had runners at first and third with one out. Maddie Walker then drove in Emma Walker on a sacrifice fly to centerfield, but Keel was able to get Landry Whaley to ground out to second base to end the game.

With one more game to play in the regular season, the Lady Wildcats are now 8-12 overall and are currently in second place in the Region 5A-Public standings at 4-2.

While SCHS was able to score six runs, the Lady Wildcats were only able to muster five hits in the contest. Molina, Emma Walker, Maddie Walker, Whaley and Berkley Goodin each earned one hit in the game, while Whaley was able to drive in three RBIs.

Lizzie Barineau got the start in the circle for the Lady Wildcats. In four innings of work, Barineau gave up a run on three hits and struck out one batter. Makenna Wurtz came on in relief of Barineau and gave up two runs on four hits in a little over an inning of work. Jaelyn Wynn was the third and final pitcher used by SCHS. In a little less than an inning, Wynn gave up four runs on four hits, including the grand slam by Rickerson.

Schley County jumped out to a 3-0 lead in the top of the third on two hits and took advantage of a walk and a dropped third strike. Molina drove in the first run of the game on an RBI single and Whaley would later drive in the Lady Wildcats’ second run on a sacrifice fly to centerfield. With Jaelyn Wynn the runner at third and two outs, Berkley Goodin struck out swinging, but the ball got by the BCHS catcher, allowing Wynn to score from third.

The Lady Royals responded in the bottom of the third with three runs on three hits to tie the game. The big hit came off the bat of Elisia Vickers, who drove in two runs on a double to left field.

The Lady Wildcats responded in the top of the fifth when Whaley drove in two runs on a single to left field to give SCHS a 5-3 lead, but the Lady Royals responded with the pivotal four-run bottom of the fifth. Riley Haley and Elisia Vickers led things off with back-to-back singles and Keel would later execute a bunt single with one out to load the bases for Rickerson. The senior third baseman then promptly deposited a fly ball over the left field fence for the grand slam, which ended up being the deciding play of the game. It was Rickerson’s only hit of the ball game, but it turned out to be the most important one.

The Lady Wildcats will try to flush the bad taste from this setback out of their mouths when they host Brookstone in their final game of the regular season on Wednesday, October 6. First pitch is scheduled for 5 p.m.