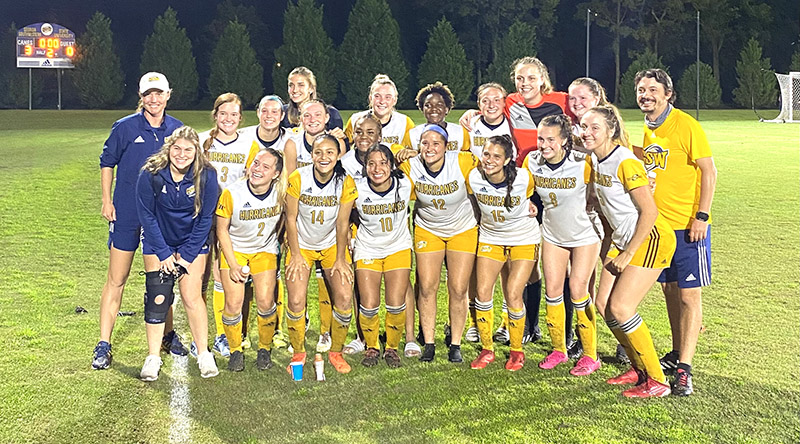 The Georgia Southwestern State University Women’s Soccer Team poses for a team picture after the Lady Hurricanes set a new program record with six wins in a season by defeating Edward Waters University 3-0 on Wednesday, October 6 at Hurricane Field. Photo by Ken Gustafson

AMERICUS – The Georgia Southwestern State University Women’s Soccer Team (GSW) set a new program record for most wins in a season (6) when the Lady Hurricanes defeated Edward Waters University 3-0 Wednesday evening, October 6, on a soaked and water-logged Hurricane Field.
With the win, the Lady Hurricanes are now 6-4 overall on the season and are 1-3 in the Peach Belt Conference (PBC).

“I think the girls started a little bit slow.  We picked it up in the second half and they played to more of the standard and level that has been kind of our brand this year,” GSW Head Coach Kerry Edwards said.  “We found a way to put a few in the back of the net and did what we needed to do tonight.” 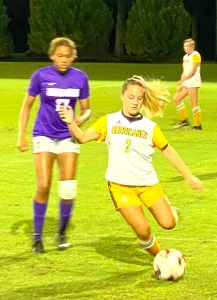 The Lady Hurricanes scored their first goal in the 17th minute when Avondrae Singleton dribbled the ball towards goal and took a shot that went past EWU Goalkeeper Sheila Pascual and into the left corner of the net.

For the remainder of the first half, GSW had plenty of chances to add to its lead, but couldn’t capitalize. As a result, both teams went into halftime with the Lady Hurricanes leading 1-0. 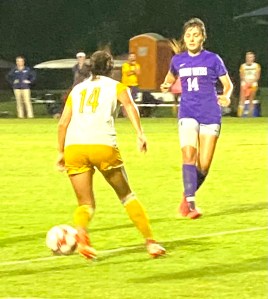 GSW Junior Forward Geraldine Alvarez (#14 in white) crossed a ball into the 18-yard box to Payton Johnson, who headed the ball into the net for a GSW goal in the 87th minute of the match against Edward Waters University.
Photo by Ken Gustafson

Throughout much of the second half, GSW kept up the pressure on the Lady Tigers’ back line and on Pascual, who tallied nine saves on the night for EWU. The Lady Hurricanes had numerous chances to add to their lead, as they had a total of 17 shots on goal for the game. However, in the 87th minute, GSW finally added to its lead when Geraldine Alvarez crossed the ball into the 18-yard box to Payton Johnson, who headed the ball into the back of the net.

Very shortly thereafter, GSW put the icing on the cake when Zyandra Thomas scored her fourth goal of the season to complete the Lady Hurricanes’ 3-0 clean sheet (shutout) of the Lady Tigers.

Some of the information in this story was obtained from GSW’s athletic website: www.gswcanes.com.
The Lady Hurricanes are in the midst of a two-game winning streak and will try to extend it to three when they host Clayton State University in another PBC match on Saturday, October 9 at 5 p.m.