Lady Raiders go toe to toe with Westfield, but fall in State Playoffs 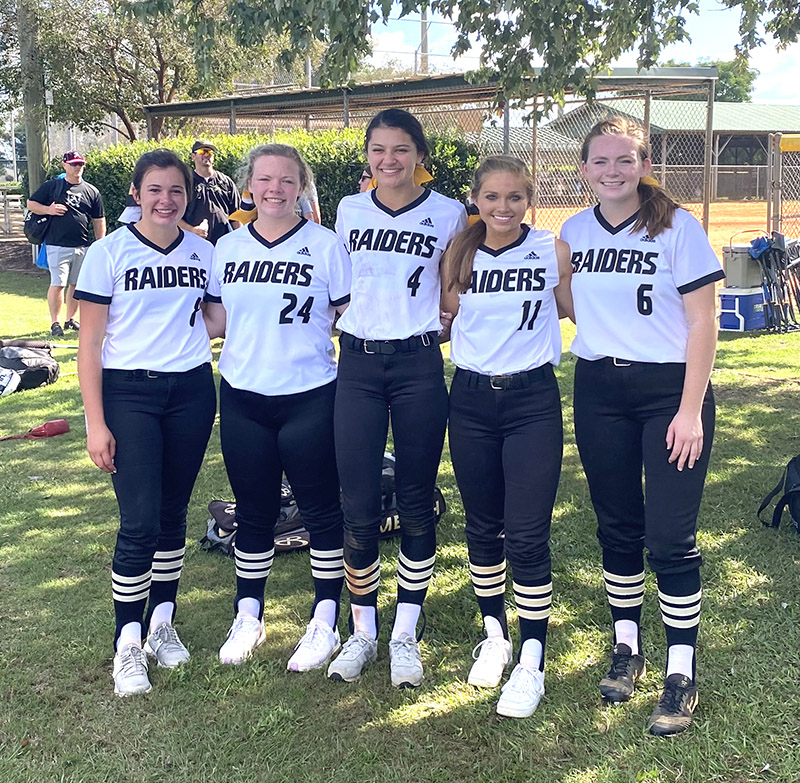 PERRY, GA – For most of the day, the Southland Academy Lady Raiders Softball Team (SAR) kept the hope of pulling off a huge upset over the four-time defending GISA State Champion Westfield Lady Hornets (WS) very much alive.  However, in spite of a brilliant performance from SAR Starting Pitcher Maddie Godwin, the Lady Raiders fell to Westfield 2-0 in Game 1 and dropped Game 2 to the Lady Hornets 12-1, thus ending the 2021 season for SAR in the first round of the GISA Class AAA State Playoffs on Saturday, October 9 at the Westfield School in Perry.

As a result, the Lady Raiders will conclude the 2021 season with a record of 9-12 and for five seniors: Morgan Minick, T.J. Bowden, Kayla Hudgins, Samantha Wojnar and Jadie Burrell, it will be their last time together as Lady Raider softball players.

In spite of the Lady Raiders’ early exit from the state playoffs and the season coming to an end, SAR Head Coach Blaze Hargrove expressed tremendous pride in his squad for its accomplishments, grit and the improvement that it has made throughout the season.

“I couldn’t be more proud of them,” Hargrove said.  “We gave the #1 team in the state everything they wanted.  We competed with them.  Obviously, facing a top end pitcher like that, runs are hard to come by, but we did a really good job competing today.  In eleven of the 12 innings, we were in the ball game.  We had that one blow up inning right there in the fifth of the second game and besides that inning, we did everything that we could possibly do and I couldn’t be more proud of them.  Throughout the season, we continued to battle and get better.  As a coach and hopefully as a player and a fan, that’s what you want to see: improvements throughout the season.  I felt like today, we played our best ball up until that one inning and so I couldn’t be more excited.”

Southland Academy senior pitcher Maddie Godwin gave up a run on two hits, issued four walks and struck out three in the Lady Raiders’ 2-0 loss to Westfield in Game 1.
Photo by Ken Gustafson

The Lady Raiders had a chance earlier in the game to take a 1-0 lead.  In the top of the second with one out, Avery Ledger doubled to centerfield off WS Starting Pitcher Sydney Langdon.  Unfortunately for SAR, Langdon was able to strike out both Godwin and Samantha Wojnar to snuff out the Lady Raiders’ threat.

Godwin was solid in the circle for the Lady Raiders. In five innings of work, she gave up one run on two hits, walked four batters and struck out three. Ila Johnson came on in relief of Godwin in the sixth inning and pitched well, giving up one run on one hit while issuing one walk.

While Godwin had a strong outing for SAR, Langdon was dominant in her own right for WS. In seven innings of work, She gave up no runs on two hits and struck out 11 SAR hitters while issuing one walk. Eva Grace Studdard and Avery Ledger were the only Lady Raiders to get hits off Langdon. 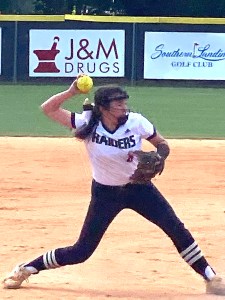 Southland Academy senior third baseman Jadie Burrell makes a throw to first base. Burrell went 1 for 4 on the day with a double in Game 2.
Photo by Ken Gustafson

In Game 2, the Lady Raiders got off to a dream start when Morgan Minick led things off with a single. After Ledger flew out to centerfield for the first out, Minick stole second and would eventually score the game’s first run when Landry Hart grounded into a fielder’s choice.

However, the Lady Hornets responded by tying the game in the top of the second when Madison Hammock drove in Kendall Fowler on an RBI single to centerfield. 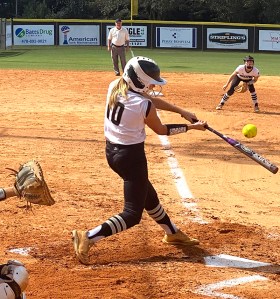 The Lady Raiders had a golden opportunity to regain the lead in the bottom of the third when Jadie Burrell led off the frame with a double and Wojnar moved Burrell over to third on a sacrifice bunt. However, WS Starting Pitcher Lauren Davidson struck out Minick and got Ledger to ground out to end the SAR threat.

WS would later take a 3-1 lead in the top of the fourth. With two outs, Davidson and Sadie Knight hit back-to-back singles and Marena Knowles was able to draw a walk to load the bases for Emmy Dehem. Dehem then took advantage with the bases loaded by driving in two runs on an RBI double. This was an unfortunate sequence of events for the Lady Raiders, as they were able to turn a double play earlier in the inning and were one out away from getting out unscathed. 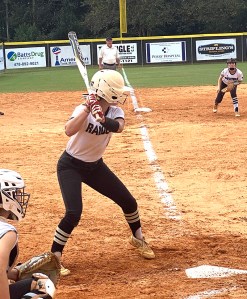 Southland Academy freshman catcher Avery Ledger went 1 for 4 with a double in the two-game state playoff series against Westfield.
Photo by Ken Gustafson

In the bottom of the fourth with one out, the Lady Raiders were able to get a runner on base when Bowden singled to right field, but Morgan Weaver popped out to second and Godwin grounded out to third to end the inning.

Up until this point in Game 2, the Lady Raiders still had a chance, but in the top of the fifth, things fell apart. The Lady Hornets scored nine runs on five hits and took advantage of an error and four walks. The big blow came off the bat of Marena Knowles, who belted a grand slam home run over the right field wall to give WS a 10-1 lead. After Dehem drew a walk, the Lady Hornets added two more runs when Carleigh Knowles doubled to left field. The Lady Raiders were held scoreless the rest of the way and WS went on to win the second game 12-1 and sweep the best-of-three-game series. 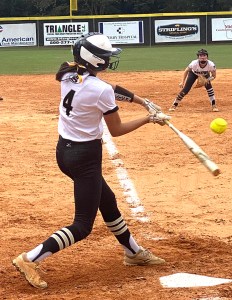 Southland Academy senior centerfielder Morgan Minick went 1 for 2 at the plate with a single and a run scored in Game 2 of the GISA Class AAA State Playoffs against Westfield.
Photo by Ken Gustafson

Minick, Bowden and Burrell were the only Lady Raiders to earn hits in Game 2 and Landry Hart drove in the Lady Raiders’ only run on a fielder’s choice in the first inning.

Davidson went the entire way in the circle for the Lady Hornets. She gave up one run on three hits and had five strikeouts.

With softball coming to an end, many of these Lady Raiders will go on to represent Southland Academy throughout the rest of the year in other sports such as basketball, track and soccer.