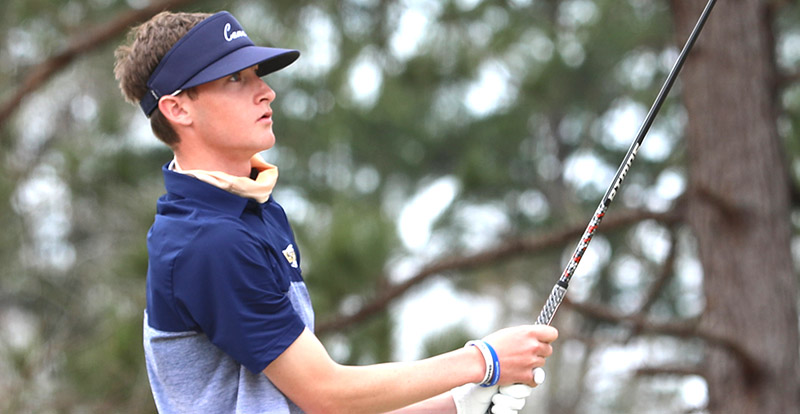 Georgia Southwestern State University Sophomore Golfer Payne Sells shot a 71 in Round 1 and a 74 in Round 2 to earn the Hurricanes’ low score of the day on the first day of competition (Monday, 10/18) at the Copperhead Championship in Innisbrook, FL. Photo by Christopher Finn

INNISBROOK, FL — The 10th-ranked Georgia Southwestern men’s golf team posted a 21-over 589 on Monday in the opening two rounds of the Copperhead Championship hosted by the University of West Florida to sit in eighth place out of 17 teams. The 54-hole event is being played at the Innisbrook Resort on the Copperhead Course (Par 71, 7,209 Yards) and features 11 ranked teams with six of the top ten teams in the country participating.

Payne Sells had the Hurricanes’ low score of the day with a 3-over score after two rounds, having six birdies in Rounds 1 and 2.

Simon Estrada finished second on the team with a 6-over on the day and tied for 29th place. Alex Wells was a stroke back of Estrada while Chase McLain and Saksit Jairak finished with rounds of 10 and 12 over.

Saint Leo closed the day atop the team standings with a three-stroke lead over fellow Peach Belt member Lander University. Alberto Castagnara from Saint Leo finished at 3-under for the low score of the day among the field of 90 golfers.

The tournament wraps up Tuesday.