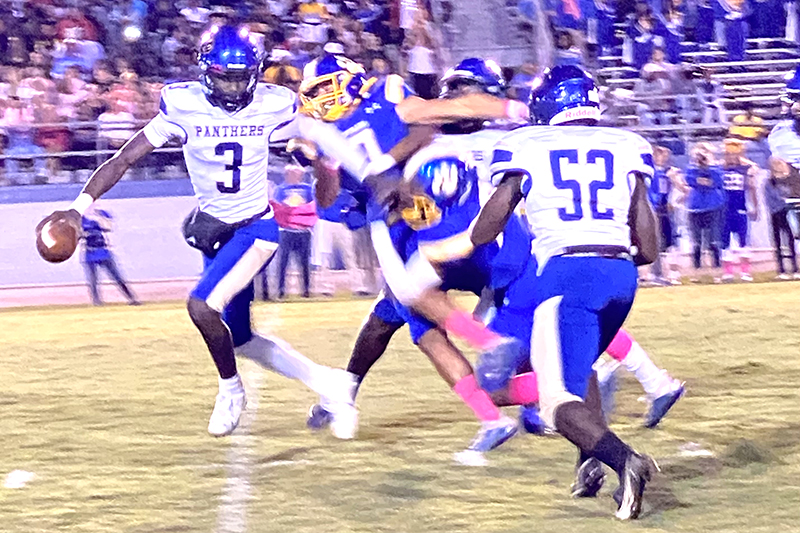 CORDELE – Both the Crisp County Cougars (CC) and the Sumter County Panthers (SCHS) came into Friday night’s Homecoming game at Crisp County with the same short-term goal: win the game. However, both teams have very different long-term goals, as far as their seasons are concerned. For Crisp County (5-3, 5-0 Region 2-AAA), the goal was to win in order to stay undefeated in region play and to stay at the top of the Region 2-AAA standings. For the winless Sumter County Panthers (0-7), it was simply to win a game so that they could enjoy a ray of light in an otherwise dark and dismal season. The first play of the game would pretty much determine the outcome of the game, and it went in favor of the Cougars. SCHS won the toss, but elected to defer. The Cougars had the ball at their own 45-yard line to start the game and they scored on the first play of the game when quarterback Jack Carter threw a 55-yard touchdown pass to Eric Ivory. That play set the tone for the rest of the evening and led to the Cougars’ 59-12 rout of the Panthers at the Cougar Den.

For Crisp County, it was another feather in the cap in this on-going “Battle of the Flint”, but for the Panthers, it was simply an “Ordeal in Cordele.”

For CC Senior A’kyra Harris, it was a night she will never forget, as she was named the 2021 Crisp County Homecoming Queen.

The Cougars were coming off a 27-14 win over Peach County the week before and Head Coach Miguel Patrick wanted his club to continue its good form. According to Patrick, the Cougars accomplished what he and his staff wanted them to accomplish in the contest against the Panthers.

“We definitely did. The guys executed really well in the fist half,” Patrick said. “We played fast. We played physical. We did everything we wanted to do. We scored the ball at will, so I’m happy with our performance.” 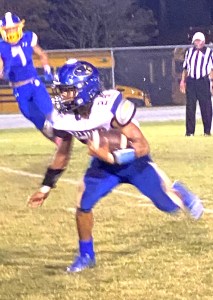 Sumter County Running Back Jarod Lewis catches a pass and tries to fight for yardage.
Photo by Ken Gustafson

Though they had an extremely rough first half and came out on the short end in this game, Sumter County Head Coach Ross Couch was extremely pleased with how his team fought and battled in the midst of very difficult circumstances.

“In the first half, there were a lot of things that we didn’t do well, both from a coaching standpoint and a player standpoint, mostly from a coaching standpoint,” Couch said. “In the second half, our kids busted their butts. They kept fighting. They never gave up. We started making plays, moving the ball. I’ll tell you this: there’s no quit in these kids. No matter what, they’re going to keep fighting and that’s what I love about them.”

After the touchdown by the Cougars at the beginning of the game, the Panthers tried to move the football on their next possession, but couldn’t do so, as quarterback Cameron Evans was sacked on third down by CC linebacker Ethan Pollock. As a result, the Panthers were forced to punt, but the Cougars made a tremendous special teams play when Jalen Smith blocked Mason Herron’s punt. Julian Fox then picked up the loose ball and ran it into the end zone for a Cougars touchdown. The extra point was good and CC had a 14-0 lead. 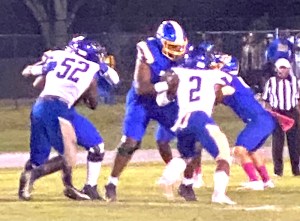 Shortly thereafter, the Cougars would get the ball back and would take advantage on their next possession when running back Marquise Palmer scored a rushing touchdown from 26 yards out. The extra point was good and CC led 21-0 with 1:20 to go in the first quarter. A few minutes later, CC added to its lead when Carter found Trae Walker in the end zone for a touchdown.

On the Panthers’ next possession, they had the ball down inside their own 5-yard line when Evans went down in the end zone for a safety, making the score 23-0 in favor of the Cougars.

Sumter County was unable to move the ball on its next possession. When the Cougars got the ball back, they would mount a drive that would end with a five-yard rushing touchdown by Ahmad Brown. A.J. Pollock caught a pass in the end zone for a two-point conversion for a 38-0 CC lead.

Shortly thereafter, Brown would score a defensive touchdown when he picked off Evans’ pass and scampered 37 yards back the other way. The two-point conversion try was good and the Cougars led 52-0 with time still left in the first half.

However, CC was still not done, as Carter would find Brown in the end zone for another touchdown pass. By halftime, the Cougars were comfortably ahead 59-0. 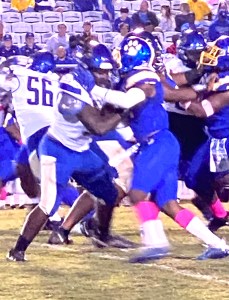 Things didn’t go well at all for the Panthers in the first half, but they still kept fighting and their persistence would pay off. The SCHS offense was able to mount a drive in the second half that resulted in a touchdown pass from Evans to Kadarrius King. Later on in the half, Evans found King again in the end zone for another touchdown. Though the Panthers came out on the short end, they were able to take some positive things out of this game.

Up next for the Cougars is a home game against the Chargers of Central-Macon (1-8, 1-5 Region 2-AAA), who lost to Pike County 10-7 on Friday. Kickoff from the Cougar Den is scheduled for Friday, October 29, at 7:30 p.m. As for the Panthers, they will try once again to earn their first win of the season when they host Pike County (3-5, 2-3 Region 2-AAA) on Friday, October 29. Kickoff from Alton Shell Stadium is scheduled for 7:30 p.m.