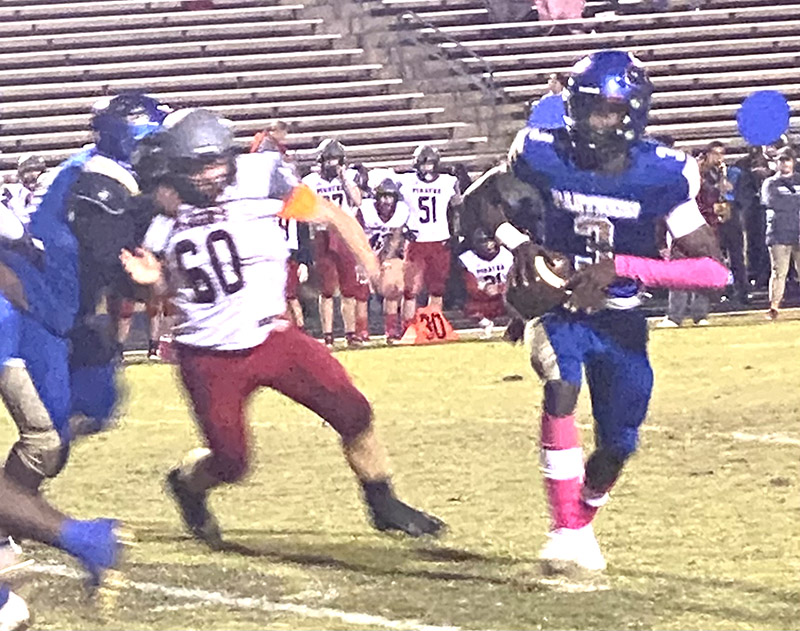 Sumter County Junior Quarterback Cameron Evans (#3) completed 24 of 31 passes for 338 yards and threw six touchdown passes to lead the Panthers to their first win of the 2021 season: a 48-35 victory over Pike County on Homecoming Night at Sumter County High School. Photo by Ken Gustafson

AMERICUS – It was the night that the Sumter County High School Football Team (SCHS) had been longing and looking for all season and it happened on SCHS Homecoming Night.  Unlike the Panthers’ previous seven games, the outcome on this night would be different.  SCHS junior quarterback Cameron Evans threw six touchdown passes and senior wide receiver Traunta Robinson caught three touchdowns to help lead the Panthers (1-7) to their first victory of the season: a 48-35 win over the 3-6 Pike County Pirates on Friday, October 29, at Alton Shell Stadium.

“They did a great job of executing the game plan. Our goal was to attack underneath, move the football, drive the field and then take shots when need to, when we had the opportunity,” SCHS Head Coach Ross Couch said.  “They did a great job of executing. Cam Evans had a hell of a game checking out and stuff like I’ve known he could the whole time, running the ball hard. Jarod Lewis, while he wasn’t a factor in the first half, he shut the game down with his running ability.” 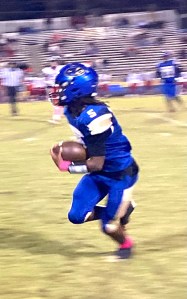 Couch also had tremendous praise for the play of wide receivers Anthony Tyson and Kadarrius King, as well as the SCHS offensive line. Tyson had five catches for 130 yards and caught two touchdown passes, while King hauled in two catches for 24 yards, with one of those receptions being for the Panthers’ first touchdown of the game. Traunta Robinson was a go-to guy in this game as well. The SCHS senior caught six passes for 94 yards and three touchdowns, while wide outs Kavon Lewis and Traveon Lamar combined for 97 yards on nine receptions. In total, the Panthers’ wide receiving corps produced 338 yards of offense on 24 receptions scored six of the seven SCHS touchdowns on the night.

Evans had an outstanding night for the Panthers as their signal caller. The SCHS junior completed 24 of 31 passes for 338 yards and threw six touchdown passes. He also had a solid game on the ground, rushing for 102 yards on 10 carries. Evans’ teammate, senior Jarod Lewis, rushed for 63 yards on 16 carries and scored one rushing touchdown in Panthers’ win over the Pirates.

The Pirates won the coin toss and elected to receive. They had the ball deep in their own territory when the Panthers forced a fumble and recovered the ball at the PC 14-yard line. A couple of plays later, Evans threw a 14-yard touchdown pass to Kadarrius King. The extra point by Jose Diaz was good and for one of the few times this season, SCHS had an early 7-0 lead with 10:40 to go in the first quarter.

However, the Pirates responded by using their running attack to move the ball all the way down inside the SCHS five-yard line. Then running back Jakilen King scored the first of his four touchdowns from four yards out. The extra point by Ozzie O’Steen was good and the score was tied at 7-7 with 4:02 to go in the first quarter. 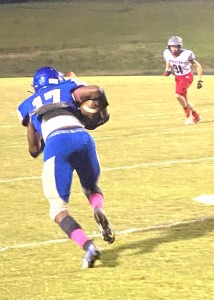 Sumter County Junior WR Kavon Lewis (#17) catches a pass and runs for yardage. Lewis had four catches for 52 yards in the win over Pike County.
Photo by Ken Gustafson

On the Panthers’ ensuing possession, they had the ball deep in their own territory, but two false start penalties pushed them back even further down to their own 5-yard line. The SCHS offense was not able to gain the necessary first down yardage and the Panthers were forced to punt, giving PC excellent field position at the SCHS 23-yard line. The Pirates would end up taking advantage of that field position when King scored his second touchdown of the night from four yards out. O’Steen’s extra point was good and the Pirates were in the lead again 14-7.

The Panthers were able to respond, however, as the offense was able to move the ball into PC territory. Evans then found Traunta Robinson for a 25-yard touchdown pass. Diaz’s extra point was good and the score was tied once again at 14-14 with 4:11 to go before halftime. 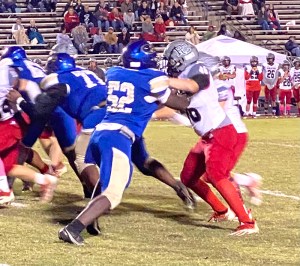 The Pirates weren’t going away though. On their next possession, King was able to break free and scampered 57 yards for another touchdown. O’Steen’s extra point was good and PC once again had the lead 21-14 with 3:24 to go before the half.

However, like a boxer that just would not go down for the count no matter how much he was getting beat up, the Panthers wouldn’t go down either. On SCHS’s next possession, Evans found Tyson for a 45-yard touchdown pass. Diaz’s extra point was good and the score was once again tied at 21-21.

Then on the ensuing kickoff, Diaz attempted an on-side kick that glanced off the leg of one of the PC up men and Lavaris Milledge was able to recover the ball for the Panthers. SCHS took advantage of its good fortune when Evans found Tyson again for a 43-yard touchdown pass. Diaz’s extra point was no good, but SCHS led 27-21 with 1:58 to go before halftime.

However, the Panthers’ lead was short-lived, as the Pirates scored a touchdown on a 75-yard kickoff return on the ensuing kickoff. O’Steen’s extra point was good and PC led 28-27 with 1:47 to go before halftime.

The Panthers were able to mount a quick drive threw the air thanks to some completed passes by Evans and had the ball down inside the Pirates’ 10-yard line, but with five seconds left, Evans’s pass into the end zone fell incomplete, concluding what was a thrilling, high-scoring first half. The Panthers trailed at halftime 28-27, but unlike previous games this season, the offense was clicking and the hope for victory was very much alive.

The Panthers got the ball to start the second half and wasted no time moving the ball down into PC territory. Then Evans found Traunta Robinson in the end zone for a short touchdown pass. Diaz’s extra point was good and SCHS led 34-28 early in the third quarter. 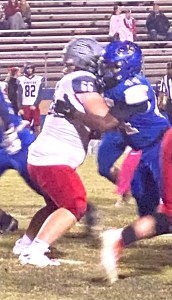 The SCHS defense was able to stop the Pirates on their next possession and the SCHS offense took advantage by once again moving the football down inside the PC 10-yard line. Then Evans capped off the drive with another touchdown pass to Robinson. The PAT by Diaz was good and SCHS had a 41-28 lead.

However, the Pirates responded with another drive that ended in points. Aided by a facemask penalty against the Panthers, PC was able to climb back to within six points when King scored another touchdown from five yards out. O’Steen’s extra point was good and the Panthers were holding on to a 41-35 lead with 5:47 to go in the game.

PC tried an on-side kick to get the ball back, but the ball was recovered by SCHS. On their next possession, the Panthers were flagged with an unsportsmanlike conduct penalty, but they were able to overcome that by using their running game to move the ball all the way down to the PC 13-yard line. Then Jarod Lewis was able to earn the necessary yardage to get a first down and would later put the nail in the Pirates’ coffin by scoring a rushing touchdown from three yards out. The extra point by Diaz was good and SCHS led 48-35.

With a minute to go in the game, the Pirates had one last chance to score, but the Panther defense came up with two sacks of PC quarterback Gage Lee and were finally able to taste victory with a 48-35 win over the Pirates.

The Panthers will close out the 2021 season on Friday, November 5, when they host Mary Persons on Senior Night. Kickoff is scheduled for 7:30 p.m.