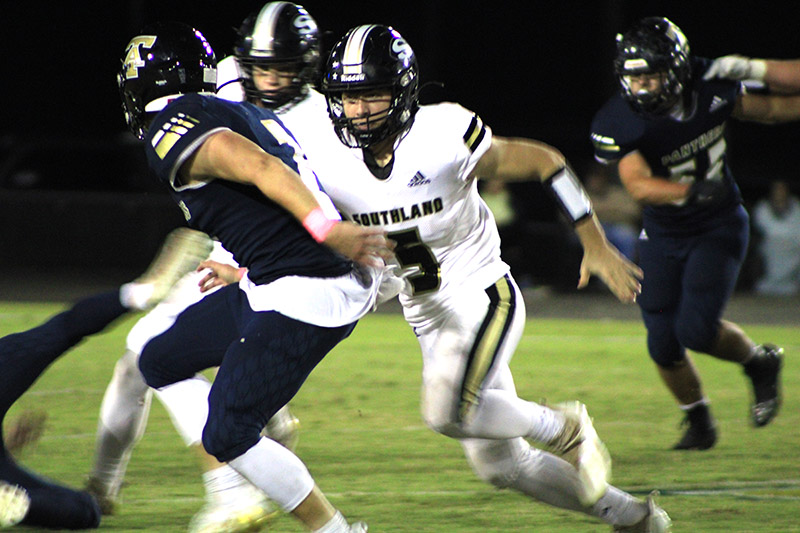 Southland running back David Dickens rushed for 42 yards on eight carries in the Raiders’ 27-13 loss to Tiftarea Academy. Photo by Kayla Hudgins

CHULA, GA – The Southland Academy Raider Football Team (SAR) made the trip down to Chula, GA near Tifton on Friday, October 29, with hopes of increasing its four-game winning streak to five with a win over region opponent Tiftarea Academy (TA). However, the Raiders were unable to stop the Panthers’ running game, as TA quarterback Dylan Harbort rushed for 230 yards on 35 carries and scored three rushing touchdowns while passing for a fourth to lead the Panthers to a 27-13 victory over the Raiders, thus ending SAR’s four game winning streak.

The Raiders are now 5-4 overall on the season and are 1-1 in the GISA Region 3-AAA standings. With the win, TA improves its overall record to 4-5 and is also 1-1 in region play. 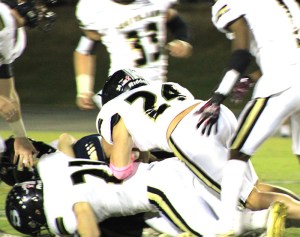 SAR quarterback Chase Ledger led the Raiders’ rushing attack with 63 yards on five carries and Fullback John Saye scored the Raiders’ only touchdown on one of his two carries. Running back David Dickens rushed for 42 yards on eight carries and his SAR teammate, Hudson Collins, toted the rock for 20 yards on seven carries. 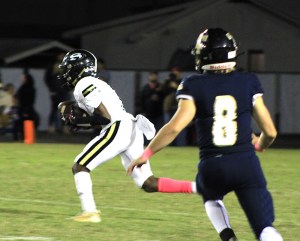 SAR cornerback Cedric Smith had one interception in the game against Tiftarea Academy.
Photo by Kayla Hudgins

On the defensive side of the ball, the Raiders were able to come up with two interceptions from cornerback Cedric Smith and linebacker Fisher Britt.

The Raiders will try to finish out the regular season and get themselves ready for the GISA Class AAA State Playoffs when they host Brookwood on Senior Night at Harvey Simpson Stadium on Friday, November 5. Kickoff is scheduled for 7:30 p.m.