Wildcats take care of business with win at Manchester 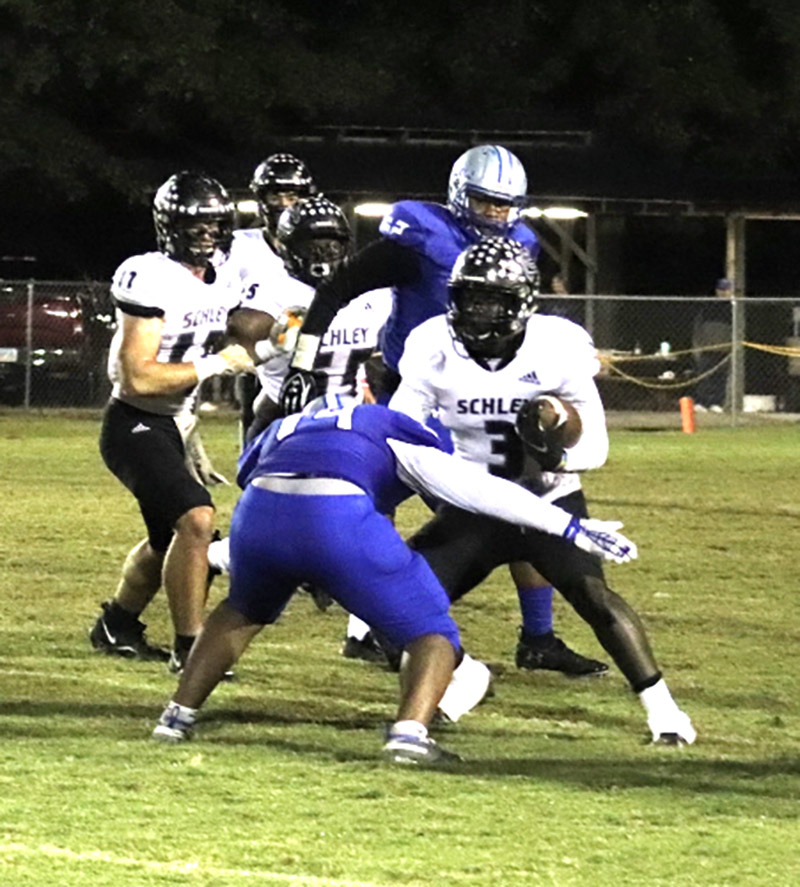 Schley County Running Back Zayden Walker (#3) rushed for 86 yards on 13 carries and scored two touchdowns to lead the Wildcats to a 24-6 win over Manchester. Photo by Kaia McLennan

MANCHESTER, GA – The Schley County Wildcats (SCHS) traveled up to Manchester, GA on Friday, October 29 and took care of business by defeating the Manchester Blue Devils 24-6.  With the win, SCHS is now 8-1 overall and is now in second place at 5-1 in the GHSA Region 5A-Public standings behind undefeated Macon County (6-0) with one final regular season game remaining before the state playoffs.

“I felt real good about our performance Friday.  We played well in all aspects of the game. Our run defense was spectacular and I felt that we tackled well,” SCHS Head Coach Darren Alford said. “Offensively, our passing game was really sharp. Overall, I think going on the road and winning a tough region game gave us a lot of confidence moving forward.  I don’t think we will have a let down this week and I think our kids will come ready to work.” 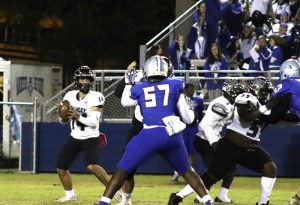 Schley County Quarterback Jay Kanazawa (#14) completed 21 of 29 passes for 210 yards and one touchdown pass to help lead the Wildcats to victory.
Photo by Kaia McLennan

While the wide outs did their jobs, much of the Wildcats’ success on offense was the result of a solid ground game. Freshman running back Zayden Walker led the way with 86 rushing yards on 13 carries and two rushing touchdowns.

SCHS also got a superb defensive effort from several players, including Senior MLB Sidney Blackwell, who led the Wildcats in tackles with 11.  In addition to Blackwell’s success, Sophomore Free Safties Carson Westbrook, Kabreon Aldridge and Junior OLB Luke Forehand each had a total of six tackles on the night, while Sophomore MLB Jack Clark tallied five.

Both Walker and Junior DT Reggie Hinton each earned a sack in this game and Clark came up with an interception. 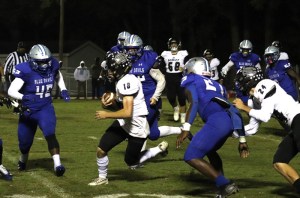 The Blue Devils responded with 8:39 left before halftime when running back Qua Cooper scored from four yards out. The extra point was no good, but MHS only trailed 10-6. Neither team could score for the remainder of the first half and the Wildcats went into the locker room with a slim 10-6 lead.

However, with 5:31 to go in the third quarter, the Wildcats were able to reestablish their double-digit lead when Kanazawa connected with Clinton Jackson for a 25-yard touchdown pass. Lopez’s extra point was good and SCHS led 17-6.

Neither team was able to change the scoreboard during the remainder of the third quarter and throughout much of the fourth, but with 1:38 to go in the game, the Wildcats secured their victory when Walker scored the second of his two rushing touchdowns on a 47-yard run from scrimmage.

The Wildcats will close out the regular season at winless Central (Talbotton) on Friday, November 5, at 7:30 p.m.