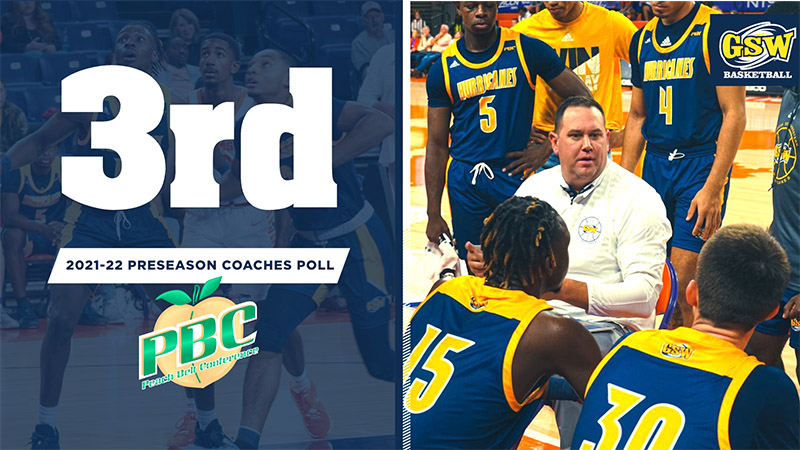 GSW Men’s Head Basketball Coach Aaron Coombs is in the middle of a timeout during the Hurricanes’ preseason scrimmage game against Clemson. The Hurricanes have been picked to finish in third place in the Peach Belt Conference in the PBC’s preseason poll. Submitted Photo

AUGUSTA — The Peach Belt Conference (PBC) has released the men’s basketball preseason coaches poll and preseason All-Conference team, as the league prepares for the 2021-22 season.

Georgia Southwestern State University (GSW), who reached the PBC Tournament championship game for the first time in school history last year and returned to the NCAA Tournament, was third in the voting with 66 points. The Hurricanes return preseason All-Conference selection Dante Tatum this season, along with six others. The Hurricanes look to reach the NCAA tournament for the second straight year, an accomplishment that has never been achieved in the program’s history.

Flagler College was the top selection in the coaches preseason poll. The Saints won their first PBC regular-season and tournament championships last season.

Augusta University finished second in the coaches poll with a pair of first-place votes and 68 total points.  USC Aiken and Columbus State rounded out the top five.

Coaches were not permitted to vote for their own teams.