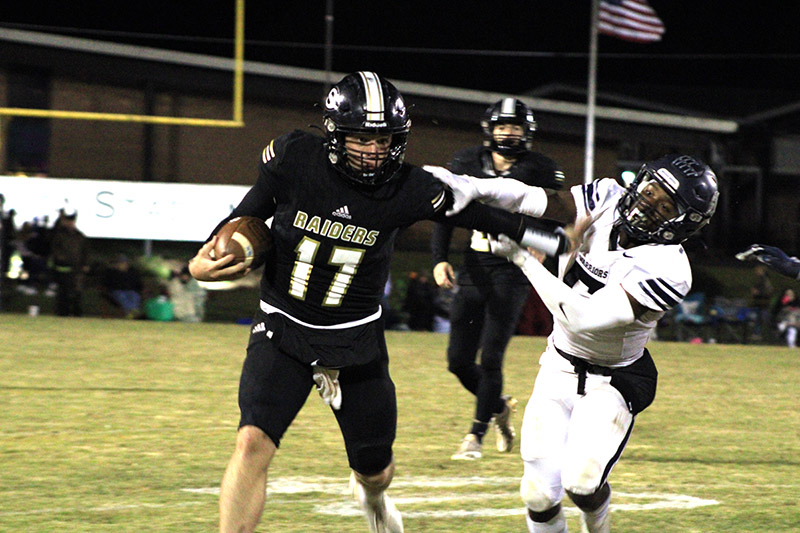 Southland Academy quarterback Chase Ledger completed 10 of 19 passes for 113 yards and one interception in the Raiders’ 16-15 loss to Brookwood. Photo by Kayla Hudgins

AMERICUS – The Southland Academy Football Team (SAR) came into its final regular season home game against Brookwood (BKW) having won four of its last five games. The Raiders were hoping to make it 5 out of 6 with a win over the Warriors and to send 13 SAR seniors out on a positive note. SAR had a 15-9 lead with 52 seconds left and were trying to stop the Warriors from scoring a come-from-behind victory in the last minute, but BKW quarterback Rodge Waldrop was able to find Strong Beverly in the end zone for a nine-yard touchdown pass to tie the game. Kicker Johann Sitzer then kicked the extra point and the Warriors escaped Americus with a 16-15 victory over the Raiders on Friday, November 5, at Harvey Simpson Stadium.

“We competed for four quarters. It was a great effort against a very good team,” SAR Head Football Coach Rod Murray said.

With the loss, the Raiders end the regular season with an overall record of 5-5 and 1-2 in the Region 3-AAA standings, but will host Valwood in the first round of the Georgia Independent School Association (GISA) Class AAA State Playoffs on Friday, November 12, at 7:30 p.m. 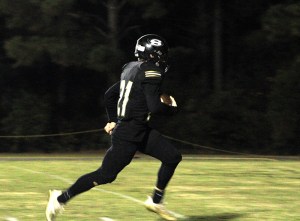 Southland running back Hudson Collins rushed for 55 yards on 12 carries and scored two touchdowns in the Raiders’ loss to Brookwood.
Photo by Kayla Hudgins

SAR quarterback Chase Ledger completed 10 of 19 passes for 113 yards and one interception and Henry Johnson caught one pass for 20 yards. In total, the Raiders amassed 194 yards of offense on 57 plays, but turned the ball over twice with a fumble and an interception.

On the defensive side of the ball, the Raiders were able to force three turnovers, as Waldrop was intercepted three times. However, the Warriors were able to amass a total of 235 yards of offense on 58 plays from scrimmage.

Penalties on both sides played a factor in this game. The Warriors committed five penalties for 40 yards, while the Raiders were penalized six times for 55 yards.