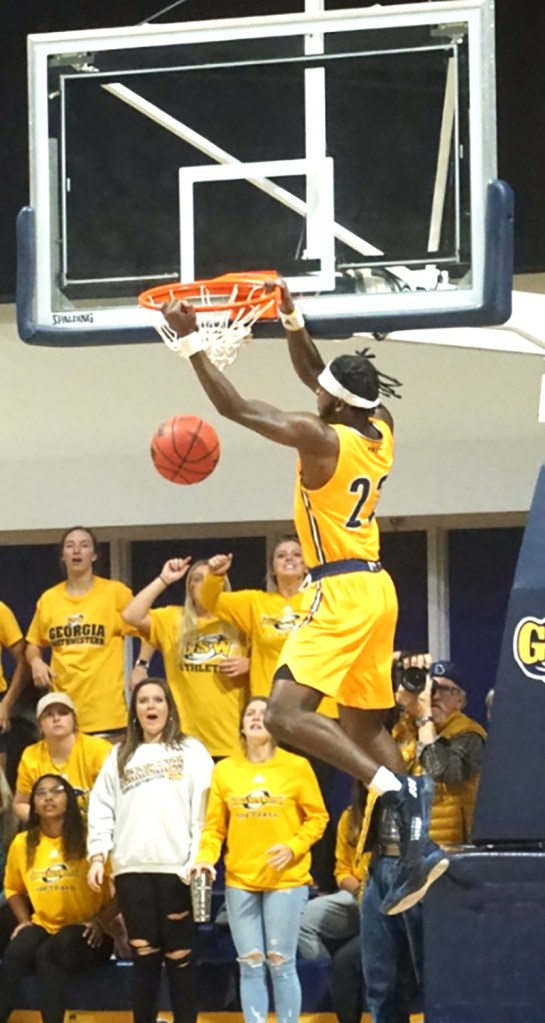 GSW senior guard Donte Tatum goes up for a slam dunk against Albany State. Tatum led the Hurricanes with 20 points in the loss to the Golden Rams. Photo by Christopher Finn

AMERICUS – The Georgia Southwestern State University Men’s Basketball Team (GSW) suffered an 80-75 defeat to Albany State (ASU) in its season opener in front of an amped up, raucous crowd at the Storm Dome on Wednesday evening, November 17.

While the Hurricanes only shot 28 percent from beyond the arc, the major difference in the game was rebounding. The Golden Rams outrebounded GSW 48-33 and had a 19-4 advantage over the Hurricanes in second-chance points.

While GSW Head Coach Aaron Coombs gave credit to ASU for earning the win, he was extremely disappointed in his club’s performance, especially on the offensive glass.

“First of all, Coach (Patrick) Gayle did a great job with his team. They out played us,” Coombs said. “Having said that, we won’t win a single game all year if we give up 17 offensive rebounds. All we talked about was rebounding. We didn’t do it. We didn’t do it. I mean, it’s an absolute embarrassment. We should apologize to every single fan. To have this environment and come out here and play like that…it’s embarrassing. I can promise you this: It will never happen again! It will never happen again! It’s an absolute embarrassment by my team. It’s 100 percent my fault because they weren’t ready to play and we will be better.”

Forward Jacorie Archie scored 11 and senior guard Devon Higgs chipped in 10 in the losing cause.

The first half was a back-and forth affair between the two teams, but ASU led 33-32 at the half. However, the Golden Rams went on a 12-6 run over the first three minutes of the second half. That run was capped off by a three-pointer by ASU guard Joshua Jerome. Over the next two and a half minutes, there wasn’t a whole lot of scoring from either team, but the Rams took a 49-41 lead with 14:48 to play on a layup by Kevin Perry. 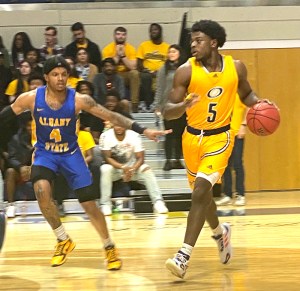 GSW quickly cut the ASU lead to five on a three-pointer from Tatum, but the Hurricanes weren’t able to come to within two points until Jacorie Archie scored on a layup with 11:30 to go. This got the crowd into the game and it seemed like the momentum was about to swing in favor of the Hurricanes.

However, the Golden Rams scored seven unanswered points to take a 60-51 lead and over the next several minutes, the closest the Hurricanes could get was five points. Then with 4:30 to go, ASU took a 73-61 lead on two free throws from Malik Parker. 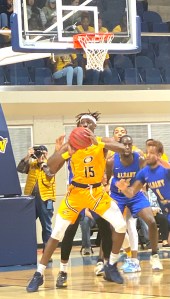 The Hurricanes were successful in using their defensive pressure to force turners and they scored 23 points off those turnovers. However, as Coombs pointed out, they were outworked by the Golden Rams on the boards. 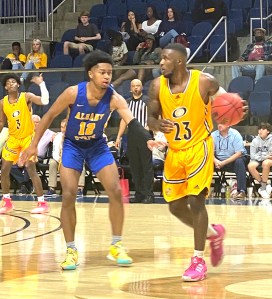 Donte Tatum is on the dribble for the Hurricanes. In addition to his 20 points, Tatum dished out eight assists, grabbed three rebounds and had four steals against Albany State.
Photo by Ken Gustafson

ASU had three players score in double figures. Maxwell Harris led all scorers with 24 points. Malik Parker poured in 18 points and Kevin Perry chipped in 15 for the Golden Rams in the winning cause. 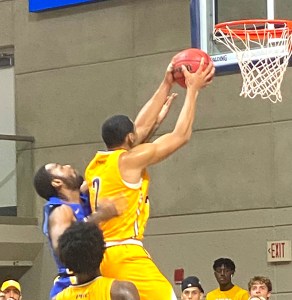 Then after the Thanksgiving Break, the Hurricanes will head down US Highway 19 to Albany on Wednesday, December 1, for the rematch with the ASU Golden Rams. Tip-off for that game is scheduled for 7 p.m.