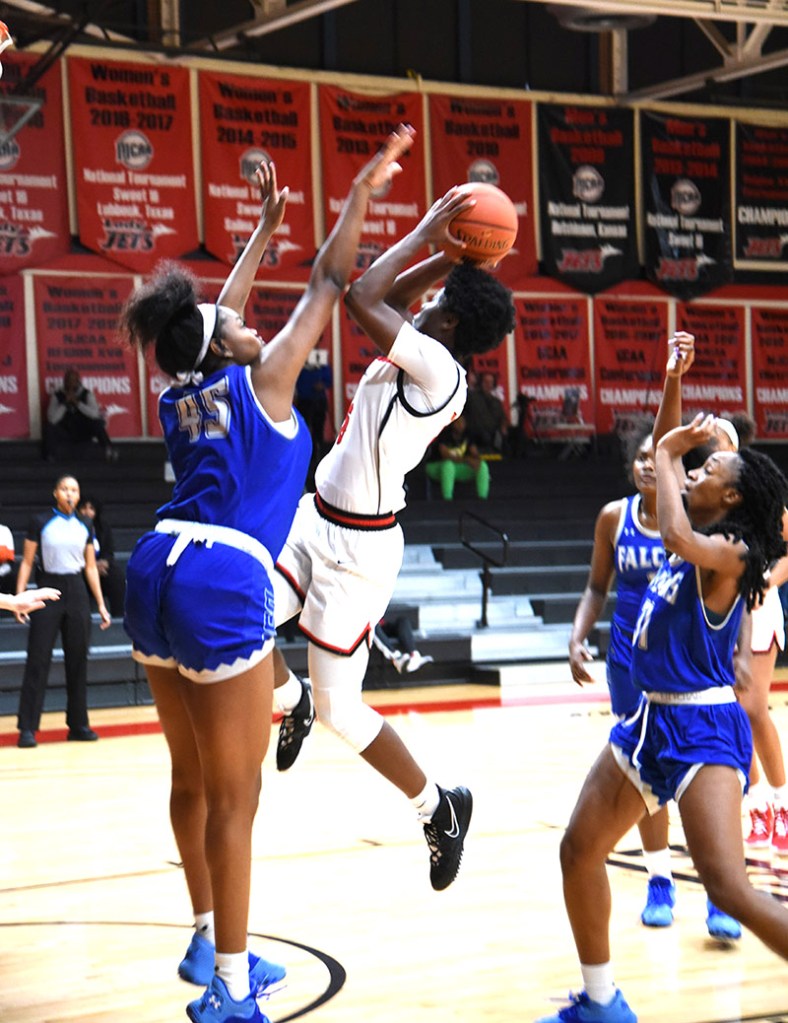 Alexia Dizeko (5) is shown driving to the bucket. She was the high scorer for the Lady Jets in both games of the Pete Arrington Classic Tournament. Photo by Su Ann Bird

AMERICUS – The NJCAA nationally ranked South Georgia Technical College Lady Jets basketball team (SGTC) split decisions in the Pete Arrington Thanksgiving Classic over the Thanksgiving Holidays at the Hanger.  They walked away with a 72 – 37 win over Motlow State College (MSC) and former assistant coach Kezia Conyers in the opener on Friday, but then dropped a 69 – 58 decision to the Daytona State College Falcons (DSC) on Saturday to drop to 6 – 3 overall this season.

“As expected coming into the season, we are going through some growing pains,” SGTC Lady Jets head coach James Frey said.  “I knew we would struggle at times, especially early playing 10 freshmen and unfortunately we have.  I still have a tremendous amount of confidence that as we go through these learning experiences and as the freshmen keep working and get some experience, we are going to be good. We just have to learn how to work consistently and have a desire to get better.  I am not sure we all have that desire. As the coach, it is my job to figure who does and coach that group up and keep it moving forward”, Frey continued.

The Lady Jets allowed MSC to score first in the match-up on Friday, but by the end of the first quarter South Georgia Technical College was up 19 – 11 over the Bucks and never looked back.  “Friday against Motlow State, we controlled the tempo and limited our turnovers,” Frey said.  “We were even able to fight through another bad shooting game and get a good win.”

Freshman shooting forward Alexia Dizeko from Switzerland led the Lady Jets in scoring with 13 points.  She and freshman shooting guard Cintia Lopez from Spain, were the only two players in double-digits.  Lopez had 10 points.

Following the big win over MSC, the Lady Jets fell to Daytona State College 69 – 58 on Saturday.  The unranked DSC Falcons are currently 5 -2 on the season.  They lost to the second ranked Chipola College team and Indian River before upsetting the 15th ranked Lady Jets.

“We struggled to score against Daytona State,” Frey said.  “We were 17 of 33 from the free throw line and 3 – 17 from the three.  We turned the ball over 11 times in the first half and got down by 17 at half-time.  We did a better job of controlling the glass and limiting turnovers in the second half and we were able to cut the lead to six but in the end, just not being able to score when we’re wide open has really hurt.” 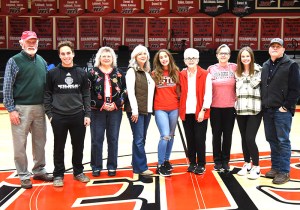 Freshman shooting forward Alexia Dizeko led the Lady Jets in scoring again for the second day of the tournament with 17 points and she was the top rebounder with 14.  Sophomore shooting guard Kamya Hollingshed was the only other Lady Jet in double-digits with 12 points.

The Lady Jets dropped to 6 – 3 on the season and are currently in third place in the GCAA with a 1 – 1 record.  They will travel to Albany on Wednesday, December 1st to face Albany Tech in a conference match-up at 5:30 p.m. and then host Chattahoochee Valley Community College at 1 p.m. on Saturday, December 4th.  After that, the Lady Jets will not play at home again un the Lady Jets Holiday Classic on December 28th, 29th, and 30th.  They will host Tallahassee Community College, Lawson State, and Gulf Coast.