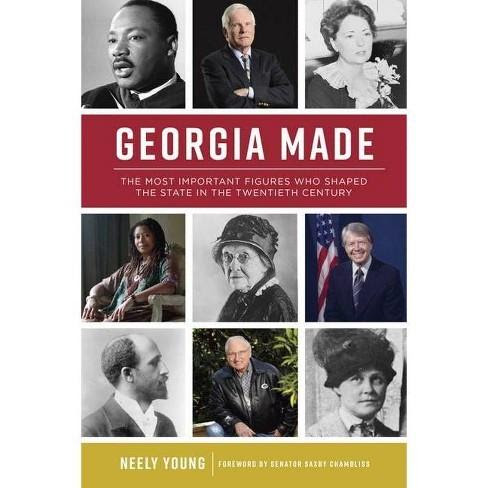 Georgia rose on the backs of great mean and women. Author and longtime journalist Neely Young has released Georgia Made – the Most Important Figures who Shaped the State in the Twentieth Century, a book that details the lives of these significant men and women who hauled Georgia up from its poor, agrarian roots, making it among the most diversified, prosperous states in the country.

The book, published on Oct. 25, 2021, is a continuation of Young’s long-standing interest in Georgia history and historical figures. They fought for freedom and served in the statehouse and White House. They excelled at sports, founded institutions that shaped countless lives and inspired through art and lives lived artfully. They are famous, obscure, colorful, outrageous and saintly, all with fascinating stories and all consequential, sometimes in ways felt the world over.

These individuals include Martin Luther King Jr., Jimmy Carter, Ted Turner, Alice Walker, Juliette Gordon Low, “Hammerin’ Hank” Aaron and Vince Dooley. Many here are no-brainers, while others may surprise. But all deserve recognition among the most influential Georgians of the twentieth century.

A native of Cedartown, Georgia, Young is a graduate of the University of Georgia and a proud journalist. In 1968, he joined his family-owned newspaper, the Valdosta Daily Times, working in the photography department.

After leaving Valdosta, he worked in various positions, and as both editor and publisher, for Georgia newspapers in Marietta, Canton, Dalton and Clayton County. In 1986, he became CEO of Morris Newspaper Corporation, which owned and operated 40 newspapers in six states.

He has served as a curator on the Georgia Historical Society and often wrote about historical figures in his columns for Georgia Trend magazine. Georgia Made is a continuation of Young’s long-standing interest in Georgia history and historical figures and a journey through the lives of these significant men and women.

Published by Arcadia Publishing and The History Press, Georgia Made includes a foreword by Senator Saxby Chambliss.