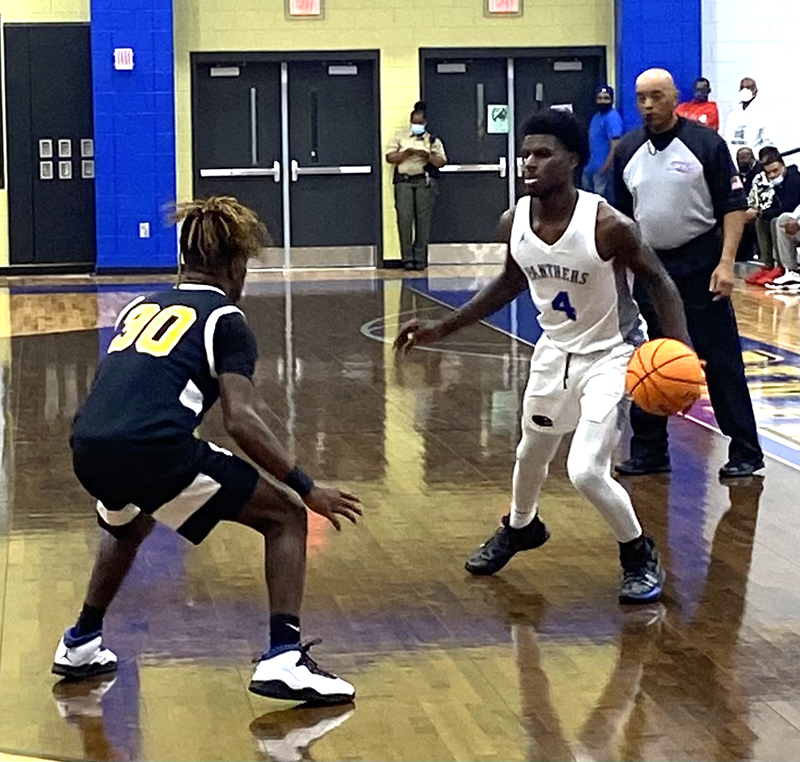 Sumter County junior guard Cameron Evans (#4) scored 22 points to lead the Panthers to a 91-81 double overtime victory over Peach County. Evans scored 10 of those 22 points during the overtime sessions. Photo by Ken Gustafson

AMERICUS – Saturday night’s Region 2-AAA contest between Sumter County (SCHS) and Peach County (PCHS) resembled that of a game being played for a region championship rather than one being played early in the season.  After four periods of play, the game between the Panthers and the Trojans was still undecided and it would take two more extra periods to decide a winner.
Fortunately for SCHS, junior guard Cameron Evans, who is also the quarterback on the SCHS football team, stepped up during the extra sessions, scoring 10 of his game total of 22 points in the overtime periods to lead the Panthers to a 91-81 double overtime victory over the Trojans on Saturday, December 4, at the Pitt Gymnasium on the new Sumter County High School campus.

“He stepped up right there in the overtime,” SCHS Head Coach Johnny Genwright said if Evans’ performance.  “I did let him know. I said ‘Hey, you’ve got to take over’. I had some guys in foul trouble. I had some guys that fouled out. I told him that he had been playing for a minute, so he had to step up and he did.”

Evans led the Panthers in scoring with 22 points and made 7 of 8 foul shots for the game.  Five if those made free throws came during the overtime periods.

In addition to Evans’ 22 points to lead the Panthers, both Kyric Davis and D.J. Hurley each poured in 21 points and Brandon Pope chipped in 12 for SCHS in the winning cause.

While he was pleased with the victory and knew that it was going to be a tough game against the Trojans, Genwright knows that his squad still has much work to do in learning how to take care of the basketball and playing solid defense without accumulating fouls.

“We had a lot of turnovers snd we gave away a lot of fouls and free throws to keep them in the game”, Genwright said. “We got to get more disciplined. We’ve got to get more disciplined on the defensive end and the offensive end and we’ve got to make shots.”
PCHS had three players score in double figures, but 62 of the Trojans’ 81 points came from Temarius Mathis and Jacory Brooks, who each poured in 31 points. Ladaria Leggett was also in double figures with 12 points. 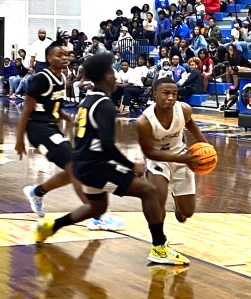 Both teams started out slow in the second quarter, but with 4:50 to go before halftime, D.J. Hurley hit a short jumper from the right side to bring the Panthers to within two at 18-16. However, shortly thereafter, SCHS guard Kyric Davis was whistled for both a shooting foul and a technical foul, which allowed the Trojans to score four straight points from the foul line. Being that they retained possession, PCHS got two more points when Mathis was fouled in the act of shooting and made both free throws. Because of the technical foul on Davis, what was a two-point deficit for the Panthers became a 24-16 deficit with 4:20 to go before halftime.

However, the Panthers responded by breaking the Trojans’ full-court press and getting a transition layup from Brandon Pope. A couple of minutes later, Elijah Westbrook was able to bring the Panthers back to within four at 26-22 on two made free throws. Then with 47.6 seconds left before halftime, Kevon Lewis drained two more foul shots to get SCHS to within three at 29-26. During the remaining seconds before halftime, both teams traded baskets, but the Panthers only trailed 33-31 at the half.

During the first half, the Panthers did a good job of getting back in the game by forcing turnovers with their pressure defense and making 10 of 14 free throws in the second quarter. However, they struggled to get defensive rebounds and allowed the Trojans to get numerous second-chance rebounds.

At halftime, Phyllis Lundy, who is retiring after 30 years of teaching at Sumter County High School, was honored before the crowd for her years of service.

The Panthers came out on fire to start the second half by going on a 6-0 run, but Mathis put a stop to the run by drilling a three-pointer, making the score 37-36 in favor of SCHS. Over the next couple of minutes, both teams struggled to score, but the Panthers took a 41-40 lead when Hurley scored on the inside. Then shortly thereafter, Kyric Davis got a steal and got the crowd to erupt when he finished off a one-handed dunk. Within just a few seconds, momentum had clearly shifted in favor of the Panthers and the SCHS faithful had become much more lively.

With 18 seconds to go in the third quarter, Hurley drilled a three-pointer to give the Panthers a 48-41 lead, but the Trojans responded when Mathis drained a three-pointer, setting the stage for an exciting fourth quarter to come.

Only seconds into the final stanza, the Panthers took a 50-44 lead when Devon Dowdell threw an ally-oop pass to Davis, who finished it with a two-handed slam. This caused the pro-SCHS crowd in the Pitt Gymnasium to roar with approval and it was the beginning of an 8-2 run by the Panthers.

However, the Trojans responded with a 6-0 run of their own, forcing Genwright to call a timeout with 4:25 to play in the game.

Out of the timeout, the Trojans scored a basket, but Hurley responded with another three-pointer to put the Panthers up 61-54. Over the next couple of minutes, both teams traded baskets, but SCHS still maintained a 65-60 lead with 2:02 to play.

During this period of the game, the Panthers had to deal with a relentless full-court press by the Trojans, but for the most part, they were able to break that press and score some points.

However, with a little over a minute to go in regulation, the Trojans would not go away, as Jacory Brooks drilled a three-pointer to bring PCHS to within three points at 67-64. Then with 48.3 seconds to go, Brooks brought the Trojans to within one point on two made free throws. 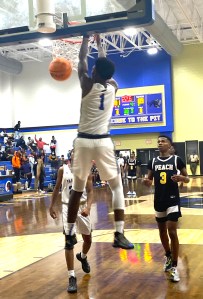 Sumter County senior guard Kyric Davis finishes off one off a slam dunk to seal the double overtime victory for the Panthers. Davis scored 21 points to help lead SCHS to victory.
Photo by Ken Gustafson

On their next possession, the Panthers tired to run some clock against the swarming defense of the Trojans. They were able to get the ball to Elijah Westbrook, who was fouled. However, Westbrook was only able to make one of the two foul shots and the Trojans tied the game at 68-68 when Mathis scored a layup on the inside. With about 12 seconds left, the Panthers threw the ball past half court, but the ball was intercepted by PCHS. Fortunately for SCHS, they were able to get a stop to send the game into overtime.

Early in the overtime period, both teams traded baskets, but Cameron Evans was able to drain a three-pointer to give the Panthers a 73-71 lead. However, PCHS tied the game when they forced a turnover and Brooks scored on a layup. Then with 1:48 to play in the overtime period, Brooks struck again when he scored another transition basket. Devon Dowdell had a chance to tie the game at the foul line, but missed the front end of a one-and one. Fortunately for the Panthers, they were able to tie the game at 75-75 by forcing a turnover and getting a layup from Westbrook.

Then with 49.4 seconds left, SCHS took a one-point lead when Davis made one of two foul shots.

The Trojans had a chance to regain the lead when Ladaria Leggett was fouled while shooting, but Leggett missed both foul shots. The Panthers then pushed the ball the other way and Davis was able to get fouled. However, he could only make one of the two foul shots and it gave the Trojans one last chance to tie the game and send it into a second overtime. With about 10 seconds left, Leggett was able to make amends for his two missed foul shots when he tied the game at 77-77 on a short jumper. The Panthers had one last chance to win the game at the buzzer, but the shot came after the horn sounded and was off the mark, meaning that a second 4:00 overtime period needed to be played to decide a winner. 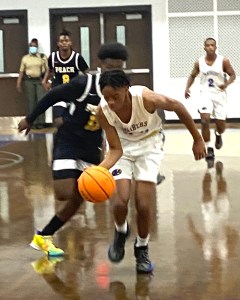 Sumter County senior guard Brandon Pope pushes the ball up the court against Peach County. Pope scored 12 points in the win over the Trojans.
Photo by Ken Gustafson

Just 30 seconds into the second overtime, Evans was fouled and made both free throws to give SCHS a 79-77 lead. Shortly thereafter, Evans came through again with a short jumper and the Panthers went up by four. Then with 2:16 to go, Evans was fouled again and made two more foul shots to give SCHS an 83-77 lead. This was the beginning of a 9-3 run by the Panthers, but the Trojans were still very much alive at this point, as they trailed 86-81 with 1:18 left to play.

However, the Panthers were finally able to close the door in the second overtime. They were able to get the stops on the defensive end and went on a 5-0 run that was capped off by a two-handed slam by Davis. After four periods of play and two overtime periods, the Panthers prevailed 91-81.

SCHS is now 3-1 on the season and 2-0 in the Region 2-AAA standings. The Panthers will try to continue their winning ways when they travel to Thomaston on Tuesday, December 7, to take on region opponent Upson-Lee. Tip-off for that game is scheduled for 7:30 p.m.