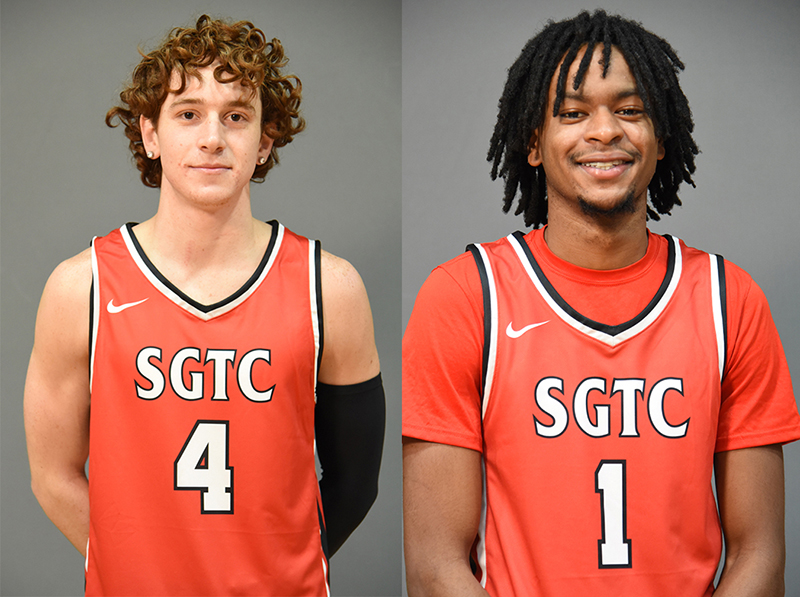 Will Johnston (4) and Malik Battle (1) were the top scorers for the Jets in the Chipola Classic this past weekend. Photo by Su Ann Bird

MARIANNA, FL – The trips to Florida have been tough for the South Georgia Technical College Jets and they find themselves facing another trip this weekend.  The Jets dropped a narrow 75 – 71 loss to Gulf Coast State College in the opening game of the Chipola Classic on Friday and then suffered a 98 – 81 loss to third ranked Chipola on Saturday.  This was the fifth straight loss for the Jets in back-to-back Florida tournaments over the past 10 days.

“We are playing one of the toughest schedules in the country right now,” said SGTC Jets head coach Chris Ballauer.  “Over the past two weeks, we have played five nationally ranked teams or teams receiving votes to be nationally ranked.  We played a fourth, ninth, and third place team as well as two other teams that received votes to be included in the national ranking.  Two of the losses were by less than five points, but this has been tough.”

Coach Ballauer added that his team is struggling.  “We are facing adversity right now.  As coaches, we are pressing to find answers and players are pressing to make plays that will help us win.  We just haven’t had any luck in having both coming together,” said Ballauer.  “But playing this type of schedule prepares us for the conference.”

The Jets are still 6 – 5 overall and received votes to be included in the National Junior College Athletic Association (NJCAA) national rankings.  They will not open their conference season until January 2022.

In the opening game of the Chipola Classic the Jets were down 36 – 34 at the end of the first half and Gulf Coast was able to expand that lead to 75 – 71 in the second half by outscoring the Jets 39 – 37 in the final 20-minutes.

The Jets only hit 38.5% of their shots from the field and were five of 29 from the three-point line.  They did make two out three of their 24 free throw attempts.

Sophomore Will Johnston led the team in scoring against Gulf Coast with 17 points.  Marvin McGhee, III, was close behind with 16 points and sophomore forward Jalen Reynolds was the only other player in double digits with 13 points.  Reynolds also had 11 rebounds.  Will Johnston had nine rebounds and six assists and Marvin McGhee had nine rebounds and three assists along with a steal.

Freshman Nathan Wilson came off the bench to add eight points for the Jets.  He was followed by Sophomore Matija Milivojevic with 7, Kalllin Fonesca with 5, Malik Battle, 3, and Justice Hayes with 2.

The Jets came back on Saturday and played a tremendous first half against the 3rd ranked Chipola squad.  The Jets were up 46 – 45 at the end of the first twenty minutes but then Chipola came out in the second half to outscore SGTC 54 – 35 and take the 99 – 81 victory.

Sophomore guard Malik Battle came off the bench to led the Jets in scoring in that match-up.  He had 21 points, three assists, one steal and one rebound.  Will Johnston was close behind with 19 points, six rebounds, one steal and two rebounds.   Marvin McGhee, III, was the only other Jet in double digits with 16 points.

The Jets will travel to Florida for the third straight week to play in the Gulf Coast Classic in Panama City, FL.  They open with Gulf Coast on Friday at 7:30 p.m. CST, and then follow up with 22nd ranked Florida Southwestern State College at 4 p.m. CST on December 10th.  The Jets return home on December 15th for a 7 p.m. game with Chattahoochee Valley Community College to close out 2021.