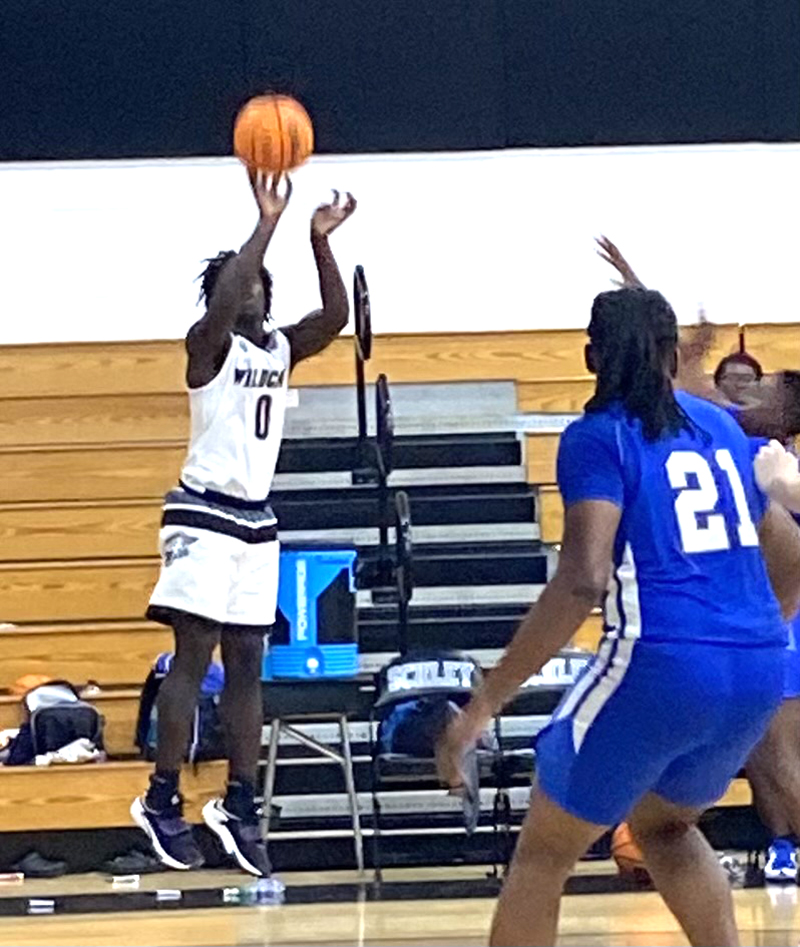 Schley County sophomore guard JaLewis Solomon is about to knock down a three-pointer. Solomon scored 21 points to lead the Wildcats to victory over Stewart County. Photo by Ken Gustafson

ELLAVILLE – The Schley County Wildcats (2-2) went on an 11-3 run in the first quarter and ended up putting a strangle hold on the game from then on out, as they went on to a decisive 70-47 victory over the Stewart County Royal Knights on Tuesday, December 7, at Schley County High School.

This was a game in which the Wildcats used their full-court and half-court defensive pressure early to force turnovers and they were able to score points off those turnovers. However, though Schley County was able to use its defense to create its offense, the Wildcats struggled themselves with taking care of the basketball and, at times, had some breakdowns on defense. This is cause for concern for Schley County Head Coach Ernest Scott.

“We still had too many turnovers and playing top teams in the region, having 27 turnovers is not going to get it done,” Scott said. “We’ve got to clean that up and we’ve got to get better defensively. That is going to be the focus going forward.”

Schley County sophomore guard JaLewis Solomon led all scorers with 21 points and Zayen Walker poured in 13. Trypp Lumpkin, Jordan Hudson and Bryce Blalock each had seven points and Clinton Jackson had six in the winning cause. 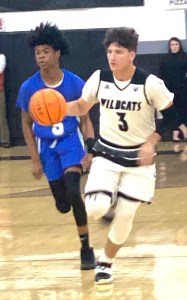 The Wildcats quickly jumped out to a 6-0 lead by using full-court pressure to turn turnovers into points in transition. This prompted Stewart County to call a timeout early in the first quarter.

Out of the timeout, the Royal Knights outscored the Wildcats 7-6 over the next couple of minutes, but Schley County responded with an 11-3 run that was keyed partly by the outside shooting of Solomon, who knocked down two three-pointers during that stretch. 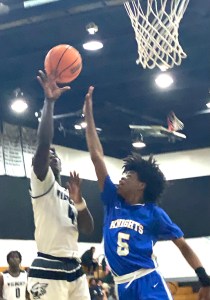 Schley County freshman forward Zayden Walker scores on the inside. Walker scored 13 points in the win over Stewart County.
Photo by Ken Gustafson

Over the first two minutes of the second quarter, the Wildcats were able to increase their lead to 27-11 and they were able to do it by getting the ball down low to Bryce Blalock, who scored two layups on the inside. That prompted another timeout by the Royal Knights, but it didn’t stop the Wildcats from maintaining control of the game. The scoring was somewhat evenly matched during the remainder of the first half, but Schley County would go into halftime with a commanding 37-18 lead.

Solomon scored 18 of his game-high 21 points in the first half to lead the Wildcats’ attack.

During the third quarter, the scoring between the two teams was fairly even, but the Royal Knights were unable to significantly cut into their deficit. This was partly due to the defense of the Wildcats, but also due to the inability of the Royal Knights to score during this stretch. Stewart County also struggled in taking care of the basketball and it negated opportunities for them to cut into the Wildcats’ lead. By the start of the fourth quarter, Schley County had a 51-33 lead.

Schley County freshman forward Jordan Hudson scores on the inside for the Wildcats. Hudson chipped in seven points in the Wildcats’ win.
Photo by Ken Gustafson

Early in the fourth quarter, the Royal Knights used full-court pressure to try and create turnovers and score off those turnovers. While they were successful once in a while, they weren’t able to make any serious run against the Wildcats. As a result, Schley County was able to maintain control the rest of the way and went on to win by the score of 70-47.

Timothy Daniel led the Royal Knights (0-5) in scoring with 17 points.

The Wildcats will try to build on their success when they travel to Talbotton, GA on Friday, December 10, to take on region opponent Central (Talbotton). Tip-off for that game is scheduled for 7:30 p.m.