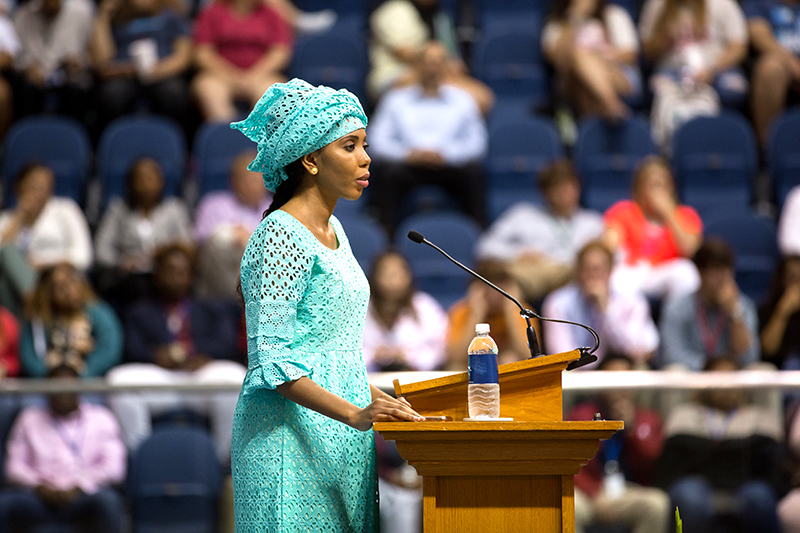 By Chelsea Collins, GSW Director of Marketing and Communications

Dukureh earned her bachelor’s degree in business administration and management online at GSW in 2013, and went on to establish herself as an international leader and change maker.

Born in The Gambia in 1989, her arranged marriage to an unknown older man at age 15 brought her to New York City. After two months, she was able to get away from her abusive husband, continued her education and became a naturalized U.S. citizen in 2015.

In 2018, she was nominated for the prestigious Nobel Peace Prize for her work towards ending female genital mutilation (FGM) and child marriage in her home country of The Gambia in West Africa and across the world. Dukureh was herself a victim of FGM at just one week old.

She is the CEO and founder of the non-profit organization Safe Hands for Girls, which provides support for survivors of FGM and advocates for an end to FGM practices. She was the subject of a 2017 feature documentary, “Jaha’s Promise,” which details her life and work to end FGM.

She was appointed the first-ever UN Women Ambassador for Africa, awarded the Eleanor Roosevelt Medal of Honor, and recognized as one of Time’s 100 most influential people in the world. She is an honoree of L’Oréal Paris’s Women of Worth program, and received the Visionary Award at GSW’s 2021 Outstanding Alumni Awards.

Dukureh recently ran for president of The Gambia and is currently focused on scaling an African-led Big Sisters Movement, which aims to end FGM and child marriage by 2030.

On Dec. 16, GSW will recognize Dukureh’s accomplishments once more by naming Room 203 in GSW’s Business, History and Political Science Building after her in a ribbon cutting ceremony.

Doors to the inside of the Convocation Hall will close five minutes before each ceremony so guests should plan accordingly for parking and finding seats. Accessible parking and seating will be available.

Each ceremony will be live-streamed on GSW’s YouTube channel to help Hurricanes everywhere celebrate these graduates’ academic milestones. Family and friends can watch at www.youtube.com/GeorgiaSouthwestern.

There are no guest restrictions in place for the Fall 2021 ceremonies. Face masks are encouraged for those who have not been vaccinated but are not required.

Please visit www.gsw.edu/graduation for more information on GSW’s commencement ceremonies, including directions on where to park.