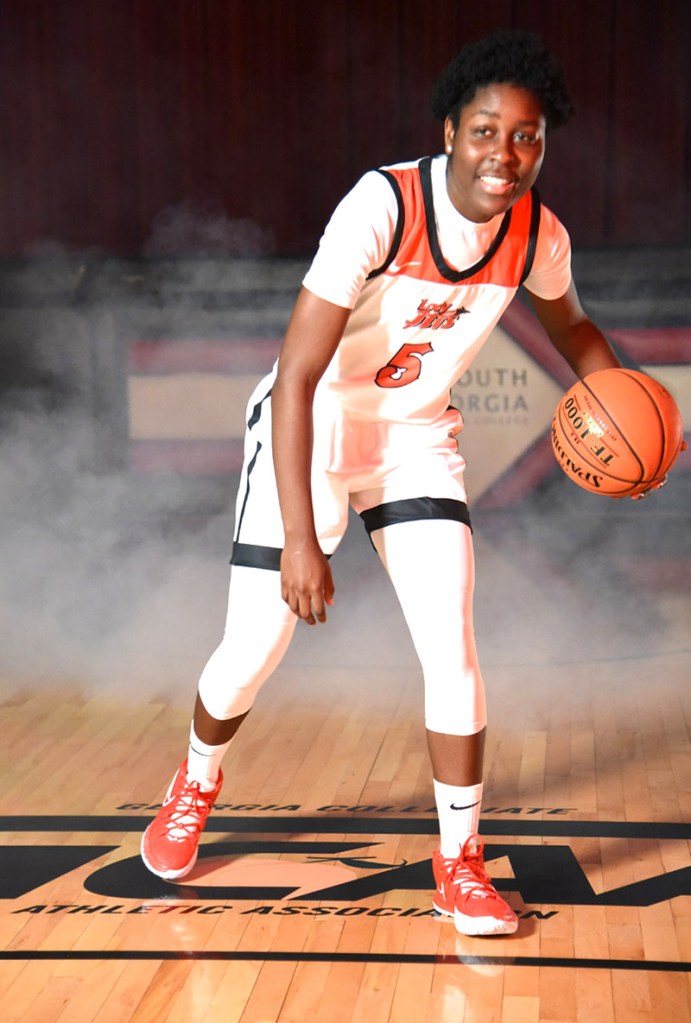 CUTHBERT, GA – The 16th nationally ranked South Georgia Technical College Lady Jets moved to 11 – 3 overall and 4 – 1 in the Georgia Collegiate Athletic Association (GCAA) with an impressive 60 – 43 win over Andrew College in Cuthbert, GA.  This was their fifth consecutive win.

“It was good to go over to Cuthbert and get a win,” said SGTC Lady Jets head coach James Frey.  “That’s a very difficult gym to play in if you’ve never been in it and Andrew plays very good at home.”

“I think our defensive intensity was fantastic.  There is an odd saying that defense travels.  That means you are going to have off nights offensively on the road but your defense should be consistent,” Frey said.  “I thought our defensive intensity, positioning off the ball, and our ability to recover last night was as good as it’s been all year.  Andrew has the leading scorer in our conference and freshman Alexia Dizeko guarded her all nine and held her to nine points.  In the two games against us, she has only scored three and nine points so I love the way we have stepped up to the challenge.”

Coach Frey is still not satisfied with his offense.  “Offensively we continue to turn the ball over too much.  That is something that we continue to focus on and will continue to work on.  Shots were not falling for us last night but we played really hard and found a way to win.  Fanta Gassama has been playing great for us the past few weeks but she was out last night after injuring her knee in practice.  Right now, she is day to day.”

In addition to her strong defensive efforts, freshman Alexia Dizeko also led the Lady Jets in scoring with 21 points.  Sophomore Kamya Hollingshed was the only other Lady Jet in double figures and she had 10 points.  Luana Leite scored nine points and had seven rebounds and sophomore Maikya Simmons had eight points and six rebounds, 10 assists and two steals.  Closing out the scoring for SGTC was Camryn James with 4, Cintia Lopez with three, Loes Rozing and Laurie Calixte with two each and Susana Posada with one.

The Lady Jets will now travel to Rome on Saturday December 18th for a conference rematch with the nationally ranked Georgia Highlands team and former Lady Jets coach Brandon Harrell.  Tip-off is 2 p.m.

“We have a mountain of a challenge ahead of us on Saturday.  Going to Rome and playing the 7th best team in the country is what makes our conference so special,” said Coach Frey.  “Games like this.  Georgia Highlands is incredibly talented and they are playing even better now than when we played them early.  For us to have a chance to win the regular season championship we MUST win Saturday.  They average around 90 points a game and have six or seven third year sophomores.  There is absolutely no substitute for experience.  This should be a really fun game and I know our team is looking forward to the trip.”

The Lady Jets open on Tuesday, December 28th at 1 p.m. against Tallahassee Community College.  Georgia Highlands and Gulf Coast play at 3 p.m. followed by Chattahoochee Valley and St. Petersburg at 5 p.m.  Eastern Florida will take on Lawson State at 7 p.m.

On Wednesday, December 29th.  Chattahoochee Valley opens with Tallahassee at 1 p.m.  Eastern Florida plays Georgia Highlands at 3 p.m., Gulf Coast and St. Petersburg College face off at 5 p.m. and the Lady Jets close out the night with Lawson State at 7 p.m.

The tournament ends on Thursday, December 30th.  The games start at 10 a.m. with Eastern Florida and Chattahoochee Valley and then at 12 noon, St. Petersburg will play Lawson State.  Tallahassee Community College and Georgia Highlands match-up at 2 p.m. and the Lady Jets will close out the tournament with a game against Gulf Coast at 4 p.m.

“Our Lady Jets Holiday Classic has become one of the premier junior college women’s events.  We have eight teams including four ranked in the top 25 in the country.  There will be four games a day for three days in the Hangar and it will be high level college basketball,” said Frey.