Americus Mayor and City Council finish out the year with flair 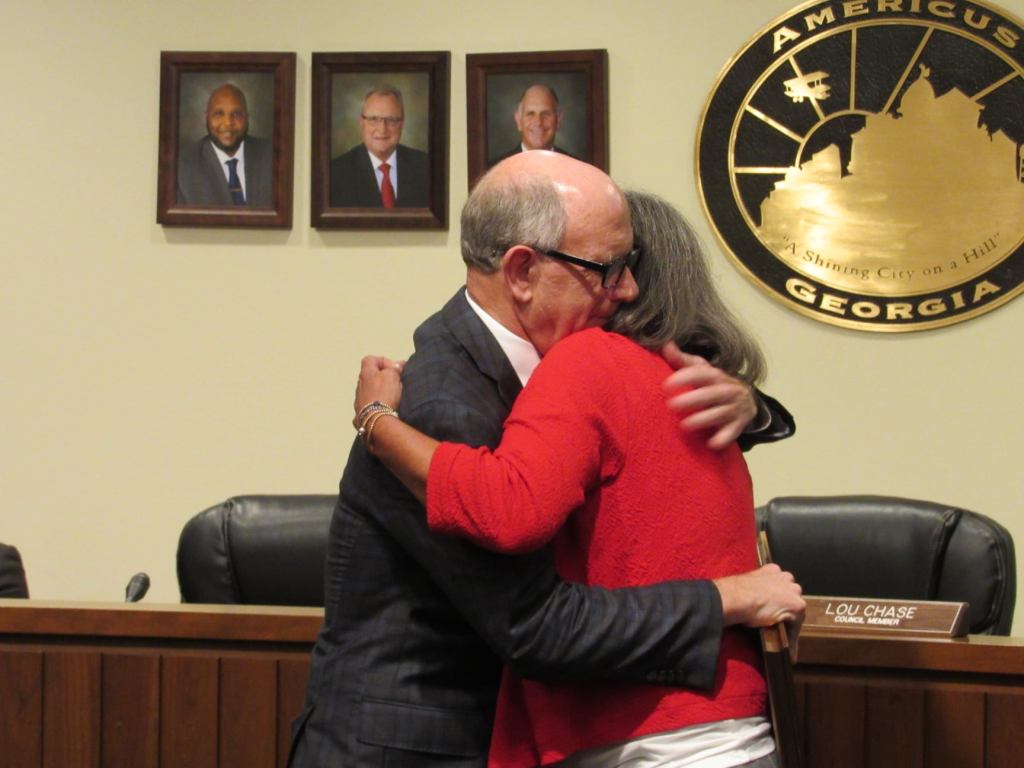 City council finished up the business of the year by voting unanimously on the agenda items. Of these items the consent agenda, the budget, ordinances regarding the budget, contracts for next year’s services, and alcohol renewal licenses where approved. Kelvin Pless was also voted in as the Mayor Pro tempore and will serve in Lee Kinnamon’s lieu should he not be able to attend a meeting.  Marcus Johnson was appointed to the tourism council.

The majority of the meeting was rich in acknowledging both newly elected officials as well as those who did not seek re-election. City Clerk, Paula Martin read the election results into record, and variety of judges swore in the different representatives. Mike Greene swore Lee Kinnamon in for his first term as mayor. Rucker Smith swore in a re-elected Charles Christmas for a new term, Crystal Cleveland swore in a re-elected Kelvin Pless for his next term, and Mike Greene swore in Nicole Smith for her first term. All the newly sworn in officers will take their seat on January 1, 2022.

The council then recognized the service of Barry Blount as mayor and Lou Chase as council woman. Both Barry and Lou entered office at the same time and have served for the last 16 years. Both were acknowledged with proclamations as well as a key to the city. The council presented them with framed GPS style maps of the city and their iPad which they used for city business. Both expressed their gratitude to their fellow council members as well as to the residents who trusted their leadership. Memories which mark the city’s bravery, unique offerings and resiliency where highlighted. Barry and Lou have provided solid leadership throughout their 16 years and Americus will continue to benefit from their service in other areas not limited to municipal government. Both expressed high hopes for the future and report they will not change their approach in cheering for our city.

This was the first face to face meeting held in 20 months, as the meetings have been held via Zoom secondary to COVID-19. For the 2022 class of representatives, Juanita Wilson will serve as the senior council member. The Americus City Council will comprise of Mayor Lee Kinnamon, Juanita Wilson, Nelson Brown, Daryl Dowdell, Kelvin Pless, Charles Christmas and Nicole Smith. Diadra Powell will continue to serve in her role as city manager, Paula Martin will remain the city clerk, and Jimmy Skipper will continue as the city’s attorney.

As Barry’s final act as mayor, he once again hit the gavel to pronounce the meeting adjourned. The Americus Times Recorder is grateful to Barry and Lou for being the face of Americus on the residents’ behalf over the past 16 years. It is a service which requires a heart for our home and a bravery to hold tight to a hopeful vision for our future. Barry and Lou have finished the race well, and we as residents are indeed the winners for having their watchful eye, listening ear, brave voices and compassionate hearts. We stand on many shoulders to be “The Shining City on the Hill.” No doubt, Barry and Lou will be counted proudly among those shoulders. For their gifts and generosity, we are better.