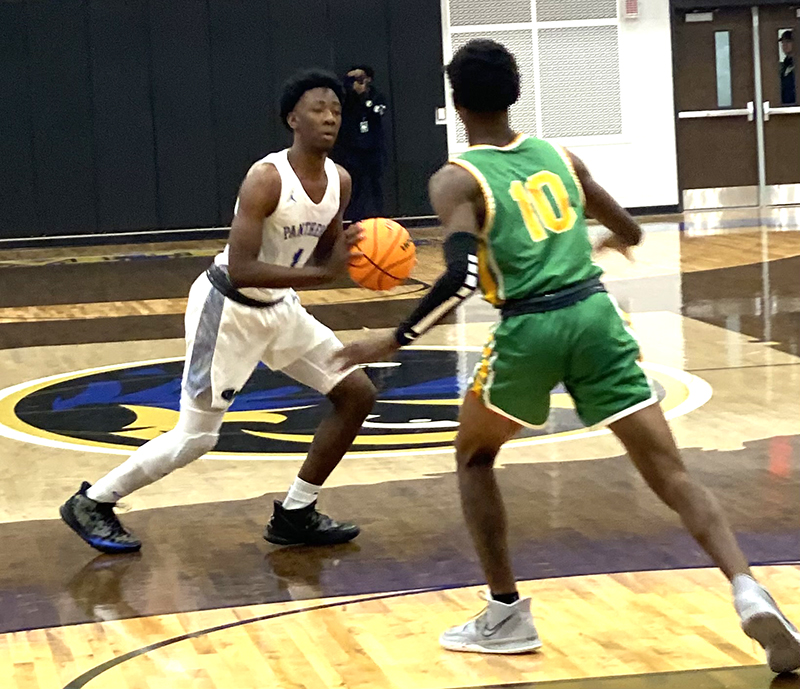 Sumter County senior small forward Kyric Davis (1) scored the go-ahead basket on a tip-in in overtime and made at least two critical blocked shots during regulation to help lead the Panthers to a 67-63 overtime victory over Monroe. Photo by Ken Gustafson

AMERICUS – Friday’s varsity boys’ basketball game between the Sumter County Panthers (SCHS) and the Monroe Golden Tornados (MHS) featured two teams that were once rivals in the same region. It also featured a pupil going up against his former teacher. On Friday, December 17, SCHS Head Coach Johnny Genwright matched wits against his former mentor, former SCHS and current MHS Head Coach Michael Hoffpauir, in a back-and-forth battle that could not be decided in 32 minutes. At the end of regulation, the score was tied at 57-57, but with less than a minute to play in the OT period, SCHS senior small forward Kyric Davis tipped in a missed shot by Brandon Pope that would put the Panthers ahead for good. Pope then scored an insurance basket with seven seconds left and the Panthers ended up edging out the Golden Tornados 67-63 in an overtime thriller at the Pitt Gymnasium on the new Sumter County High School campus.

In addition to his production on offense, Davis, who scored 13 points in the contest, came up with at least two blocked shots in the second half that ended up leading to five points scored by the Panthers. However, the Panthers’ scoring leader on this night was junior shooting guard Brandon Pope. Pope led all scorers with 25 points and went 6 for 8 from the free throw line. Junior guard Cameron Evans was also in double figures with 11 points and junior point guard D.J. Hurley chipped in seven in the winning cause. 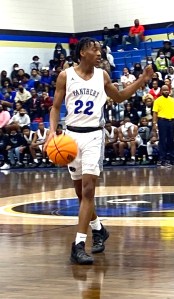 The Panthers were down 2-1 early in the game, but Hurley drilled a three-pointer, was fouled on the play and made the foul shot to give SCHS a 5-2 lead. Shortly thereafter, Pope drained a shot from beyond the arc and the Panthers would eventually have a 10-2 lead before the Golden Tornados would outscore SCHS 5-4 over the next couple of minutes.

By the 7:23 mark of the second quarter, MHS had cut the Panthers’ lead to 18-14, but Andrico Jackson brought the Golden Tornados to within one point on a three-pointer. Over the next minute or so, both teams traded baskets, but MHS guard Lavasky Mapp would give the Golden Tornados a 23-20 lead on a three-pointer with a little over three minutes left in the first half. The Panthers tried to fight back to regain the lead, but went into halftime trailing MHS 26-22.

With only 1:27 having gone in the third quarter, MHS was able to jump out to a 30-23 lead and capped off that run with a fast break basket by Mapp. However, the Panthers went on a 6-1 run that was capped off with a fast break basket from Pope. During this run, SCHS took advantage of cold shooting from MHS and they turned up their defensive pressure, thus forcing turnovers. However, just as quick as the Panthers had gotten back in the game, the Golden Tornados would be just as quick to go on a 10-4 run and take a 41-33 lead. 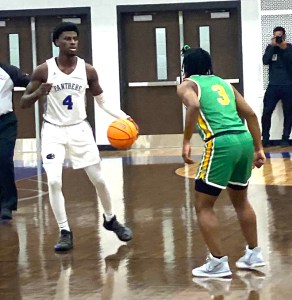 Fortunately for the Panthers, they were able to counter that run by going on another 6-1 run of their own to close out the third quarter. With just seconds remaining in the third, SCHS got a steal and Pope was able to score to bring the Panthers to within three at 42-39 with one more quarter to play.

Over the first three minutes of the fourth quarter, the momentum began to swing heavily in favor of the Panthers. On the defensive end, Davis came up with two blocked shots that resulted in five straight points for SCHS. After the second of his two blocked shots, Cameron Evans was able to score a transition basket and was fouled on the play. He made the free throw to complete the three-point play and the Panthers had a 48-45 lead.

However, with 2:44 to go in regulation and SCHS leading 50-47, Jackson drained a three-pointer for MHS to tie the game at 50-50. As one might expect, this game was going to go down to the wire and would be decided in either the waning seconds of regulation or in overtime. 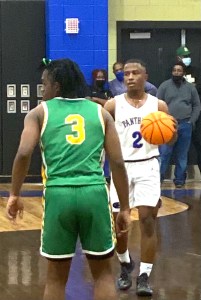 With a little over a minute to play, Pope was able to give the Panthers a 52-50 lead, but MHS tied the game again on two made free throws by Justin Burns. Kyric Davis responded for the Panthers with a basket and a free throw to give SCHS a three-point lead, but the Golden Tornados scored a basket to cut their deficit to one at 55-54.

With 22 seconds left to play in regulation, SCHS sophomore guard Anthony Tyson was fouled and had a chance to give the Panthers a three-point lead, but he missed both free throws. This allowed the Golden Tornados to take a 57-55 lead on a three-pointer by Mapp from the right corner with 9.5 seconds left. The Panthers would have exactly 9.5 seconds to either tie or win the game.

SCHS tried a long in-bounds pass that was stolen by MHS, but the player caught the ball with his foot out of bounds, giving the Panthers a lucky break and a chance to tie or take the lead with 7.1 seconds left.

After Genwright called a timeout, Hurley inbounded the ball to Pope, who was able to score on the inside, tying the game at 57-57. The Golden Tornadoes could not get a game-winning basket in the final seconds and the game would have to be decided in overtime. 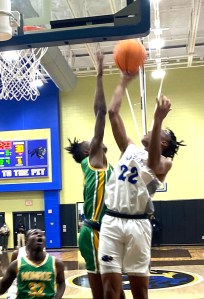 Early in the overtime period, the Panthers jumped out to a 60-57 lead and would later take a 62-59 lead with 3:06 left in OT when Pope was fouled and hit two foul shots. The Golden Tornados couldn’t score at the other end and Davis would get the ball and get fouled. Davis made one of the two foul shots, but MHS scored four straight points to tie the game at 63-63.

With 1:07 left in OT, MHS had the ball, but the Panthers forced a turnover and took the lead when Davis was there to tip in a missed shot by Pope. Shortly thereafter, SCHS forced another turnover and Pope scored the insurance basket on a fast break layup to secure the hard-fought 67-63 overtime victory for the Panthers.

With the win, SCHS improves its overall record to 7-1 and 4-0 in Region 2-AAA competition. As for MHS, Hoffpauir’s Golden Tornados suffered their first loss of the season and are now 5-1. Dominic Henderson led MHS in scoring with 18 points and Andrico Jackson poured in 13 in the losing cause.

The Panthers will now set their sights on Marietta High School in Marietta, GA, where they will compete in the Lemon Street Classic December 18-21. Their first game of the tournament will be against the Bengals of Blythewood High School from Blythewood, South Carolina on Saturday, December 18, at 2:45 p.m.