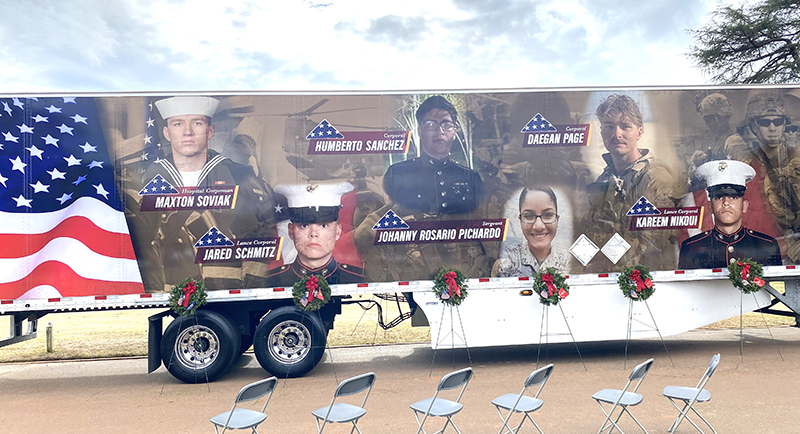 ANDERSONVILLE, GA – Approximately 300 to 500 people ground all over the state of Georgia and around the Southeast gathered at Andersonville National Cemetery on a warm, spring-like Saturday afternoon, December 18, to honor the 20,300 fallen veterans buried in the cemetery by laying wreathes on each tombstone and to take part in a special ceremony to honor these fallen heroes. The event is put on annually by Wreaths Across America: an organization dedicated to honoring fallen veterans by annually setting aside a Saturday to lay Wreaths on all of the tombstones at every military cemetery across the country.

This year’s event was particularly special because a total of 20,313 wreaths were brought down to Andersonville. Those 13 extra wreathes were laid in honor of the 13 American Service Members who were killed in Afghanistan this year shortly before the full withdraw of U.S. Armed Forces from that country. 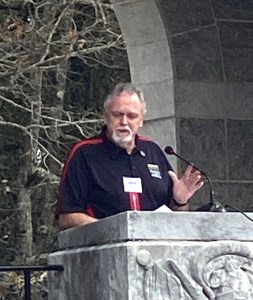 Lee Gentry, Vice President of the Bennett Family of Companies, was one of the speakers at the Wreaths Across America event at Andersonville National Cemetery. Gentry started out his speech by saying that the occasion is being done to “remember, honor and teach.”
Photo by Ken Gustafson

Lee Gentry, Executive Vice President of the Bennett Family of Companies, summed up the reason for gathering at Andersonville National Cemetery for this special and somber occasion. “This is about remember, honor and teach,” Gentry told the crowd. “This morning, we had the Junior ROTC from Jackson, GA: young men preparing for one day hopefully to serve this great country. I don’t know about you, but I think they deserve a round of applause.” Gentry was referring to the Junior ROTC Color Guard from Jackson High School in Jackson, GA, who were there to lead the playing of the national anthem at the beginning of the ceremony.

The Bennett Family of Companies is a transportation company based in McDonough, GA and they coordinated the transportation of all of the wreaths to military cemeteries around the country, including Andersonville National Cemetery, so that people would be able to lay wreaths on the millions of tombstones of America’s fallen heroes. At the same time the ceremony was going on at Andersonville National Cemetery, similar Wreaths Across America ceremonies were taking place at military cemeteries all over the country. “We are all very humbled and blessed to be here today to remember and honor and teach,” Gentry told the crowd. He added that the thousands of wreaths that were brought to the cemetery came with the gracious support and giving of many sponsors, such as the Bennett Family of Companies and the Taylor Family Foundation, which was started by Bennett Family of Companies CEO Marcia Taylor. According to information on the foundation’s website: www.thetaylorfoundation.org, the Taylor Family Foundation “supports and provides grants geared towards family values, senior citizens care and community initiatives.” 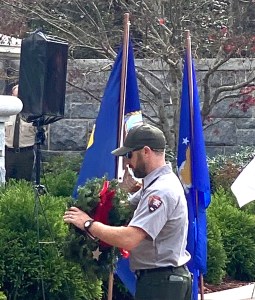 Casey Battle, a Marine Corps Veteran and Maintenance Supervisor at the Andersonville National Historic Site, proudly presents a wreath in honor of those who have served and who are still serving in the United States Marine Corps.
Photo by Ken Gustafson

Gentry took time to thank the “rolling ambassadors”, volunteers living in Maine who took the time to go to Columbia, ME to pick up the wreaths that would eventually be brought to Andersonville to be placed on the graves. He also went on to thank the many sponsors and individuals who gave of their time and talents to make this annual Wreaths Across America event possible. 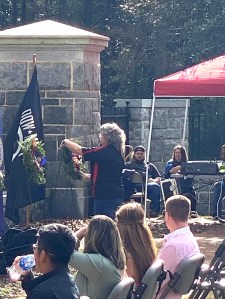 Donna Padgett, Bennett Motor Express Director of Financial Planning and Analysis, proudly presents a wreath to remember those who are Missing in Action (MIA) and those who are Prisoners of War, especially in honor of her uncle, Marine Corps Gunnery Sergeant James Wesley Jackson Jr., who is missing in action from the Vietnam War.
Photo by Ken Gustafson

“For those of us who work here every day, to see this happen, really, there are no words,” Wagner told the crowd. “To have a wreath on every headstone is something. Thank you to everyone that has helped make this dream a reality. The ongoing pandemic has caused many of us to take a fresh look at our priorities, about what’s important and what are we leaving behind. For the 20,300 men and women resting here at Andersonville, their legacy is one of service and sacrifice for their country. Their legacy is our freedom. To those of you who have served, or are now serving in the military, thank you so very much for your service,” Wagner continued. 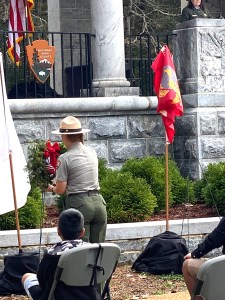 U.S. Army Cpt. Caitlyn Edwards, an Army Reservist and Anderson National Historic Site Lead Park Ranger, proudly presents a wreath in honor of those who have served and who are still serving in the United States Army.
Photo by Ken Gustafson

As the ceremony continued, a wreath was laid in front of the speaker’s rostrum in honor of service members from each branch of the U.S. Armed Forces, Prisoners of War and those missing in action.

After the names were red, Taps, the National Song of Remembrance, was played to honor these fallen heroes. 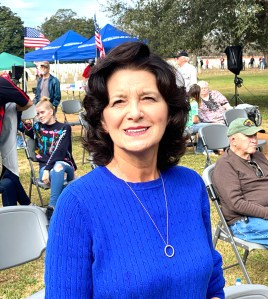 Beverly Cartwright came down from Kathleen, GA to witness the ceremony and to take part in the laying of the wreaths. Her husband, Tech Sergeant Donald Cartwright, served in the Air National Guard and is buried in Andersonville National Cemetery. “I come down here to Andersonville for all their programs and I’m so thankful that there’s a beautiful place to come and be able to enjoy this patriotic program,” Mrs. Cartwright said. “So I’m always very thankful for that.”

According to Mrs. Cartwright, Donald Cartwright served in the Air Force for four years in the late 1960s. After leaving the Air Force, he joined the Air National Guard a few years later and would later retire from that branch of service. 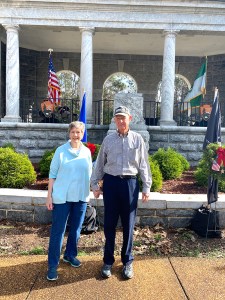 Retired Air Force Veteran John Wolfe and his wife Gail came up from Albany, GA for the Wreaths Across America event. Gail Wolfe is a member of the Thronateeska Chapter of the Daughters of the American Revolution (DAR).
Photo by Ken Gustafson

John and Gail Wolfe, who live in Albany, GA, came up to Andersonville to take in the ceremony and lay wreaths on the tombstones. Gail Wolfe is a member of the Thronateeska Chapter of the Daughters of the American Revolution (DAR) and John Wolfe is a retired Air Force veteran.

“I am in awe of the people who gave their lives for our freedoms. Thanks be to God for all the people who have been willing to do that for us from the beginning of the Revolution to the present time and probably into the future,” Gail Wolfe said. “I just feel like this is a way to honor them and thank them for their service. They weren’t always thanked.” 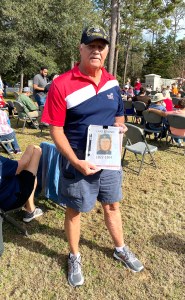 This is Retired U.S. Army Sergeant First Class Warren Grund. Sgt. First Class Grund was at the Wreaths Across America event to pay honor to his brother, U.S. Army Helicopter Pilot Kenneth Grund and his Great Great Grandfather, Private Lars Grund. Both are buried at Andersonville National Cemetery. Kenneth Grund fought in both the Vietnam War and in Iraq and Private Lars Grund fought in the Civil War with the Wisconsin 15th Infantry.
Photo by Ken Gustafson

Many came to Andersonville from not just other parts Georgia, but from other parts of the country as well. One of those was Retired U.S. Army Sergeant First Class Warren Grund, who came from his home in Ocala, FL to attend the event. Sgt. First Class Grund has two relatives buried in Andersonville National Cemetery. His Great Great Grandfather, Private Lars Grund, fought in the Civil War in the Wisconsin 15th Infantry and died in Andersonville. His brother, Kenneth Grund, was a U.S. Army Helicopter Pilot who fought in the Vietnam War and also fought in Iraq. According to Sgt. First Class Grund, Kenneth Grund came home and was eight days from retiring from the Service when he died of a heart attack. 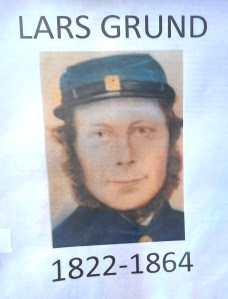 For Sgt. First Class Grund, being at the ceremony to honor his brother, his Great Great Grandfather and all of those who have given their lives, as well as those like himself who are retired and those who are currently serving, it meant a lot to him to not only honor his relatives, but all of the other veterans who have passed on.

Another American Service Member who came to Andersonville to honor America’s fallen heroes was U.S. Army Sergeant Sonya Wilson. Sgt. Wilson, who is currently still serving, stated that when asked the question of what it meant for her to be there to take part in honoring these fallen soldiers, it automatically brings tears to her eyes and that there are no words to describe it. Sgt. Wilson and her husband, Todd Wilson, came down from Roopville, GA in Carroll County to participate in the event. 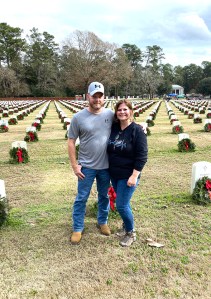 U.S. Army Sergeant Sonya Wilson and her husband, Todd Wilson, came to Andersonville from Roopville, GA to take part in the Wreaths Across America event.
Photo by Ken Gustafson

After the ceremony was over, many in the crowd stayed and continued to honor these fallen heroes by laying wreaths on each of the 20,300 tombstones in the cemetery. 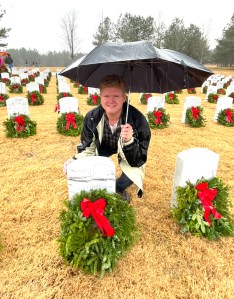 Dale Gustafson, the brother of  the writer of this article, lays a wreathe on the grave of U.S. Army First Sergeant Philip E. Gustafson at the Wreaths Across America event at Georgia National Cemetery in Canton, GA.
Photo by Barbara Gustafson

This is an annual event that will take place every year at this time and it is for the specific purpose of doing three specific things: remembering and honoring those veterans who have passed and who are still living and teaching those who come behind us about the heavy price that has been paid and continues to be paid to this day to keep America free.