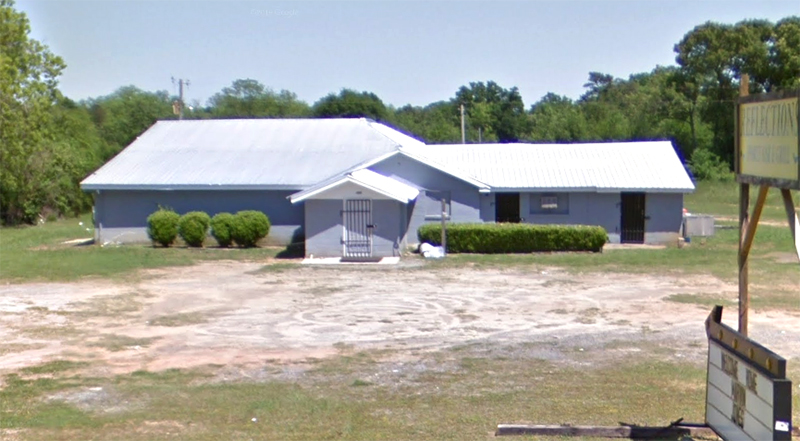 This is the Reflections Club, located at 222 Loop Rd. in Plains, GA. The club is applying for an alcoholic beverage license, but due to inappropriate behavior involving strip dancers at the club, the BOC approved the license on the condition that the club submit a plan of action to the county stating what it plans to do to make sure that this type of activity never happens again at Reflections. Submitted Photo

AMERICUS – At its December Regular Meeting on Tuesday, December 21, the Sumter County Board of Commissioners (BOC) held a public hearing to discuss the request from Reflections Club for an alcoholic beverage license. Reflections Club is a restaurant and bar located at 222 Loop Rd. in Plains. Once the discussion was completed, the BOC eventually voted unanimously to approve the license, but with conditions due to some highly inappropriate activity that recently took place at that establishment.

Heather Tyler, who serves as the Zoning Administrator for Sumter County, told the BOC at the public hearing that while the Sumter County Planning and Zoning Board was going through the checklist to make sure that the club met all of the necessary requirements for the license, the SCPZB received from an anonymous source photos of strip dancers wearing provocative clothing at the club. Tyler brought those photos with her to the public hearing to present the BOC as evidence. When Board Chairman Mark Waddell asked Tyler for more clarification regarding the so-called “strippers”, Tyler replied that this activity occurred during a birthday party and that flyers advertising the event were posted on gas pumps around Plains and Americus. According to Tyler, these flyers stated that all strippers and dancers are welcomed for one night only, which raised a red flag.

Waddell asked Tyler what the actual policy states regarding dancers and strippers in establishments. Both Tyler and Commissioner Scott Roberson replied that the policy states that there can be no nude dancing or “live entertainment where any person appears unclothed or in such attire, costume or clothing as to expose any portion of his or her specified anatomical areas, or where such person performs acts of specified sexual activities or acts which stimulate specified sexual activity, as defined herein.” This exact policy is stated in Article III regarding Adult Entertainment Business Sec. 6-97 – findings; public purpose, which is posted on the Sumter County Code of Ordinances website: https://library.municode.com/ga/sumter_county/codes/code_of_ordinances?nodeId=PTIICOOR_CH6ALBE_ARTIIIADENBU.

Tyler told the BOC that the SCPZB went to Sumter County Fire and Rescue Chief Jerry Harmon and explained to him what was going on and then explained the situation to County Administrator Rayetta Volley, who in turn drafted a letter to Reflections asking the owners to attend a BOC Public Hearing on the matter. Volley said that the letter also contained the violation of Sec. 6-97 of the Sumter County Code of Ordinances that occurred at Reflections.

Eva Dennard Harvey, who operates Reflections and rents it from the building’s owner, Bowman Wiley, told the BOC that she knew that there was going to be a girl there dancing, but did not know that it would turn out the way it did. She stated that she was at the bar working and wasn’t aware that this activity was gong on. “I would never have any entertainment like that to happen again,” Harvey told the BOC. She added that in the future, she would come up with a plan to make sure that this type of activity would never happen again at her club. She stated that this was one mistake that she made and promised the BOC that she would never let this happen again. She also reiterated that she knew there was a girl there that was dancing, but didn’t know that it would be as bad as it was and wasn’t aware of it because she was at the bar working.

Bowman Wiley, who owns the club but leases the building to Mrs. Harvey, told the BOC that he has been in this business since 1964 and has owned the building that houses the club since then. “Since that time, we’ve had an alcoholic beverage license in this county. We have never, never had anything like this,” Wiley told the BOC. “I want to apologize to the Commissioners. I want to apologize to the entire county for this type of behavior. This type of behavior will not be tolerated at Reflections.”

Wiley went on to tell the BOC that it can do whatever it deems fit as far as the license is concerned, but added that since he took ownership of the building in 1964, there has never been a shooting or a murder at Reflections and that he and his staff have tried to run a nice, clean business. As far as what he would like to do now that the stripping incident has taken place at his club, Wiley proposed to the BOC a three-step plan to make sure this type of activity never happens again.

Waddell stated that this is uncharted territory for him and asked for any recommendations. He asked Volley what the county did in the past when establishments such as the Reflections Club violated a county ordinance. Volley replied that it depends on the situation. “I know previously that we have suspended some, but that was based off the fact that they didn’t meet all of the criteria from Code Enforcement and Fire,” Volley said. Volley went on to say that those establishments were suspended from operation for 30 days until they met the criteria. “It depends on the circumstances. It depends upon what’s going on,” Volley said.

Commissioner Jesse Smith stated that being that the owners of Reflections have stated that they plan to put in stop gap measures to make sure this activity doesn’t ever happen again at their club, they should be granted an opportunity to operate their club with those measures in place. Commissioner Roberson stated that some of the deputies of the Sumter County Sheriff’s Office work security while off duty and suggested that they could be hired to do security at the club. However, Volley stated that this was tried in the past, but they said that they couldn’t do security at an establishment because they would be a big liability.

Waddell stated that while he doesn’t want to stop the operation of Reflections, there needs to be something as a penalty for violating the policy stated in the County Code of Ordinances. “We should do something because otherwise, I guarantee you, no matter what happens the next time, it’s gong to be 10 times worse. You didn’t do anything last time, you can’t do anything now,” Waddell said. He went on to suggest letting Reflections continue to operate, but turn the matter over to the Magistrate Court and let it make the decision as to what the penalty will be.

Waddell went ahead and entertained a motion to not suspend or revoke the alcoholic beverage license for Reflections. Commissioner Roberson made a motion for approval and Commissioner Smith seconded the motion. The BOC voted and the motion carried unanimously. Being that Reflections met all of the requirements from Code Enforcement and Sumter County Fire and Rescue to have its alcoholic beverage license, Waddell stated that the BOC will approve the license to Reflections on the condition that the club will submit to the county a plan of action describing what it plans to do going forward to make sure that the “stripping incident” will never take place again.

Waddell entertained a motion to approve the alcoholic beverage license for Reflections pending the plan of action being given to the county that states that going forward, the situation that took place that violated the county’s policy doesn’t happen again. Commissioner Roberson made a motion for approval and Commissioner Smith seconded the motion. The BOC voted and the approval passed unanimously. With that, Waddell closed the public hearing.

In other news from the meeting, the BOC voted unanimously to approve the request to abandon and close all of G.W. McLendon Road at its intersection with State Route 228 and ending approximately 0.97 miles north of the Sumter County Line.

There was also a discussion on county redistricting and redrawing the county’s districts. According to Waddell, Volley had sent out maps showing the proposed redistricting to all of the Commissioners. Waddell stated that there have been more changes in the redistricting that do affect more districts since the BOC discussed the matter in November. “I’m not sure if there is anything at the moment for us to discuss, or if there are questions right now and we need to continue to review it,” Waddell told the BOC. “If there’s something that we feel like needs to be changed or isn’t something that we want to do, we can go back and look at it.”

Waddell went on to say that in addition to the changing of the maps, there is other information that he would like to have access to, such as the population shift in the number of people in Sumter County. “I now that overall, the population of the county decreased, so what’s the make up now of each district from a numbers standpoint,” Waddell told the BOC. “The last time we went through this, we had that information.” Volley stated that the information Waddell was looking for should be in one of three emails that were sent out to the BOC members. Volley went on to say that if the BOC doesn’t agree with what’s been drawn up and a line has to be shifted, it involves more than just shifting a line. It’s shifting a block. “Those blocks have to equal,” Volley said. “You have to have the same amount of races, etc. The block has to equal. You can’t just move a line. It has to be moved in a block and it has to equal, as far as races and etc. in that block.” No approval was made regarding the county’s redistricting, but Waddell stated that the BOC would continue to review the issue.