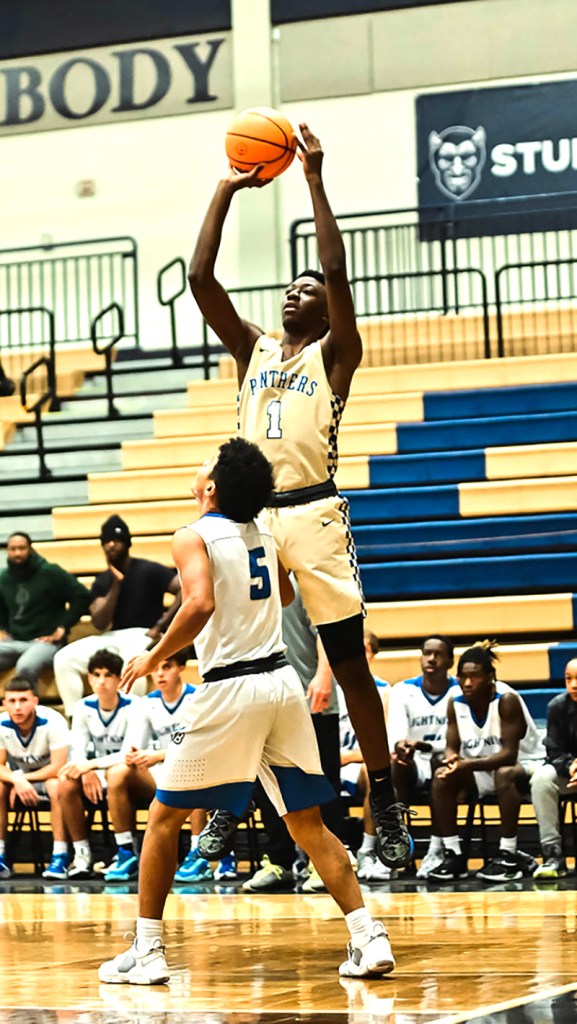 Sumter County senior guard Kyric Davis (1) goes up to hit a short jumper against Cypress Bay (FL) in the championship game of the Lemon Street Classic in Marietta, GA, in which SCHS won 38-35. Davis also scored the winning basket against River Ridge in the tournament semifinals with four seconds left to give the Panthers a 58-56 victory. He also led the Panthers in scoring in the championship game with 16 points. Photo by Linda Mills Photography

MARIETTA, GA – The Sumter County High School Varity Boys Basketball Team (SCHS) traveled up to Marietta, GA and played three straight days of solid basketball at the annual Lemon Street Classic at Marietta High School. The Panthers introduced themselves to the field on Saturday, December 19, by dispatching Blythewood (SC) 54-43. Then on Monday, December 20, they edged out River Ridge (RR) from nearby Woodstock, GA 58-56 on a basket by senior guardvKyric Davis at the buzzer. This put SCHS in the championship game against Cypress Bay from Weston, FL on Tuesday, December 21. In that game, the Panthers grinded out a 38-35 victory over the Lightning in a low-scoring affair to win the Lemons Street Classic.

Davis led the Panthers in scoring in the championship game with 16 points. Junior forward Brandon Pope had 10 and junior point guard D.J. Hurley scored six in the winning cause. 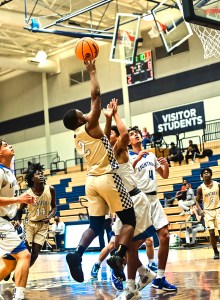 To get to the championship game, the Panthers had to earn a hard-fought, down to the wire win over River Ridge (RR) the day before. In that game, SCHS didn’t have the lead until late in the fourth quarter when Brandon Pope hit a three-pointer. Davis scored 10 of his team-leading 16 points in the fourth quarter of that game while he was in foul trouble, but after a timeout with four seconds left and the score tied at 56-56, Davis received a pass and went straight to the basket and scored at the buzzer over RR 6’11 center Braden Pierce to win the game for the Panthers. 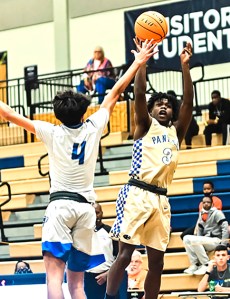 In addition to Davis’s 16 points to lead SCHS in the win over the RR Knights, Dowdell was also in double figures with 14 points and junior shooting guard Cameron Evans scored 13 in the winning cause.

The Panthers are now 9-1 overall and will return to action on Monday, December 27 when they take on the Rome Wolves at State Farm Arena in Atlanta as part of an invitational event for high school teams put on by the Atlanta Hawks. The SCHS girls’ team will be there as well and will take on the Rome Lady Wolves at State Farm Arena that same day at 12:45 p.m., followed by the SCHS boys’ game at 2 p.m. This all takes place before the Hawks host the Chicago Bulls later that evening. 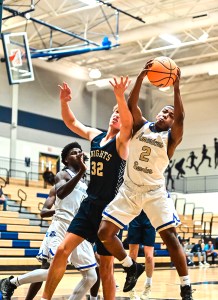 D.J. Hurley grabs a rebound in the Panthers’ tournament semifinal game against the Knights of River Ridge.
Photo by Linda Mills Photography

From Atlanta, it’s on to Tifton, GA for the Panthers, as they will compete in the McDonalds Classic at Tift County High School December 28-29. Their first opponent will be Cook High School from Adel, GA on Tuesday, December 28 at 6 p.m. After the holidays, the Panthers will focus on Region 2-AAA competition when they host Pike County on Friday, January 7 at 7:30 p.m.