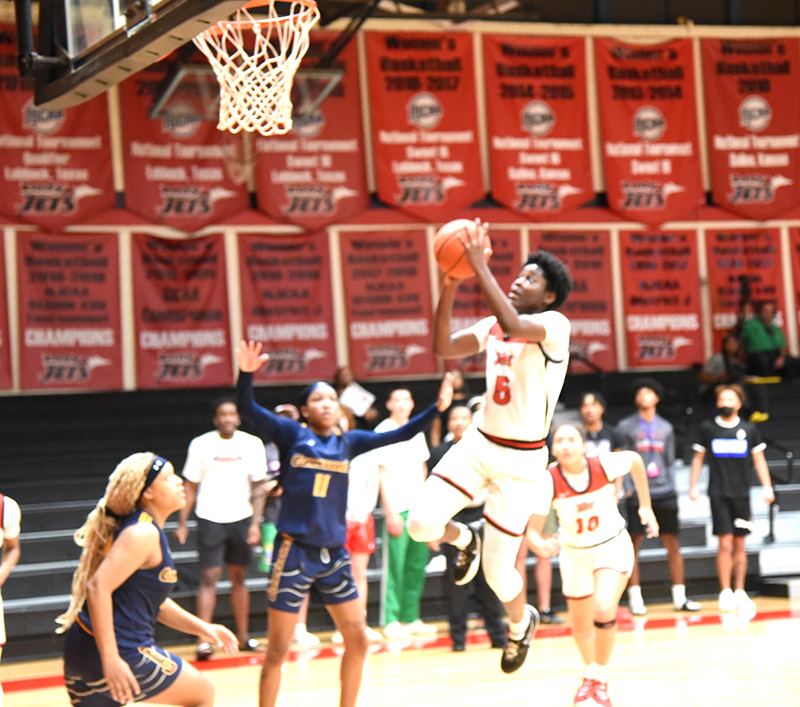 SGTC freshman small forward Alexia Dizeko was the top scorer for the Lady Jets with 29 points in the overtime win against Gulf Coast Community College. Photo by Su Ann Bird

With the win, the Lady Jets finish the tournament unbeaten and move to 14 – 4 on the season.

In the other games on Thursday, the ninth ranked Georgia Highlands Lady Chargers also finished the tournament unbeaten with a 91 – 55 victory against Tallahassee Community College. Eastern Florida finished the tournament with a win over Chattahoochee Valley Community College and Lawson State College took a narrow 60 – 57 win over St. Petersburg College.

“There was a lot of good basketball played during the Lady Jets Holiday Classic, but the final game between the Lady Jets and Gulf Coast was very exciting to watch and we were fortunate to come away with the overtime victory,” said SGTC Athletic Director and Lady Jets Head Coach James Frey.  “Sophomore Kamiya Hollingshed hit back to back three-pointers in overtime to put us back into a position to win after Gulf Coast went up by eight points in the five-minute overtime.”

Hollingshed ended the night with a total of nine points but six of those came in the overtime to lift the Lady Jets to victory.  She was helped by freshmen Alexia Dizeko and Susana Posada who hit key free throws in overtime to clinch the 88 – 85 victory. Luana Leite also hit a key free-throw to help the Lady Jets keep their hopes of overtime alive in the final minute of play in regulation time.

SGTC Lady Jets James Frey was pleased with another win by the Lady Jets and had high words of praise for his team that refused to quit. We were up by 17 points at one time in the first half and were still up 34 – 26 at the half.  They came back and outscored us in the third and fourth quarters, but we did what we had to do to win.”

Freshman Alexia Dizeko led the team in scoring with 29 points.  She was perfect from the foul line hitting 12 of 12 and then was eight of 18 from the field and one of two from the three-point line.  She also led the team in rebounds with 13.  Freshmen Luana Leite and Fanta Gasama were the only two other Lady Jets in double-digits with 12 and 11 points each.  Leite had five rebounds, five assists and one steal. Gasama, who fouled out, had six rebounds and one steal.

The Lady Jets travel to Macon to play Central Georgia Tech in a conference game on January 5th at 5:30 p.m.  They travel to Southern Crescent Technical College in Griffin on Saturday, January 8th at 1 p.m. for a double-header with the Jets playing at 3 p.m.