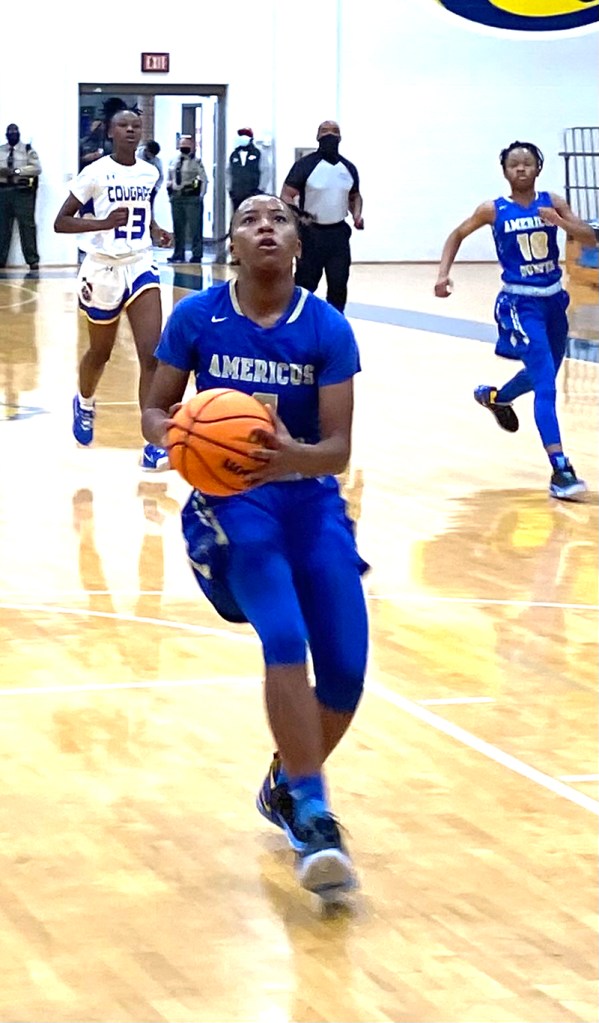 Sumter County junior guard Aviyonna Clemons drives to the basket and scores on a layup. Clemons would later score the winning basket for the Lady Panthers against Crisp County. Photo by Ken Gustafson

CORDELE – After edging out Central-Macon in a low-scoring affair the night before, the Sumter County Lady Panthers (SCHS) found themselves in another low-scoring struggle against their rivals, the Lady Cougars of Crisp County (CC). However, in the closing minutes of the game, SCHS junior guard Aviyonna Clemons gave the Lady Panthers the lead on a layup and they were able to hold on for a 47-46 victory over the Lady Cougars on Saturday, January 15 at Crisp County High School in Act 1 if the “Battle of the Flint.”

With the win, the Lady Panthers improve to 12-6 overall and remain undefeated and in first place in the Region 2-AAA standings at 9-0.

As was the case the night before against Central-Macon, so it was against CC. The Lady Panthers struggled at times in their half court offense and Jackson was once again neutralized on the blocks and only scored four of her game total of 12 points in the first half. 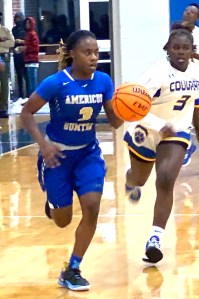 However, in the second half, particularly in the fourth quarter, SCHS was able to push the tempo and scored key transition baskets. The Lady Panthers were also able to create turnovers and score off those turnovers. These things proved to be crucial in the Lady Panthers’ victory.

Clemons led SCHS in scoring with 14 points and both Jackson and Tiffani Goodman each had 12 in the winning cause.

The first quarter was an evenly played quarter between both teams, but the Panthers took a 13-9 lead on a layup by Jackson as the horn sounded to end the quarter.

Over the first three minutes of the second quarter, the Lady Panthers were able to build a 17-12 lead on transition baskets by Goodman and Clemons. However, CC’s Marlasia Wilson drained a shot off the glass to get the Lady Cougars to within three. 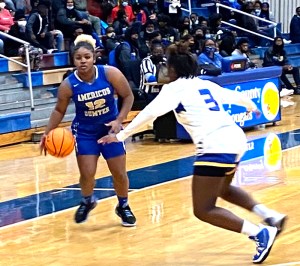 Sumter County junior forward Haley Moore tries to get by her defender.
Photo by Ken Gustafson

The Lady Panthers were able to push the ball on occasion in the second quarter, but could not finish their chances. Then with a minute left before halftime, CC guard Micaylen Holmes sent a bounce pass to a cutting A’jada Brown, who finished with a layup. This was followed by another CC basket by Jada Mumphrey and it gave the Lady Cougars a 20-17 lead at the half.

Goodman led SCHS in the first half with seven of her game total of 12 points.

SCHS struggled offensively early in the third quarter, but got their up-tempo offense going. As a result, the Lady Panthers went on a 10-3 run to take a 27-25 lead.

Then with under two minutes left in the third quarter, SCHS forced back-to-back turnovers and capitalized by scoring two straight fast break baskets to take a 33-27 lead. The Lady Cougars scored four straight points to cut their lead to two at 33-31, but Jackson responded by hitting one of two foul shots to give the Lady Panthers a 34-31 lead with one more quarter to play.

After a stagnant first half offensively, the Lady Panthers finally got their up-tempo offense going in the third quarter and they were able to score points off turnovers.

With six minutes to play in the game, the Lady Cougars had a golden opportunity to take the lead, but Adasia Lee missed a wide-open layup, which would ultimately prove to be costly for CC. However, the Lady Cougars were able to score four unanswered points and took a 37-34 lead before timeout was called with 4:31 to play.

Out of the timeout, Jackson was able to score on the inside, but CC went on an 8-2 run to take a 42-36 lead. Jackson was able to make one of two free throws after getting fouled and would later make two more to cut the SCHS deficit to 42-39. Then Cornecia Luster drained a three-pointer off the glass to tie the game at 42-42.

The Lady Cougars scored to retake the lead, but Kaylin Holley came through with a three-pointer to give the Lady Panthers a 45-44 lead. Micaylen Holmes regained the lead for the Lady Cougars with a basket, but Clemons responded with the deciding basket of the game to give SCHS a 47-46 lead with 44 seconds left.

CC had a chance to take the lead on its next possession, but threw the ball out of bounds. This gave the Lady Panthers a chance to run clock and possibly salt away the game, but they nearly turned the ball over.

With 3.1 seconds left, Goodman was fouled, but missed the front end of a one and one. The ball went out of bounds and was last touched by the Lady Panthers, but there were only 0.6 seconds left. The Lady Cougars’ attempt at a final prayer was snuffed out when SCHS intercepted the in bounds pass at half court to seal their 47-46 victory.

SCHS will take on Monroe down in Albany on Monday afternoon at 4 p.m. as part of a Martin Luther King Jr. holiday special. They will then step back into region play when they host Upson-Lee on Friday, January 21 at 6 p.m.

Act 2 of the girls’ basketball version of the “ Battle of the Flint” will take place on Saturday, February 5, when the Lady Panthers will host Crisp County. Tip-off for that game is scheduled for 6 p.m.