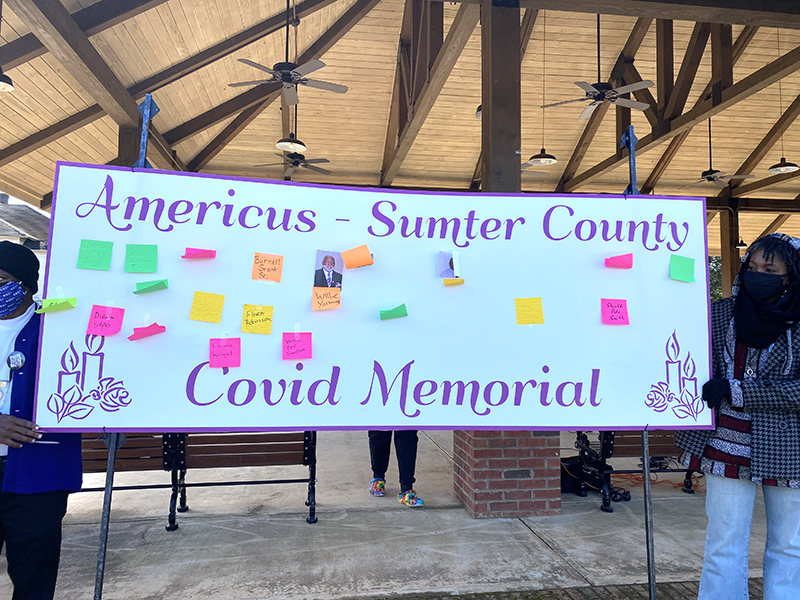 This is the Americus-Sumter County Covid Memorial Board. During the Martin Luther King commemorative event on Monday at the Americus Train Depot, relatives of those in Sumter County who lost their lives due to COVID-19 placed pictures of their deceased love ones, along with pieces of paper with the names of those loved ones on this board in their honor and memory. Photo by Ken Gustafson

AMERICUS – On Monday morning, January 16, a small crowd gathered at the Americus Train Depot on South Jackson St. for an MLK commemorative event to celebrate the life and legacy of Dr. Martin Luther King Jr. and to remember those in our community who lost their lives due to COVID-19 by placing pictures of the fallen on the Americus-Sumter County COVID Memorial Board.

This event is normally held every year on the MLK Holiday at Friendship Missionary Baptist Church, but was moved to the Americus Train Depot this year. 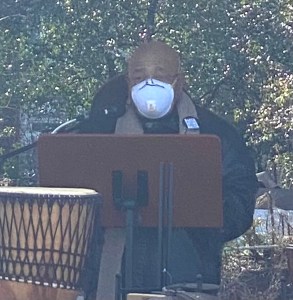 The Rev. Mathis Wright, who is the president of the Sumter Branch of the NAACP, led the crowd gathered in an opening prayer and issued a challenge to those gathered to get out and vote.
Photo by Ken Gustafson

After some opening remarks from the Mistress of Ceremony, Mrs. Lorena Barnum Saabs, Rev. Mathis Wright, president of the Sumter Branch of the NAACP, led the crowd in an opening prayer. Once he was finished praying, Rev. Wright took the time to express his belief that there is “gerrymandering in voting” and that America is turning away from its motto, “In God We Trust”. Rev. Wright went on to say that everyone who is eligible to vote should be allowed to vote.

“It is something that brings us all together where no matter where you fit, whether you’re rich or poor, your vote makes you equal that day,” Wright told the crowd. “And as far as the things that happen in the legal system about what they’re doing with the laws, the people that I work with, if you don’t vote, then we have nothing to litigate, nothing to fight about.” Wright went on to urge everyone in the crowd to vote regardless of “how they say they are gong to gerrymander.” He added that he and others will help anyone who needs the necessary things to vote, such as identity, to be able to have those things in order to vote, but to not become discouraged and not vote. Rev. Wright added that discrimination has been around and will still be here on this side of the grave, but that as long as people keep right on their side and stand boldly on what is right, God will promise to never let anyone be made ashamed. “I’m a living witness that that happens regularly in my life,” Wright said to the crowd. 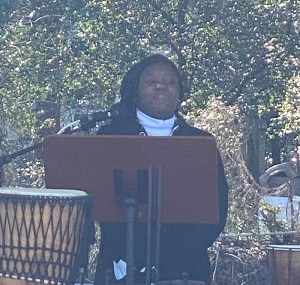 Vocalist Taylor Harris sings and helps lead the crowd in the singing of “Lift Every Voice and Sing.”
Photo by Ken Gustafson

Once Rev. Wright was finished, Vocalist Taylor Harris led the crowd in the singing of “Lift Every Voice and Sing”. This was followed by an oration of Dr. King’s speech entitled “Our God is Marching On; How Long, Not Long”. This was a speech given by Dr. King on March 25, 1965 regarding the march from Selma to Montgomery. Orator Kylon Harris delivered Dr. King’s speech to the crowd gathered. 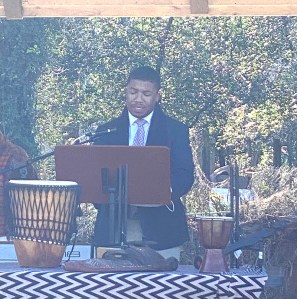 After a time of praise and worship from the Friendship Praise Team, it was time to hold a special ceremony for those in the community who lost their lives as a result of COVID-19. Those who had lost loved ones from COVID-19 were able to place pictures of their deceased loved ones up on the Americus-Sumter County COVID Memorial Board. At least 20 people came forward and placed the names and the pictures of those who had passed as a result of COVID-19. 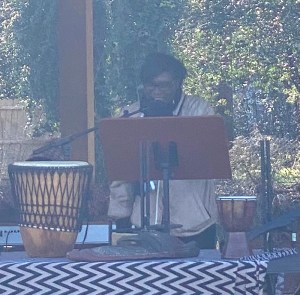 Lakiea Taylor, the mother of Taylor Harris, sings and helps lead the crowd gathered at the MLK commemorative event in the singing of “Lift Every Voice and Sing”.
Photo by Ken Gustafson

Charlene Edge placed a picture of and a piece of paper with the name of the late Dr. John D. Marshall up on the board. Dr. Marshall was the president of the Sumter County Chapter of the NAACP and Charlene’s husband, Eugene, is the vice president. “We were all close to Dr. Marshall,” Eugene Edge said. “Dr. Marshall was a wonderful guy. We always called him a drum major for justice. He was a champion for our causes and just a wonderful person.” 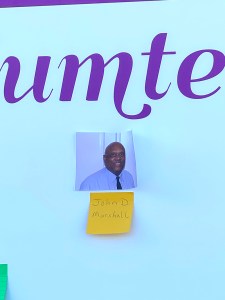 Following the tribute, Lorena Barnum Saabs, the Mistress of Ceremony (MC), commented that those people whose pictures were up on the board were real people and were loved and missed. She added that those who stand out in the community who are unvaccinated, unmasked and haven’t gotten a booster shot yet should consider those people who are in pain today at the loss of someone they loved so dearly. “Don’t be a part of more loss,” Saabs told the crowd. “Do whatever it is you feel comfortable with because it’s not just your life and your health, but it’s everyone you come within six feet of that you might put in danger,” She continued.

At that point, Saabs introduced Trenton Floyd, a young man who constructed his own tribute that he recited to the crowd. 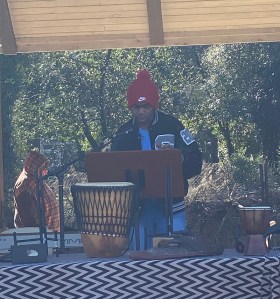 High School Student Trenton Floyd recited a tribute at the MLK commemorative gathering describing the problems among African-American young people and how those problems can be solved.
Photo by Ken Gustafson

“According to the recent data by the Department of Education, African-American students are arrested far more often than their white classmates,” Floyd told the crowd. He added that students of color face harsher punishment in school than do their white peers and that there is a higher incarceration rate among students of color. “While people of color make up about 30 percent of the United States population, they account for six percent of those in prison,” Floyd said. “Not only that, but once convicted, black offenders receive longer sentences compared to white offenders. Hello, my name is Trenton Floyd and I say it’s time to stop the racial profiling and discrimination. If we humble ourselves and turn from our wicked ways and end the bigotry of our forefathers, then we can stand together hand in hand and truly classify ourselves ‘We the People’. The problem is most people don’t believe racism is still going on,” Floyd continued. He added that many people think racism is a thing of the past, but that policemen are still shooting, beating, bruising, murdering and shedding innocence of integrity away from black men for no given reason. “We as a nation have become so inhumane for equality that our children are beginning to believe it is right,” Floyd said. “Kids are not born racists. Instead, it is imbedded in them or taught to them.” He added, in so many words, that children are not born racists, but that a parent raises a child to like those despite what they look like. “We have given up on what’s right and have fallen for what’s wrong,” Floyd said. “How am I supposed to trust anybody if I cannot trust the one whose supposed to protect me. We have come a long way from negro slaves and segregated blacks, but now, now we’re at the killing of 15-year-old boys at traffic stops,” Floyd said.

He then challenged all African-Americans to stop victimizing each other. “There is something I must say to my people. For us to stop being the victim, we must stop victimizing ourselves,” Floyd said. “We must stop making ourselves a problem and become a solution.” He went on to say that 93 percent of black homicide victims are killed by other blacks and that black people are so use to being broken mentally that close to 27 percent of all black men, women and children are living at the poverty level. He then quoted black gospel artist Kirk Franklin when he said, “I refuse to be another black statistic.”

Floyd added that he plans on being great. “I care not to be less. I refuse to wear a bar code across my chest,” Floyd said. “I refuse to let a black T or a throw back jersey define me.” The rest of Floyd’s poem basically stated that he refuses to be a part of the “generational curse” and that he wants to represent Christ to the fullest.

“We shall learn from what the past has taught us. We have hope for what the future will bring us and we will march on to victory as one because the dilemma that we are in now, I refuse to accept,” Floyd said. 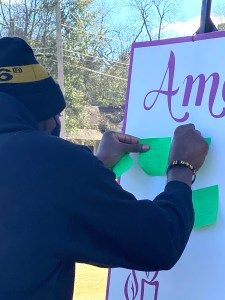 A relative of one of the people in Sumter County who passed away due to COVID-19 places a piece of paper with the person’s name on it on the Americus-Sumter County Covid Memorial Board at the MLK commemorative event held at the Americus Train Depot on Monday, January 17.
Photo by Ken Gustafson

Once Floyd was finished, the crowd erupted in applause. Saabs commented that sometimes, it is not what is said, but who says it. “It comes from his own personal experiences and I am so proud to stand here today because somebody is going to look back and say, ‘I remember when that boy was at the depot at Jackson St.’ That’s how awesome he is,” Saabs said of Floyd’s poem.

Near the end of the program, Brother Abercrombie from the Sumter Chapel gave a prayer for community healing. The prayer consisted of praying for the healing of various issues in the community and after each of those issues was named, the crowd responded with ”Lord, hear our prayer.”

After the prayer for community healing, Saabs thanked the committee for putting together the MLK commemorative event together and the proceedings concluded with a closing prayer by Bishop Melvin McCluster of the Friendship Missionary Baptist Church and the singing of “We Shall Overcome”.