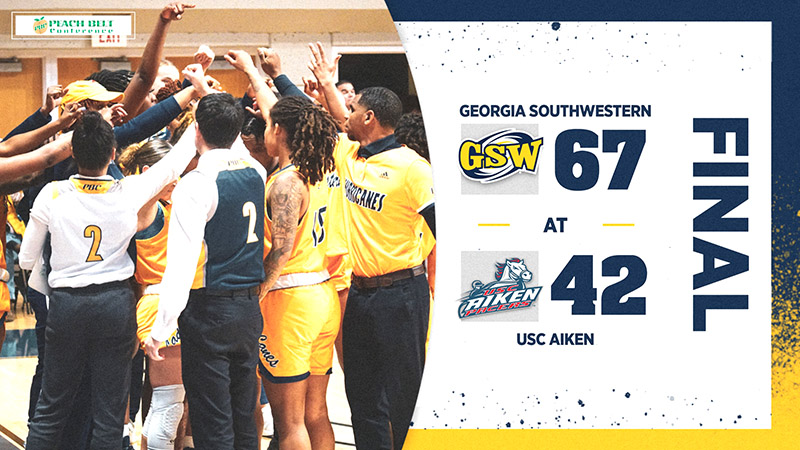 The GSW Lady Hurricanes were able to earn a season sweep over the USC Aiken Pacers by netting a 67-42 victory at the Storm Dome on Saturday, January 15. Photo by GSW Athletics

AMERICUS – The Georgia Southwestern State University women’s basketball team (GSW) defeated the USC Aiken Pacers for the second time this season. This time, it was a 67-42 decision on Saturday, Janaury 15 at the Storm Dome. As a result, the Lady Hurricanes (12-2, 4-1 PBC) continue to hold second place in the Peach Belt Conference standings.

In the first meeting between the two teams in Aiken, SC back on December 16, the Lady Hurricanes defeated the Pacers 73-52.

GSW’s defense led the way, holding USC Aiken to single digits in the first and second quarters. The first quarter was close with neither team finding many points early. Simone Lett led the GSW defense in the game by adding four blocks and one steal off the bench. The Lady Hurricanes’ offense started rolling in the second quarter, putting up 19 in the second quarter alone, while holding the Pacers to just 17 in the first half overall. GSW went into the halftime break holding a 13-point lead.

GSW’s offense started rolling in the third quarter, with Kayla Langley scoring six of the first eight to start the third quarter. The Pacers had no answer for the Lady Hurricanes down low as Langley scored a season-high 23 points and adding eight rebounds to the cause, earning her Player of the Game honors.

The Pacers battled in the fourth and final quarter, holding the GSW to just 11 points. However, the late effort was not enough and the Lady Hurricanes cruised to their 12th win of the season.

GSW was held below its average offensively, but the Lady Hurricanes’ defense heavily limited the Pacer offense, holding them to zero made FG’s from beyond the arc. GSW outrebounded the Pacers by double digits behind Simone Lett‘s 11 rebound night and Langley ended all hope for the Pacers when she scored four of the first five baskets in the fourth quarter.