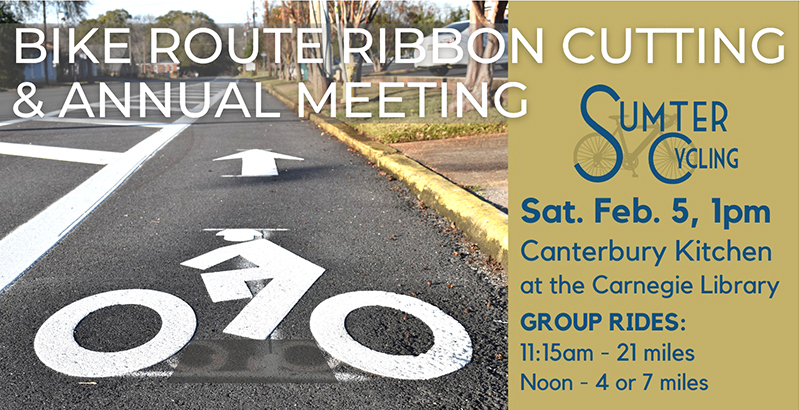 Sumter Cycling will be hosting its Saturday Ride in February on Saturday, February 5, along with a Bike Ribbon Cutting to commemorate the new Americus Bike Route. Sumter Cycling will also be holding its annual membership meeting on that day as well. Submitted Photo

AMERICUS – Sumter Cycling will be hosting its first Saturday Ride in the month of February on Saturday, February 5. The organization will also host a ribbon cutting to commemorate the opening of the new Americus Bike Route and will hold its annual meeting that afternoon at 1 p.m.

Riders on this route have the option of stopping at the ribbon cutting after four miles. Both rides will start at Canterbury Kitchen.

Following the rides, there will be an official ribbon cutting at 1 p.m. in front of Canterbury Kitchen (The old Carnegie Library at 611 South Jackson Street). Following the ribbon cutting, riders can join Sumter Cycling for its annual membership meeting with a complimentary lunch prepared by Canterbury Kitchen. Those who would like to participate in the rides should send an RSVP to sumtercycling2020@gmail.com.

As a part of its annual meeting, Sumter Cycling will elect a board of directors for the new year.  For those interested in serving or making a nomination, please send name and contact information in a reply to this sumtercycling2020@gmail.com.