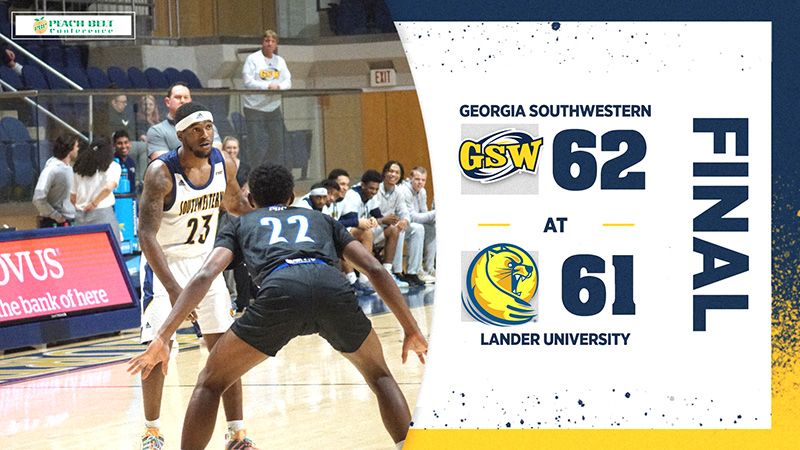 AMERICUS — The Georgia Southwestern State University Men’s Basketball Team (GSW) edged out Lander University 62-61 for its first Peach Belt Conference win of the season Saturday afternoon, January 22, in the Storm Dome. The Hurricanes cut a six-point halftime deficit and shut down a buzzer-beater attempt to complete the comeback over the Bearcats.

The first half moved quickly, with neither team getting into foul trouble. Both teams struggled during their few attempts at the foul line, shooting 25 percent and 33.3 percent respectively. Lander made six from beyond the three-point line, which accounted for 18 of their 31 points.

GSW senior guard Donte Tatum led the Hurricanes with eight heading into the halftime break and GSW went into the locker room trailing the Bearcats 31-25 at the half.

The second half was a much more physical half on both sides and both teams turned up the intensity after the break. GSW freshman guard Jarrett Adderton found his way to the free-throw line often converting all seven of his attempts from the line. Tatum continued his pace in the first half scoring 12 points with five rebounds and two assists. The Hurricanes took a 62-60 lead with 1:10 left in the game and both teams traded missed baskets until LU’s DaJuan Moore made one of his two free-throw attempts to cut the lead to just one. A last-second inbound play was disrupted by GSW junior guard Devon Higgs, who forced the Bearcats into an errant shot as the buzzer sounded. The shot attempt missed the rim and the Hurricanes ended their losing streak, defeating the Bearcats 62-61.

Tatum nearly posted a double-double for the Hurricanes in this game. He led GSW with 20 points and grabbed nine rebounds. Adderton was also in double figures with 14 points and junior forward Kevin Kone chipped in nine in the winning cause.

GSW (5-10, 1-6 PBC) will not have much time to celebrate the victory. The Hurricanes must now focus on Young Harris College, whom they will host in the Storm Dome on Monday, January 25 at 7:30 p.m.