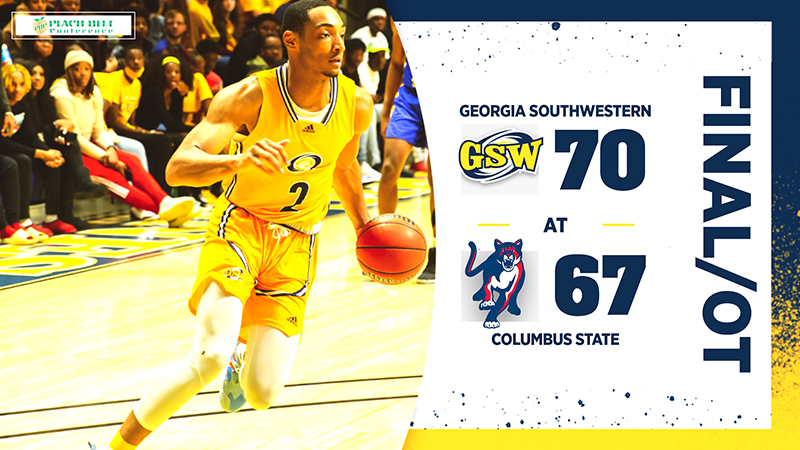 The Hurricanes (7-10, 3-6 PBC) started the game out by scoring the first seven points of the contest and they held the lead until three minutes left in the first half. However, the Cougars made a run and led at halftime by the score of 31-28.

After trailing by as much as 15 points in the second half, the Hurricanes, led by senior point guard Kahlon Whitely, cut their deficit to within five points with 2:49 left in the game. The Cougars responded by increasing their lead to nine points with 2:14 left and they held a six-point lead with 27 seconds left.

However, Whitely drained a three-pointer and GSW was able to force a turnover with 18 seconds left in regulation to give themselves a chance to tie the game. Jonathan King tried to tie the game on a three-pointer, but missed the shot. Fortunately for GSW, Jarrett Adderton was there with an offensive rebound with two seconds left. Adderton then stepped back behind the three-point line and attempted a three-pointer at the horn. Adderton’s shot didn’t fall, but he was fouled on the play by CSU’s Langston Gaither, which meant that Adderton could tie the game by making three foul shots with 0.4 seconds left. Despite the crowd noise and the pressure of the moment, Adderton stepped up and made all three free throws to send the game into an extra session.

CSU matched the GSW three-pointer with their own two minutes later in overtime, but on GSW’s next possession, Jonathon King got to the free-throw line and made one of his two foul shots to give GSW a one-point lead.

Once again after two possessions, with neither team finding the basket, CSU tied the game with 1:40 left in the contest. A Devon Higgs block on the defensive end gave the Hurricanes the ball and Whitely was able to find Higgs, who hit a three-pointer with 26 seconds left to give the Hurricanes 70-67 lead. GSW held strong by forcing a missed CSU three-pointer and they were able to secure the rebound and their come-from-behind victory.

The win puts the Hurricanes in eighth place in the PBC standings at 3-6. They trail Lander University for seventh place by one game (4-5) and they are a game and a half ahead of Clayton State, who is in ninth place at 1-7. GSW is five games behind the first place Flagler College Saints, who sit atop the PBC standings at 8-1.

The Hurricanes will make the road trip up to the North Georgia Mountains on Saturday, January 29 to take on Young Harris College in a rematch from three days ago. In the first meeting between the two teams on Monday, January 24, GSW won by the score of 86-76. Tip-off from YHC on Saturday is scheduled for 3:30 p.m.