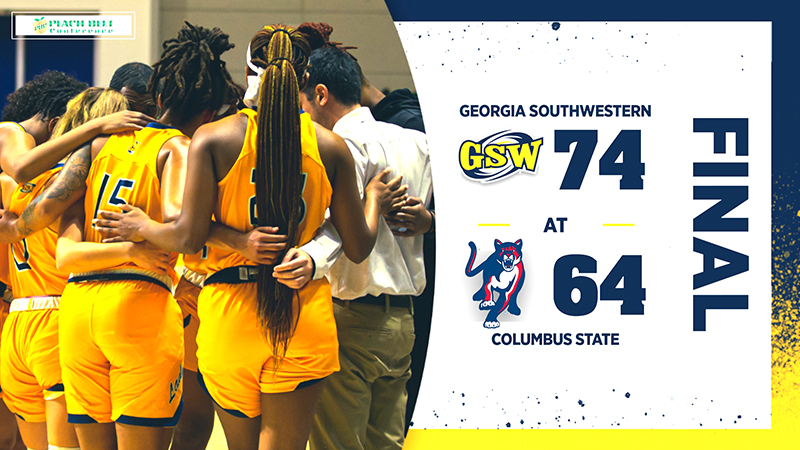 The GSW Lady Hurricanes are seen here in the middle of a timeout. GSW came back from 11 points down to defeat Columbus State 74-64 on Wednesday, January 26. Photo by GSW Athletics

COLUMBUS –The Georgia Southwestern State women’s basketball team (GSW) defeated Columbus State 74-64 for its seventh conference win of the season and its 15th overall. The Lady Hurricanes trailed by as much as 11 points in the first half, but they came alive in the second half and were able to pull off a come-from-behind victory.

With the win, GSW is now 15-3 overall and in second place in the Peach Belt Conference standings at 7-2.

Defensively, GSW struggled by allowing 42 first-half points, a season-high. At five minutes left in the second quarter, the Lady Hurricanes were down 11 points, which was their largest deficit of the game. However, GSW was able to pull to within five after a Jolicia Williams three-pointer. A quick basket by CSU’s Amber Abusbeih gave the Lady Cougars a 42-35 lead at halftime, but the Lady Hurricanes were within striking distance.

In the second half, GSW came alive on defense and held the Cougars to just 12 points in the third quarter after allowing 21 points in the first half. After the third quarter, the Lady Hurricanes had cut the CSU lead to five with ten minutes left in the game. GSW finally put it all together by starting the fourth quarter with an 18-5 run and broke the game wide open. After trailing for the majority of the game, the Lady Hurricanes coasted to a double-digit road win.

Ava Jones led the Lady Hurricanes in scoring with 22 points on nine of 14 shooting and Kayla Langley poured in 14 points for GSW in the winning cause.

The Lady Hurricanes will face Young Harris College for the second time this week when they head up the road to the North Georgia Mountains on Saturday, January 29. Tip-off from YHC is scheduled for 1:30 p.m.