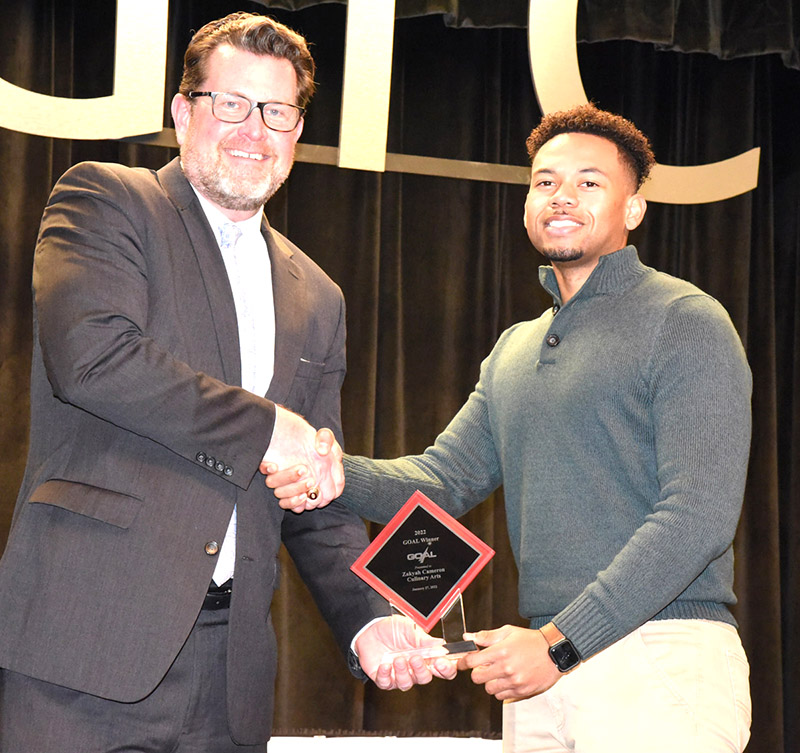 AMERICUS – Zakyah Cameron of Bonaire, GA, a culinary arts student in Chef Ludwig “Ricky” Watzlowick’s program, has been selected as the South Georgia Technical College Georgia Occupational Award of Leadership (GOAL) winner for 2022.  He will now represent the college in regional and state level competitions in an effort to be declared as the statewide Technical College System of Georgia Student of the Year and the face of technical education in Georgia.

South Georgia Technical College President Dr. John Watford made the announcement during a special luncheon ceremony in the John M. Pope Industrial Technology Center which spotlighted the four finalists in the competition that began with 14 outstanding students nominated for this honor by their instructors.  The other three finalists included: Gerode Prather of Lithia Springs from Motorsports Technology with Instructor Kevin Beaver, Kimberly Sadecky of Montezuma, GA from Criminal Justice Technology with instructor Teresa McCook; and Symone Stevens of Buena Vista, GA from Culinary Arts with Chef Ricky Watzlowick.

“I am very honored,” said Cameron after South Georgia Technical College President Dr. John Watford called his name as the SGTC 2022 GOAL winner. “I would like to thank Chef Watzlowick for nominating me for this honor as well as all of my fellow students for their support and encouragement.  Now, I will begin working toward the next goal and hopefully bring back a new car this year as the state winner.  I am very appreciative of my parents and South Georgia Technical College for giving me this opportunity.” 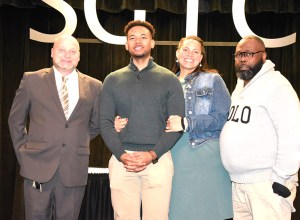 South Georgia Technical College Culinary Arts Instructor Chef Ricky Watzlowick (right) is shown above with Zakyah Cameron and his parents who were present at the ceremony where he was named as the SGTC 2022 GOAL winner.
Photo by SGTC

The 20-year old SGTC GOAL winner is currently a full-time student and employed full-time in the culinary arts industry. “Cooking has always been a part of my life,” said Zakyah Cameron.  “I say that I chose to study culinary arts, but really I think culinary arts chose me.  I think I have always known that I wanted to be a Chef.”  Cameron’s father is an executive Chef and even though Cameron began his career at a university to study culinary arts, he found that he was not getting exposed to the hands-on training that he wanted.

“I did my research and found South Georgia Technical College had an excellent Culinary Arts program that provided students with real life experience.  And it was very economical.  I am so glad that I chose South Georgia Technical College.  This is a great opportunity and I hope that I can make my parents, Chef Ricky, and the college proud that they selected me for this honor,” said Cameron.

SGTC Culinary Arts instructor and 2021 Instructor of the Year Chef Ludwig “Ricky” Watzlowick nominated Cameron and Symone Stevens for this honor.  “I am proud of all of the nominees.  They are all winners because they were nominated by their instructors as the best in their program areas,” said Chef Watzlowick, who added, “but I am especially proud of Zakyah Cameron and Symone Stevens. When we were asked to make nominations, I looked around my classroom and asked myself, who is the SGTC 2022 GOAL winner?  These two students had all the qualifications to fit that bill and I knew that one of them would be making the trip to Atlanta for the state competition.”

Chef Ricky Watzlowick believed in his students because he saw the desire and talent and the will to work and excel.  “Zakyah Cameron goes above and beyond in the classroom and in the lab.  I am pleased that he will be representing the college at the next level.” 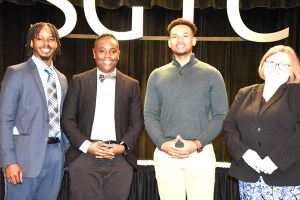 During the ceremony, special remarks and presentations were made by GOAL sponsors on behalf of the Sumter County Chamber of Commerce, the Americus Rotary Club and by SGTC President Emeritus Sparky Reeves and his wife, Allene. Martha Arrington, retired cosmetology instructor served as SGTC GOAL Coordinator this year, and oversaw the program and the process.

Cameron will now proceed to the regional judging in Tifton.  Nine regional finalists – three finalists from each of the three regions – will be announced during the Technical College System of Georgia’s State level competitions.  A panel of leaders from the business, industry, and government sectors will interview them and choose one to be the 2022 State GOAL Winner and the recipient of the GOAL medallion at a state-wide conference in Atlanta in April.  Additionally, the state winner becomes the spokesperson for technical education in Georgia for the entire year and is awarded a new car from Kia Motors.