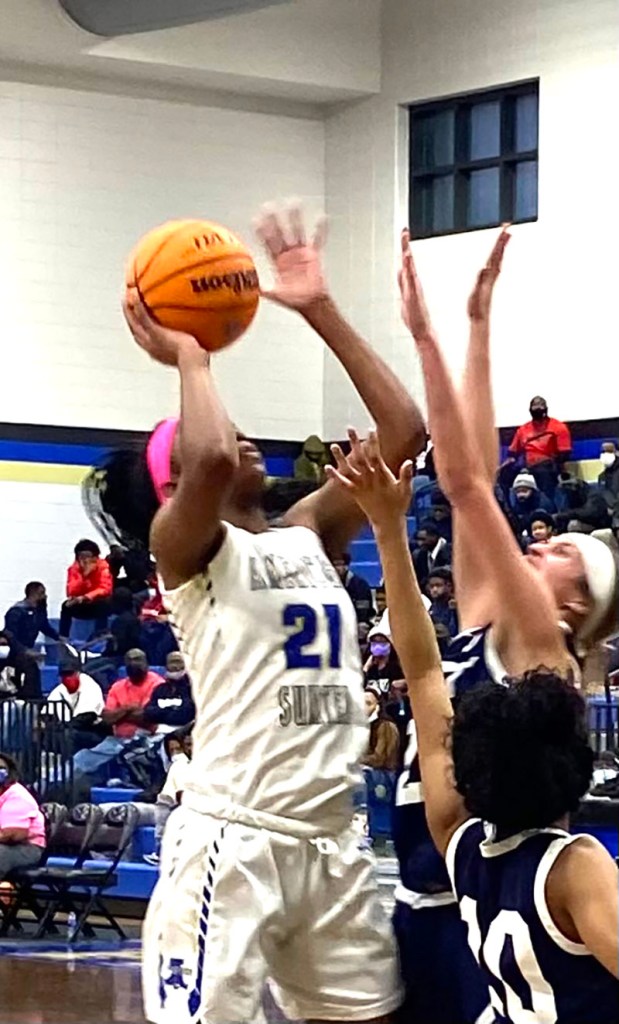 Sumter County senior forward Trinity Jackson (21) scored the basket that tied the game at the end of regulation against Tift County and scored a total of 14 points to help lead the Lady Panthers to victory. Photo by Ken Gustafson

AMERICUS – With four regular season games left before the upcoming GHSA Region 2-AAA Tournament, the Sumter County Lady Panthers (SCHS) needed to face a tough opponent to get themselves prepared for that tournament and beyond. The Tift County Lady Blue Devils (TC) were just such an opponent and they gave the Lady Panthers all they could handle. With the exception of a 10-point lead by TC at halftime, the game was a back-and-forth affair between the two teams. The Blue Devils were 1.8 seconds away from earning a road win over the Lady Panthers, but SCHS senior forward Trinity Jackson scored the tying basket at the end of regulation. In the overtime session, the Lady Panthers made key stops on the defensive end and they knocked down free throws down the stretch to secure a hard-fought 57-52 victory over the Blue Devils on Saturday, January 29 at the Pit.

With the win, SCHS improves to 16-6 overall and is still 11-0 in Region 2-AAA competition. With the loss, TC falls to 14-5 on the season, but is still undefeated in Region 1-AAAAAAA competition at 4-0.

“It was a good win against a really, really good team,” SCHS Head Coach Sherri Harris said. “We just fought. We didn’t give up tonight. We played a much better game than we did when we traveled over there to Tifton. I’m glad to get the win.” 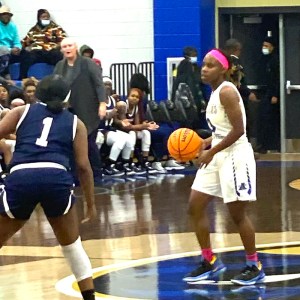 In the last meeting between the two teams in Tifton back in December, the Blue Devils handed the Lady Panthers a 62-41 loss, but in this second meeting in Americus, the Lady Panthers made the plays they needed to make on both ends of the floor in regulation and in overtime to earn the victory.

At the end of a back-and-forth first quarter between the two teams, the score was tied at 16-16, but during the first few minutes of the second quarter, both teams struggled offensively. However, with the score tied at 18-18, TC guard Skye McCray drilled a three-pointer to give the Blue Devils a 21-18 lead. This was the beginning of a 10-3 run by the Blue Devils and the Lady Panthers would go into halftime trailing 31-21. 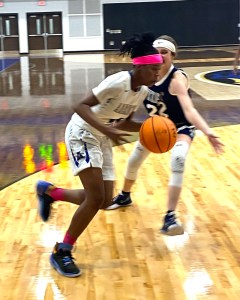 While TC was making its run, the Lady Panthers were struggling to score against the half court defense of the Blue Devils. SCHS was unable to hit shots from the outside and with the exception of five made free throws in the second quarter, the Lady Panthers could not put the ball in the basket.

Jackson scored eight of her 14 points in the first half to lead the Lady Panthers in first half scoring.

SCHS struck first in the third quarter when Goodman drove to the basket and scored. This seemed to wake up the SCHS offense, as Goodman would later find Jackson on the inside for an easy layup. Faith Hillman responded for TC with a basket, but the Lady Panthers were still in the game, trailing only by eight at 33-25.

The Lady Panthers would later cut their deficit to 35-30 when Jackson scored on the inside. This was the beginning of a 6-0 run by SCHS and the Lady Panthers, who were down by 10 at the half, only trailed by one at 35-34. With four seconds left in the third quarter, the Lady Panthers had a chance to take the lead when Goodman drove to the basket and was fouled in the act of shooting with 0.5 seconds left. Goodman was only able to make one of the two foul shots, but the Lady Panthers had tied the game at 35-35 with one quarter to play. 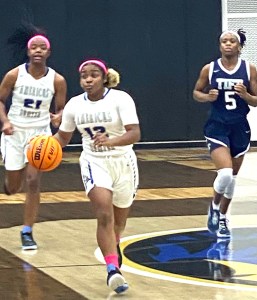 Sumter County junior small forward Haley Moore (12) hit a three-pointer in the fourth quarter to give the Lady Panthers a 40-38 lead with a little less than five minutes to go in regulation.
Photo by Ken Gustafson

Over the first three minutes of the fourth quarter, both teams traded baskets, but a three-pointer by Haley Moore gave the Lady Panthers a 40-38 lead with just under five minutes to play. Both teams traded baskets over the next two and a half minutes, but Caitlyn Burgess gave the Blue Devils a 45-43 lead on a three-pointer with less than two minutes to play.

After a timeout with 1:55 left, TC had the ball and tried to work it around for the good shot, but an offensive foul was called against the Blue Devils, giving the Lady Panthers a chance to tie or take the lead with under a minute to play.

SCHS ran its half court offense patiently and tried to find the high percentage shot, but with 45.3 seconds left, D’eria Clark drilled a three-pointer to give the Lady Panthers a 46-45 lead, prompting TC Head Coach Julie Connor to call a timeout.

However, out of the timeout, Burgess struck again with a three-pointer to give the Blue Devils the lead. Harris quickly called a timeout as the Lady Panthers had about 20 seconds left to try to tie or win the game, as they trailed 48-46.

Out of the timeout, SCHS was able to get a shot off. The shot was missed, but the Lady Panthers got the rebound. However, a double dribble violation was called against SCHS and the ball went over to TC with 5.6 seconds left. This prompted Harris to use another timeout. At this point, the plan was to get a steal or foul right away, but being that TC was not in the bonus, the Lady Panthers had fouls to give, which they used after not being able to get a steal. However, a blocking foul was called against TC, which gave the ball to the Lady Panthers. After a couple of timeouts with 3.1 seconds left, Goodman tried to inbound the ball into Jackson from the right side of the court, but it went off a TC player and out of bounds. With 1.8 seconds left, the Lady Panthers would have one more chance to tie or win the game.

Goodman then inbounded the ball to Jackson from the baseline and the 6’1 senior forward delivered with the tying basket at the buzzer. This game could not be decided in 32 minutes of play and would have to be decided in overtime. 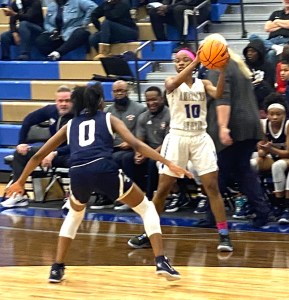 Aviyonna Clemons gave the Lady Panthers a 49-48 lead early in the overtime session by making one of two free throws and Goodman would extend the SCHS lead shortly thereafter when she drove baseline and scored. SCHS would later get a stop on defense and Goodman was fouled on the Lady Panthers’ nest possession with 1:41 to play. Goodman made one of the two foul shots, but the Blue Devils scored at the other end to cut their deficit to 52-50.

TC then forced a turnover and gave themselves a chance to tie the game, but a turnover gave the ball back to the Lady Panthers. TC guard Tamyra Carter got a steal and drove to the basket, but missed the layup that would have tied the game.

TC had three players score in double figures. Burgess led the Blue Devils with 13 points, Braxton Gipson scored 11 and Shakirria Chaney chipped in 10 in the losing cause.

The Lady Panthers will step back into region play on Tuesday, February 1 when they travel up to Zebulon, GA to take on the Lady Pirates of Pike County. Tip-off is scheduled for 6 p.m.