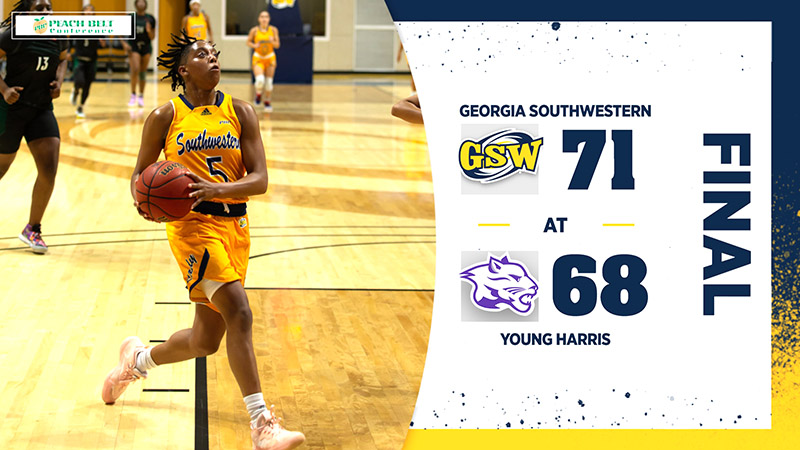 YOUNG HARRIS, GA — The Georgia Southwestern State University women’s basketball team defeated Young Harris College (YHC) 71-68 on Saturday night, January 29 for its eighth win in Peach Belt Conference play. For the second game in a row, the Lady Hurricanes made a second-half comeback to get the victory.

YHC jumped out in front early and had GSW down 23-9 late in the first quarter. This was one of the Lady Hurricanes’ largest deficits of the season. However, GSW changed the direction of the game in the second quarter and cut the 14-point YHC lead down to 33-27 at halftime.

The Lady Hurricanes struggled shooting three-pointers during the game, which allowed the Mountain Lions to stretch their six-point lead into eight to start the fourth quarter. However, the fourth quarter belonged to GSW as Jacquelyn Levay hit a three-pointer to start the scoring. Both Kayla Langley and Ava Jones then led the charge from there. The Lady Hurricanes outscored the Mountain Lions 27-16 in the final quarter and took the lead after trailing early in the first quarter.

Jones led GSW with 24 points had four steals and eight assists, which is the most assists in a game for the program since 2019 and second-most since 2016. Langley had 20 points with seven rebounds and shot 75 percent from the field for the game.